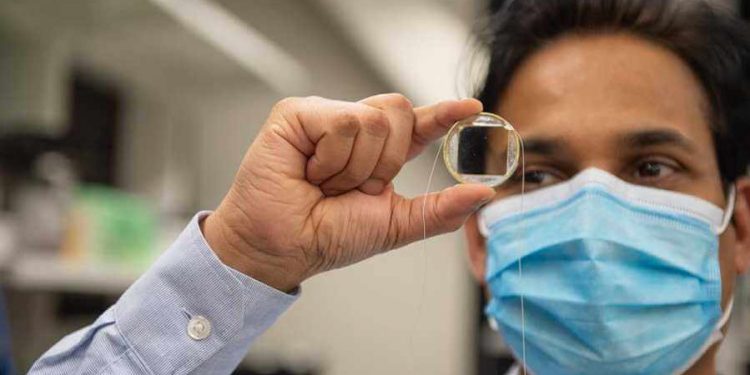 
“In the conventional ultrasound stimulation experiments, a cell culture dish is placed in a water bath, and a bulky ultrasound transducer directs the ultrasound waves to the cells through the water medium,” said Sri-Rajasekhar “Raj” Kothapalli, principal investigator and assistant professor of biomedical engineering at Penn State. “This was a complex setup that didn’t provide reproducible results: The results that one group saw another did not, even while using the same parameters, because there are several things that could affect the cells’ survival and stimulation while they are in water, as well as how we visualize them.”

Kothapalli and his collaborators miniaturized the ultrasound stimulation setup by creating a transparent transducer platform made of a piezoelectric lithium niobate material. Piezoelectric materials generate mechanical energy when electric voltage is applied. The chip’s biocompatible surface allows the cells to be cultured directly on the transducer and used for repeated stimulation experiments over several weeks.

When connected to a power supply, the transducer emits ultrasound waves, which pulse the cells and trigger ion influx and outflux.

To test the setup, Kothapalli and his team cultured bladder cancer cells on the chip. They then inserted fluorescent calcium indicators into the cells to allow researchers to clearly see dynamic changes in cell calcium signaling under the microscope during stimulation.

“Since the cells are directly sitting on the transparent transducer surface, we can confirm that all the cells are equally stimulated at the same time using a single ultrasound stimulus, unlike conventional approaches,” Kothapalli, a co-hire with the Penn State Cancer Institutesaid. “And unlike earlier processes, we can get high resolution images of many cells at once in a single field of view, because we are able to see the cells from a close distance.”

Through the bladder cancer cell study, researchers established proof-of-concept for the new transducer setup. But they can extend these findings to use the transducer setup in potential future applications, according to Kothapalli, such as stem cell differentiation, mechanosensitive neuromodulation, drug delivery and the opening of the blood-brain barrier.