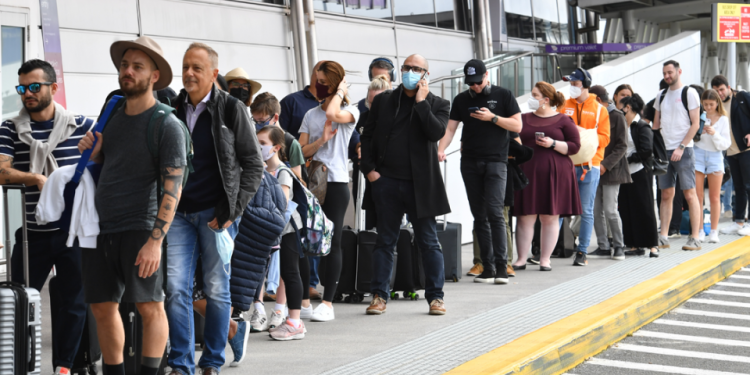 
Travellers are being advised to arrive at major airports two hours before domestic flights as staff shortages and an uptick in travel demand create major delays.

Passengers flying with Qantas, Virgin Australia and Jetstar have all been affected to varying degrees.

But while Qantas CEO Alan Joyce blamed COVID-19 for a lack of staff, a key union has instead pointed to “illegal outsourcing” and redundancies.

In the meantime, passengers are being forced to wait in what they have variously described on Twitter as “chaos”, “shambles” and “hell”.

Wotif managing director Daniel Finch confirmed to The New Daily that demand for flights out of Sydney and Melbourne surged in recent days compared to the summer holiday period.

“With crowds larger than what you might have become used to in recent times, and airports struggling with staffing shortages, it’s important to plan ahead if you have a flight booked over the coming days,” he told TND.

But the hold-ups in Sydney and Melbourne have slightly different causes.

Passengers at Sydney Airport have spent hours waiting for both check-in and security since Friday.

Long lines initially formed at the domestic terminal but have since spread to the international terminal, too.

“We have significant COVID-related staff shortages and we’re also working to rebuild our workforce in a really tight jobs market,” a Sydney Airport spokesperson told TND.

“Unfortunately this is an industry-wide issue and airports and airlines around the world are experiencing similar challenges.

“The Easter and Anzac Day long weekends are going to be busy again, and we’re advising travellers to arrive at least two hours before domestic flights and three hours before international.”

Meanwhile, those at Melbourne Airport experienced long lines on Monday as travellers returned home from the Australian Formula One Grand Prix.

“Today is the biggest day for departures that we’ve had since the pandemic started,” a Melbourne Airport spokesperson told TND.

“Post-Grand Prix and ahead of school holidays, a lot of people are getting away.”

The airport estimates 87,000 people departed on Monday, compared to the 90,000 people who arrived on Friday.

Unlike in Sydney, where long lines formed throughout the airport, the main “pinch point” for travellers in Melbourne were the Qantas check-in counters.

Mr Finch from Wotif told passengers not to be put off by the delays.

“If you’re at risk of missing your flight, be sure to alert staff at the airport as they will help to move you to a priority line,” he said.

The reason the two airports – and Qantas in particular – are backed up is hotly contested.

Mr Joyce blamed a combination of passengers taking longer than usual to get through check-in and security, and a worker shortage due to people contracting COVID-19.

But the Transport Workers Union has hit back at the CEO’s claims regarding worker shortages, arguing Qantas is squarely to blame.

In late 2020, Qantas sacked 2000 airport workers in an attempt to outsource their jobs.

The Federal Court ruled that this move breached the Fair Work Act. But although the workers will get compensation, they won’t get their jobs back.

“There are 2000 Qantas ground crew sitting at home waiting to be reinstated, after being illegally sacked so Qantas could rehire them on cheaper pay and worse conditions,” TWU national secretary Michael Kaine told TND.

“Rather than risking the health of everyone by scrapping isolation rules, Qantas could reinstate these 2000 workers to fill the gaps in our airports.”

Mr Kaine also slammed a move backed by Mr Joyce to relax isolation rules for airport staff in a bid to combat the labour shortage.

As of Friday, airport workers in New South Wales who are close contacts no longer have to isolate for seven days, provided they have no symptoms.

“Public health is not about maximising Alan Joyce’s quarterly profit results. Workers need isolation rules to stay, even if that is inconvenient to Mr Joyce,” he said.

“What Mr Joyce misleadingly calls absenteeism is actually sick leave, and every Australian worker is entitled to that.”

In total, the union says about 12,500 Qantas staff lost their jobs due to redundancies or outsourcing during the pandemic.

Qantas did not respond to a request for comment in time for publication.

But it’s not just Qantas staff who are out of action.

Other airport roles, such as security, have also yet to fully recover after a wave of redundancies earlier in the pandemic.

This has contributed to the delays experienced at terminals used by Virgin Australia and Jetstar.