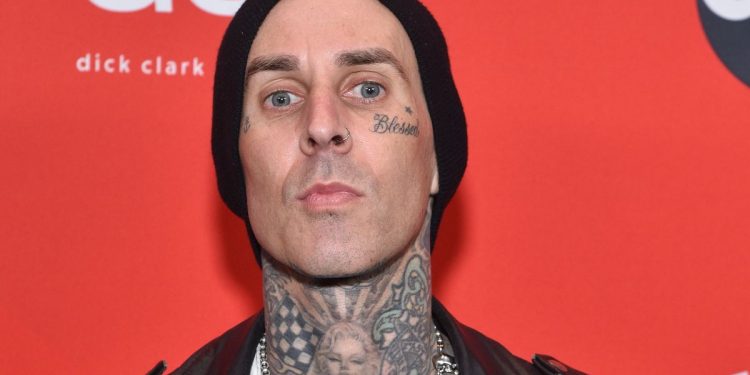 
Blink-182 drummer Travis Barker has been slammed by Reddit users after they shared a post from 2018, where he appeared to have left a ‘creepy’ and ‘inappropriate’ comment

Kourtney Kardashian’s husband-to-be Travis Barker has been slammed by fans as an ‘inappropriate’ comment he previously made about an adult star has resurfaced online.

The Blink-182 drummer, 46, has come under fire from Reddit users over his behaviour from just over three years ago in October 2018, after an old Instagram post from the musician was recently shared on the forum.

He posed with adult entertainer Lena The Plug, who is also known as Lena Nersesian, and her partner Adam22, aka Adam John Grandmaison.

The picture – which made one user feel “physically nauseous” – was seen by daughter Alabama, now 16, with many commenting on how she was likely just 12-years-old at the time – and had seen her father’s ‘creepy’ comment.

He came under fire
(

The rocker captioned the post: “She wants us both.”

Her boyfriend Adam replied: “Will trade her for some famous merchandise.”

Reddit users were left concerned over the rocker’s behaviour, with one person writing: “I’ve never had a comment make me physically nauseous before.”

A second penned: “Men with daughters always display inappropriate behavior on social media and then say things like ‘no man will ever disrespect my daughter.'”

The rocker was accused of making an ‘inappropriate comment’
(

And a third person added: “If he’s this sex-crazed, what is he going to do when the honeymoon phase ends and Kourt wants a normal relationship?”

Travis has been dating Kourtney Kardashian since last year – and the pair are set to get married.

The couple do not hold back with PDA, and have been seen kissing and hugging in public numerous times.

At the Oscars over the weekend, Kourtney and Travis gave photographers a little more than they anticipated as they shared a passionate kiss, tongues and all.

Fans weren’t overly impressed by their display and took to social media to let their thoughts known.

One fan on Twitter responded simply with a sick face emoji.

Another penned: “Pass a bucket please.”

And a third said: “Why do they insist on looking so trashy ???”

He is dating Kourtney
(

Some fans were more confused as to why she was in attendance in the first place.

“I’m so confused by the Oscars invite list… Kourtney Kardashian is there but the lead actress in an Oscar nominated film had to do a whole press tour about being snubbed in order to grab an invite? #Oscarsredcarpet #Oscars2022,” wrote one fan.

Another agreed, saying: “Kourtney Kardashian and Travis Barker on #Oscars red carpet. I have no idea what these two are doing here. Why on earth were they invited?!”

The Mirror has contacted Travis’ representative for a comment.