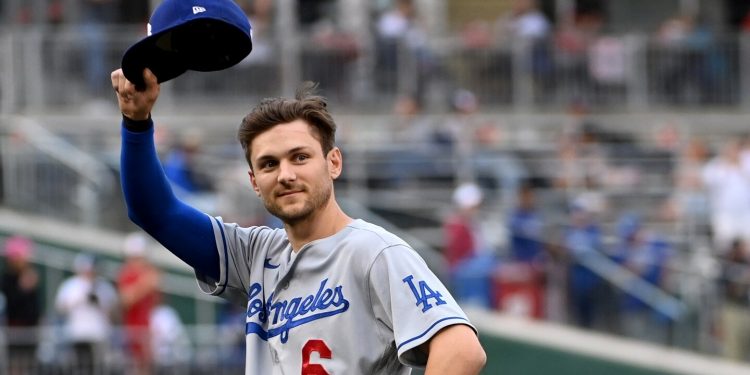 There are no two transactions that represent the rise and fall of the Washington Nationals more than the trade that landed Trea Turner and the trade that sent Trea Turner out of town. There’s a franchise life cycle in the 6½ years between those dates — Dec. 19, 2014, and July 30, 2021.

That Turner settles into town this week with a hotel room, not a house, and turns left from the tunnel toward the visitors’ clubhouse rather than walking straight into his old home digs is a contributing factor in the Nationals’ last-place standing. That he pulled on the road grays of the Los Angeles Dodgers and came up as the third batter in the top of the first inning — rather than trotting to shortstop in the home whites — is a striking reminder of where this club was and where it is now.

The trade that’s fresher in the mind is the one that represents the current state of the Nats, which is woeful: the deal that sent Turner and three-time Cy Young Award winner Max Scherzer to the Dodgers for four prospects. That Scherzer departed was painful but predictable, because the Nationals were 47-55 and eight games out in the National League East, Stephen Strasburg was out for the year and Scherzer was free to walk at the end of the season. They’re hard deals, but they’re deals you make.

Turner’s inclusion, though, sent a clear message that the reboot — the term General Manager Mike Rizzo prefers over “rebuild” — would be deeper and more traumatic than what fans and even staff members might have anticipated. His appearance back at his old home with the Dodgers, with whom he completed a season that yielded a batting title, only sprays insect repellent on a festering wound. The sting is real.

“When we traded all those guys, we made an organizational decision that we were going to get super young and we were going to transition to something different,” Manager Dave Martinez told reporters Monday. “It’s part of the game.”

The game can be cruel. The Dodgers can put Turner behind Mookie Betts and Freddie Freeman — both former MVPs — to top a lineup that entered Monday with the most runs in baseball, not to mention the highest on-base-plus-slugging percentage. Martinez is now juggling his lineup in an attempt to create a spark from rain-soaked wood, but he still ends up with Juan Soto protected by Nelson Cruz, owner of the seventh-lowest OPS in the National League. Less than three years ago, the Nationals shocked the Dodgers en route to the World Series championship. Their trajectories since are stark and staggering.

“It definitely feels different,” Turner told reporters. “But it feels good to be over here and contributing to this team, and I feel in a good spot.”

It’s a different spot than that in which his old club finds itself. But it’s also important to remember that the Nationals once were where the Nationals are now — and, frankly, worse from the top of the organization to the bottom — and that Turner’s acquisition was the kind of shrewd move that will have to be re-created if their fortunes are to turn around again.

Now, there is uncertainty here. The Lerner family is exploring the sale of the franchise. The Lerners must decide whether to pick up 2023 contract options on Rizzo and Martinez — even if someone else might be deciding whether to extend them beyond that. In Rizzo’s favor: He could look back to the 100-loss seasons from long ago and explain how a consistent contender emerged.

By the offseason of 2014-15, the Nats already had been minted as an annual threat. They won division titles in 2012 and 2014 for all sorts of reasons: Back-to-back No. 1 picks Strasburg and Bryce Harper had become contributing major leaguers; Rizzo made smart trades for starting pitchers Gio González and Doug Fister; Anthony Rendon was good enough to take over for Ryan Zimmerman at third base; on and on.

But in Rizzo’s history as a GM — one that dates from 2009 — does he have a better trade on his résumé than Steven Souza Jr. and minor league pitcher Travis Ott for Turner and Joe Ross? It says here he does not. (The complete transaction involved 11 players bouncing among the Nationals, San Diego Padres and Tampa Bay Rays.) That it took rule-changing creativity to get it done — Turner technically was not allowed to be dealt by the Padres because he had been drafted less than a year earlier, so the Nats asked if he could be included as a “player to be named later” — only adds richness to the story. Hat tip to former assistant general manager Bob Miller for that wrinkle.

Souza, an outfielder, has bounced around to five teams since; he was designated for assignment by Seattle this week. Ross has been more injured than healthy and is working his way back from having a bone spur removed from his elbow in March. But Turner? Turner is a star.

That expectation — to receive a star in return in every trade — isn’t reasonable. But part of the job of Rizzo and his staff is to find players who will help this process posthaste. On Monday night, that includes catcher Keibert Ruiz, who entered the Dodgers series hitting .353 with a .969 OPS in May. On Tuesday night, that will include right-hander Josiah Gray, who will be trying to win for the third time in his past four decisions. They are the major-league-ready pieces who came over from the Dodgers. They’re the players who, for now, must represent hope that the future includes brighter days.

Keibert Ruiz is good at making contact. Maybe too good.

Will either be as impactful as Turner? Unlikely. From 2016, when he came up to the majors to stay, through 2021, Turner racked up 25.3 Wins Above Replacement (according to FanGraphs), trailing only Francisco Lindor among players who primarily played shortstop in that span. It’s asking a lot of Ruiz or Gray — or any prospect landed in any future trade — to develop into a player of that stature.

But they’ll have to come from somewhere, which brings to mind one final, wistful notion: Hey, Trea. The Dodgers haven’t extended you. You’re a free agent this offseason. Would you consider coming back?

“I gave all that up last year — out the window,” Turner said, laughing. “After that trade, I don’t expect nothing. I don’t have any expectations. … Who knows what happens? Not me.”

Who could have known, in 2019, that Trea Turner wouldn’t be the Nationals’ shortstop in 2022? He is here this week with the Dodgers as a reminder not just of what it takes to tear down a franchise but of how it could be built up again, too.