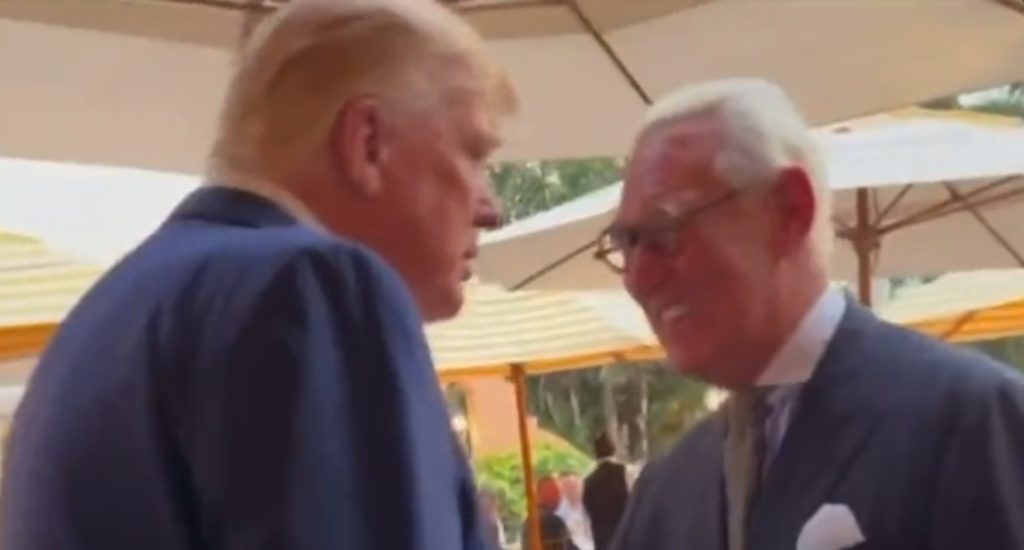 Donald Trump reunited with his longtime confidante and Republican operative Roger Stone at Mar-a-Lago this weekend – who wasted no time in getting into grievances.

Mr Stone posted a video on Rumble, a conservative social media site, and other platforms on Saturday showing him embracing the former president at his private club in Palm Beach, Florida.

In the video, Mr Trump is seen recognising Mr Stone and embracing him.

“Roger, my man! I didn’t even see you. How could I not see my Roger,” Mr Trump says.

Mr Stone responds: “God Bless You,” while Mr Trump follows up, by saying: “I hope you’re doing well, is everything OK?”

“Ron DeSantis is a piece of s***,” Mr Stone then replies, before the video clip ends.

No other context was given for the video clip, so it is unclear as to why Mr Stone insulted the Florida governor. The Independent has contacted a representative for Mr Stone for comment.

Mr Stone is currently being investigated by the House select committee on January 6th. The committee has issued him with a subpoena to obtain his testimony and communications history from that day.

The longtime Trump ally was involved in promotion of “Stop the Steal” rallies held in Washington DC on the day of the attack on the US Capitol.

He was previously pardoned by Mr Trump for lying to investigators in Special Counsel Robert Mueller’s probe of the 2016 Trump campaign’s alleged ties to Russia. Mr Stone has not been accused of any crime or wrongdoing regarding January 6th.

Florida’s Governor Ron DeSantis is seen by many as a rising star in the Republican Party and a potential rival of Mr Trump in the 2024 Republican field for the presidency.

Neither has openly stated an intent to run, though Mr Trump has hinted that he will weigh his options in the months ahead and make a decision after the 2022 midterm elections.

Mr Trump remains top of the GOP primary field in polling of prospective 2024 candidates among Republican voters. However Mr DeSantis is seen as a top choice should he decline to run.

Both Mr Trump and the GOP governor have publicly denied any trace of a feud and dismissed reports of such as attempts by the news media to divide Republicans.

“Ron has been very good. He’s been a friend of mine for a long time. It’s totally fake news,” Mr Trump told Fox News in January.

“I have a very good relationship with Ron and intend to have it for a long time,” he added.

Mr DeSantis’s rejection of Covid-19 guidelines and support of attacks on critical race theory, a bogeyman on the right that has led to efforts to ban all discussion of racism in some US schools, have earned him the respect of GOP voters in Florida. The first-term governor is currently mounting a formidable reelection campaign.

Last week his campaign announced that it had raised $100 million so far, a staggering figure that has dwarfedthe total haul of the three Democrats vying for their party’s nomination against him. It also outstrips the total spent by former GOP governor and now-senator, Rick Scott, in his 2010 bid for office or reelection campaign in 2014.

The governor’s spokesperson did not immediately return The Independent’s request for comment on Mr Stone’s video.