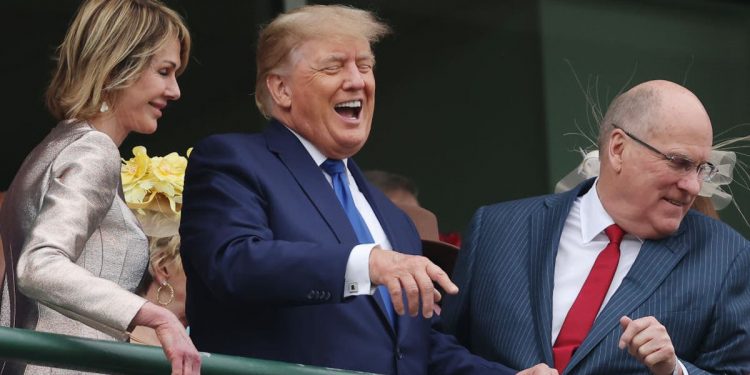 GOP governor calls on fellow Republicans to ‘move on’ from Trump

Former secretary of defence Mark Esper is still making headlines with his new book A Sacred Oath, which recounts his experiences serving under Donald Trump. Among the claims he makes is that during the Black Lives Matter protests in the summer of 2020, Mr Trump wanted to deploy 10,000 soldiers to the streets of Washington and order them to open fire on protesters.

Discussing the book on loyally pro-Trump network last night, Mr Esper confirmed he views Mr Trump as a threat to American democracy – asking host Brett Baier what other conclusion anyone could come to based on the events of 6 January 2021.

Mr Trump has hit back at the story, insisting instead that he wanted a similar deployment on 6 January 2021 to maintain order in advance of the certification of Joe Biden’s election victory. He claims without evidence that he was rebuffed.

Meanwhile, a new report has claimed that former president Donald Trump is “completely weirded out” by the various lurid stories swirling around Madison Cawthorn, the young far-right congressman who has lately been embarrassed by unflattering images and video of his lewd antics.

Esper tells Fox Trump was a threat to democracy

Brett Baier, One of Fox News’s more level-headed hosts, yesterday interviewed Mark Esper about his incendiary new book on Donald Trump’s more egregious behaviour as president – and gave the author a chance to state plainly that the ex-commander-in-chief was a threat to the future of the US’s democratic system.

Alexander Vindman, who served as a key figure during Donald Trump’s first impeachment over his efforts to extort Volodymyr Zelensky into investigating the Biden family, said last night on MSNBC that the events of January 6 “massively emboldened Vladimir Putin” – and that the possibility of an anti-democratic coup in the US was “probably one of the last tick marks on his checklist” of whether the attack on Ukraine “was going to be a low-cost exercise or not”.

One America News, the hardline Trump-friendly news network that has long propagated false stories of widespread organised fraud in the 2020 election, has issued an uncharacteristic on-air retraction of claims it made about two election workers in Georgia who were accused of manipulating the result.

Georgia is one of the states central to Mr Trump’s conspiracy theory about his defeat, but despite multiple investigations following up on his and others’ allegations, no evidence to support his various claims has been found. In addition, a grand jury has been convened to hear evidence about Mr Trump’s alleged attempt to pressure state officials into “finding” enough votes to flip the state his way.

Ken Paxton, the right-wing Texas attorney general who appeared at Donald Trump’s “stop the steal” rally before the 6 January Capitol attack, is facing potential disciplinary action from his state bar over his actions after the 2020 election. Specifically, the Texas bar is poised to include him in a lawsuit alleging he made dishonest claims in a petition to have the US Supreme Court overturn Joe Biden’s victory in four swing states.

Mr Paxton is a dogged Trump supporter who has been under indictment on criminal fraud charges for several years.

Pelosi: The US “needs a strong Republican Party”

Speaking at an event yesterday, Nancy Pelosi reiterated a point she has made several times before: that the Republican Party has moved so far away from its days representing the centre-right that it now resembles a “cult” – and that this is to the detriment not just of the party itself, but to the country, which would benefit from having a GOP that operated within the bounds of normality.

Take a look at her remarks below.

The New York Times’s Maggie Haberman last night shared some choice Trump quotes from a National Republican Congressional Committee fundraiser, where it seems the former president was in an upbeat mood:

“You are going to be held accountable for this, bro.”

The House select committee investigating the 6 January Capitol riot are inching closer to issuing subpoenas to Republican members of Congress to compel their cooperation.

The panel is expected to make a final decision on the subpoenas over the next couple of weeks ahead of the public hearings in June, sources familiar with the matter told The Guardian.

According to sources, Republican leaders’ refusal to assist the investigation in any form has caused a stir among the members of the committee, prompting them to deliberate issuing subpoenas.

Esper says he believes Trump was a ‘threat to democracy’

Former defence secretary Mark Esper said he believes Donald Trump was a threat to democracy, alleging that his actions led to the Capitol riots last year.

“I think that, given the events of 6 January, given how he has undermined the election results, he incited people to come to DC, stirred them up that morning, and failed to call them off, to me, that threatens our democracy,” Mr Esper told Fox News on Monday.

The former defence secretary said he hopes his former boss doesn’t run for office in 2024.

In his upcoming book A Sacred Oath: Memoirs of a Secretary of Defense During Extraordinary Times, Mr Esper recounts a conversation in 2020 where the former president said: “We could just shoot some Patriot missiles and take out the labs, quietly.”

Pentagon officials were alarmed at the potential effect the revelation could have on US-Mexico relations, CNN reported, citing sources.