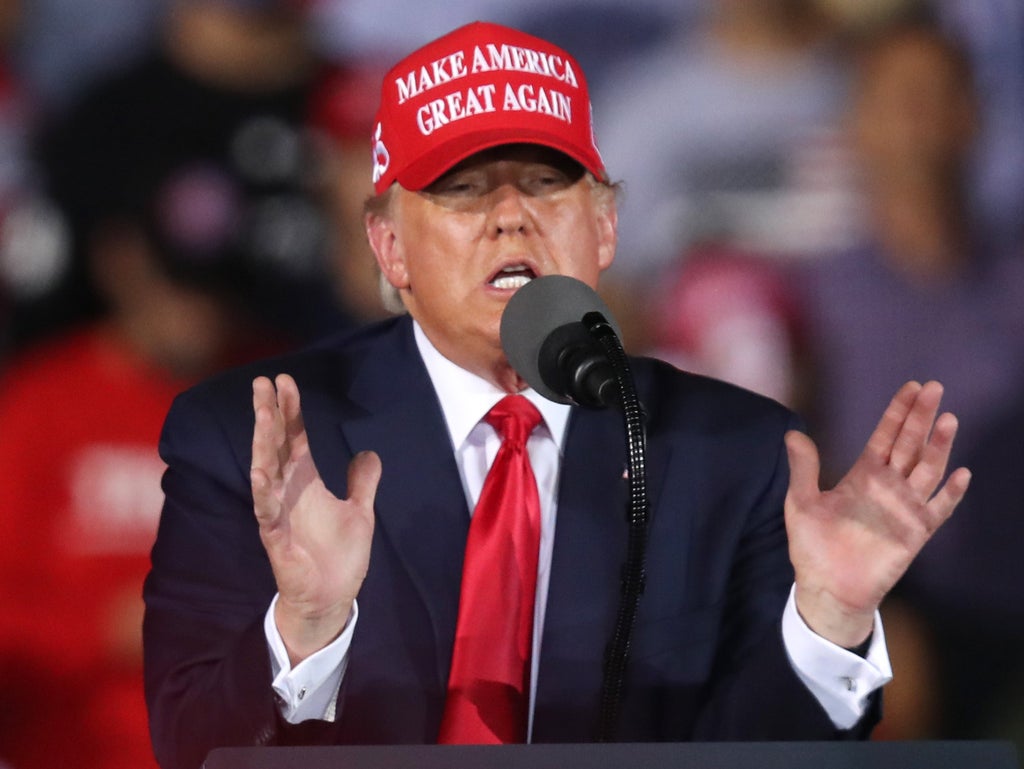 He may have been kicked off of Twitter, but Donald Trump has been anything but quiet since leaving office. Now he’s officially returning to the campaign trail for the first of his signature, raucous rallies since leaving the White House in disgrace in January, after his supporters stormed the US Capitol.

The event will be held in the town of Wellington, Ohio, southwest of Cleveland, and will mark the start of a multi-state tour that will feature a trip to the US – Mexico border and a rally in the former president’s new home state of Florida.

At the rally, Mr Trump is expected to go after Anthony Gonzalez, one of the 10 House Republicans who voted for his second impeachment, and back his primary challenger, former White House aide Max Miller.

The former president, who has been ramping up his media presence in recent days—bashing former allies like his vice-president Mike Pence and speaking about the GOP’s upcoming elections—may also use the event to further his ambitions for a political comeback in the 2024 presidential election. Mr Trump is still immensely popular with the GOP base, and this rally is a reminder.

‘QSENT ME’: Flag-adorned Trump Train arrives in Ohio ahead of rally

In addition to his bombastic remarks, Donald Trump rallies are usually accompanied with a “Trump Train” of vehicles bearing flags and slogans. Ahead of his remarks in Ohio tonight, photos from the venue show the Trump Train is still going strong, and still attached to mass conspiracies like the Qanon movement.

Prosecutors in New York are closing in on the Trump Organization, the former president’s family business. If they go through on their threats to file criminal charges, that would be a “death blow” to the company, according to a former impeachment lawyer.

Conspiracy theory that Trump will be reinstated in August has officials worried, report claims

The idea has been floated by people close to the former-president including Sidney Powell, an attorney who is being sued over her claims that Mr Trump was cheated out of re-election by a conspiracy involving the operators of voting machines and communist leaders in Venezuela, and Mike Lindell, the MyPillow CEO also facing legal action for a series of far-fetched claims about the 2020 vote.

The Independent’s Phil Thomas has more.

Donald Trump is riding high politically, still enjoying massive popular support within the GOP, but authorities are circling around his business affairs in New York, threatening criminal charges as part of a long-running investigation into the Trump Organization.

That would be a “death blow” to the business, triggering a likely bankruptcy, according to Daniel Goldman, one of the lawyers who worked on prosecuting Donald Trump’s two impeachments.

Donald Trump’s Ohio rally may give us a window into his future in the GOP, but information is still emerging about the chaotic days of his past tenure in office.

For one, the former president got aides to draft an order allowing him to use troops against George Floyd protesters, according to a new report. White House aides drafted a proclamation that the former president would use to invoke the Insurrection Act in case he decided to deploy active-duty troops to end racial injustice protests in Washington DC, sources told The New York Times.

Graeme Massie has the details.

What will Donald Trump say at his comeback rally in Ohio?

We should all know by know that trying to predict exactly what Donald Trump will say is a fool’s errand. But there are a couple key points he’s expected to hit at his upcoming rally in Ohio, the first such event since he left office in January under a cloud of scandal.

–Disloyal Republicans: Mr Trump is expected to go after Anthony Gonzalez, one of the 10 House Republicans who voted for his second impeachment, and back his primary challenger in Ohio, former White House aide Max Miller. The former president has vowed to campaign against all the GOPers who went against him on impeachment, so don’t be surprised if he lashes out at others like Liz Cheney or Lisa Murkowski.

–The never-ending campaign: The 2020 election is barely over, which means the 2022 election is already here in Washington terms. Donald Trump has already formed a new super PAC and is likely to be an important power broker during the midterms, given his immense popularity and visibility with the Republican base.

–Himself: This is the former president’s famous subject. The rally will no doubt feature snippets about his political ambitions, perceived slights and grievances, and anything else that crosses Mr Trump’s mind.

Good morning and welcome to The Independent’s live coverage of Donald Trump’s campaign-style rally in Ohio, which could prove to be a pivotal jumping off point for his 2024 political ambitions and beyond.