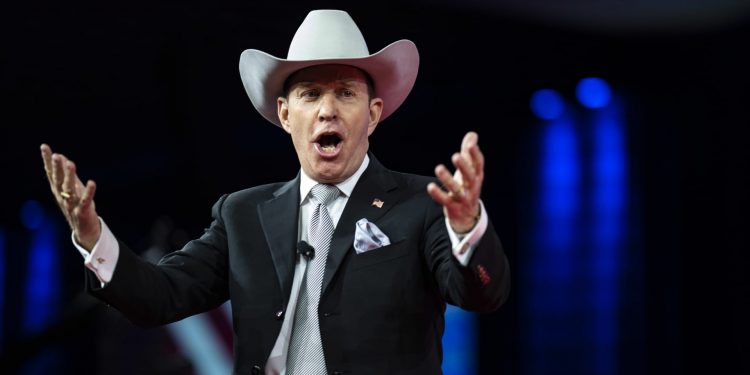 Former President Donald Trump’s preferred candidate is projected to lose Nebraska’s GOP gubernatorial primary, signaling that Trump’s influence in the party has its limits — even in Republican stronghold states.

University of Nebraska Regent Jim Pillen, who was endorsed by current Gov. Pete Ricketts, prevailed in the tight primary race, NBC News projected Tuesday. Pillen is poised to advance to the general election on Nov. 8, where he is expected to defeat his Democratic rival, Carol Blood, in the reliably red state.

Nebraska has had a Republican in the governor’s mansion since 1999. Ricketts is term-limited from running again.

Pillen was one of three front-runners in the competitive primary fight, along with Charles Herbster, the Trump-backed business executive whose campaign was rocked after multiple women accused him of sexual misconduct.

University of Nebraska Regent Jim Pillen smiles to applause as he is named the winner of the Nebraska Republican gubernatorial primary during an election night party at the Embassy Suites on Tuesday, May 10, 2022, in Lincoln, Neb.

Herbster, a first-time gubernatorial candidate who poured millions into his campaign, has denied the allegations made by eight women, including a Republican state senator.

The loss puts a blot on Trump’s so-far sterling endorsement record for the 2022 midterm elections, and could hint at the former president’s enduring influence in the Republican Party.

Herbster’s defeat “would indicate that in Nebraska, there are limits to [Trump’s] endorsement,” said Gregory Petrow, a political science associate professor studying campaigns and elections at the University of Nebraska Omaha. He noted that the Cornhusker State has a tradition of supporting more independent-minded leaders, such as GOP Sen. Ben Sasse.

Petrow acknowledged that Trump won the popular vote in Nebraska by wide margins in 2016 and 2020, but that “doesn’t necessarily imply that the state is completely won over by his approach.”

Even after losing the 2020 election to President Joe Biden, the former president has remained the de facto leader of the GOP, holding sway over a major chunk of the party’s base. He has strongly hinted that he may run for president again in 2024, though a growing list of Republicans also be mounting their own White House bids.

Herbster had closely tied himself to Trump and his allies since receiving the former president’s endorsement last fall. Herbster self-funded the bulk of his campaign, contributing a total of $11.3 million to his gubernatorial bid this year, campaign finance filings show.

Nebraska’s GOP primary was an uncommonly competitive three-way fight between Herbster, Pillen and state Sen. Brett Lindstrom. Recent surveys showed all the three front-runners polling within the margin of error.

That remained the case even after the Nebraska Examiner printed allegations from eight women that the 67-year-old Herbster had groped or inappropriately touched them in recent years.

Most of those women spoke to the news outlet on condition of anonymity. But one of the accusers was Julie Slama, a Republican state senator who accused Herbster of reaching up her skirt without her consent in the middle of a crowded ballroom during a Republican Party dinner in 2019.

Herbster denied all the accusations, calling them “libelous” and “100% false.” He has filed a defamation suit against Slama, who is countersuing and alleging sexual battery.

Trump campaigned with the embattled candidate at a rally in Greenwood, Nebraska, days after the Examiner’s report had thrust Herbster into the national spotlight. Donald Trump Jr., the former president’s oldest son, had also campaigned with Herbster at multiple stops in Nebraska in the run-up to the event.

“He’s been badly maligned, and it’s a shame,” the senior Trump said of Herbster at the May 1 rally. The former president claimed without providing evidence that Herbster is “innocent of these despicable charges.”

Trump himself has been accused of sexual misconduct by many women in incidents spanning decades. He has denied the accusations against him.

Luna Nosedives Under $2, Loses 98% Of Its Value As TerraUSD Struggles To Regain Its Dollar Peg – Forbes