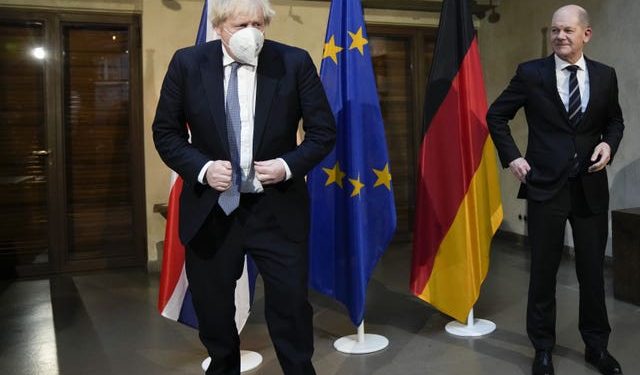 Liz Truss will meet with her Polish counterpart in Warsaw after leading the call for Western allies to supply Ukraine with more weapons to push back the Russian assault.

The Foreign Secretary will hold talks with foreign minister Zbigniew Rau on Tuesday on her second day in Poland’s capital.

The discussions come after Ukraine claimed victory in Kyiv but warned that Russian president Vladimir Putin is turning his attention to taking the east and the south of the embattled country.

Ms Truss used a press conference speech on Monday to call for more weapons to be supplied to Ukrainians defenders as she urged European nations to strengthen Kyiv’s position in the peace talks with Moscow.

The Cabinet minister said the UK was “pulling all the stops out in terms of supplying Ukraine with the support they need”, in a bid to end the “appalling war” and ensure Mr Putin loses.

Speaking in Warsaw, the Foreign Secretary said: “We need even more weapons of the type the Ukrainians are asking for.

“The fact is that being tough is the only approach that will work.

“Putin has escalated this war and this approach is vital to ensuring he loses in Ukraine and that we see a full withdrawal of Russian troops and Ukraine’s hand is strengthened at the negotiating table.”

Ukrainian foreign affairs minister Dmytro Kuleba warned of a “large-scale” assault on the east and south of his country as Russian troops regroup, having been pushed back from the capital.

He told reporters, during a joint press briefing with Ms Truss, that there had been “some hesitation” in the West about providing Ukraine with “all the weapons that we are asking for”.

Mr Kuleba added: “The more weapons we have, the sooner we will be able to win this war and prevent Russia from committing more crimes.”

Ms Truss, in a united plea with her Ukrainian colleague, urged the West to step up economic sanctions on the Kremlin amid reports of splits in Europe on how to respond to what appeared to be deliberate killings of civilians by withdrawing Russian forces.

Mr Kuleba urged Nato foreign ministers, who are due to meet in Brussels later this week to discuss further sanctions, to visit Bucha and other towns and villages outside Kyiv, where atrocities have allegedly been carried out, if they have doubts about the need for further action.

Ukrainian officials said the bodies of 410 civilians were found in towns around the capital that were recaptured from Russian forces in recent days.

Discoveries include mass graves and people dressed in civilian clothing who appeared to have been shot at close range, with some having had their hands tied behind their backs.

In the face of such bloodshed, Germany has faced criticism for opposing an immediate halt to Russian energy deliveries.

Berlin has said it hopes to end Russian coal imports this summer and oil imports by the end of the year, but halting gas will take longer since it relies more heavily on the power source.

Poland’s prime minister Mateusz Morawiecki used a speech on Monday to criticise German Chancellor Olaf Scholz, accusing him of paying too much heed to the “voices of German businesses” rather than the innocents slain in Ukraine.

Prime Minister Boris Johnson is likely to urge Germany to set a date for phasing out Russian gas when he meets Mr Scholz in Downing Street on Friday, according to The Times.

Mr Zelensky visited the town of Bucha on Monday, where reports of mass civilian casualties have emerged.

Meanwhile, on Monday more people were successfully evacuated from the besieged port of Mariupol, where Mr Kuleba said there had been worse horrors than in Bucha.

Ukrainian deputy prime minister Iryna Vereshchuk said a total of 2,405 people were evacuated along a humanitarian corridor route running from Mariupol to the Ukraine-held city of Zaporizhzhia, with 1,553 of those coming from the city itself and the rest from other locations in the heavily contested area along the Sea of Azov.

Why Is Kansas Called the Jayhawks?

Why Is Kansas Called the Jayhawks?