“Truth” Be Told, Errol Spence Looks Better Than Ever In Beating Up Yordenis Ugas 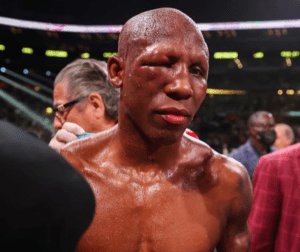 
Errol Spence promised a show at AT & T Stadium in Arlington, Texas, his home turf, on Saturday night, he’d said all week he’d give folks great bang for their buck. The man nicknamed “The Truth” wasn’t lying. He started hard on Yordenis Ugas in round one and didn’t relent. Ugas hung tough early but as the fight went into the second half, the Texan’s battering took a toll. In round ten, the ref had the doctor look at Ugas, and his swollen right eye and the physician said no mas. At 1:44, in front of almost 40,000 patrons, Spence signaled that Canelo’s hold on the No 1 pound for pound slot isn’t a lock. The welterweight standard bearer followed his most impressive showing with an almost as solid post-fight chat with Showtime PPV’s Jim Gray.

“I didn’t want a tune up fight, I knew Ugas was going to bring the best out of me,” the winner said when asked for his take on the bout. He shared that he ditched junk food, and that helped explain his sharpness. And what’s next? “Everybody know who I want next. I want Terence Crawford next. That’s the fight that I want, that’s the fight that everybody else wants. Like I said, I’m going to get these straps and go over there and take his shit too. Man down, strap season, yawl know what time it is baby. Terence, I’m coming for that motherfuckin’ belt!”

The southpaw Errol Spence, age 32, held a 27-0 (21 KOs) record entering, along with the WBC and IBF 147 crowns. He last gloved up in December 2020, as a planned clash against Manny Pacquiao went off the rails. An impaired left eye was detected, and so the Texan had to get a detached retina surgically repaired, and then sit and let it heal. Plenty of fans and pundits offered their thinking that Ugas was not a smart foe to agree to after that eye affair, being that the Cuban beat Pacman, when he subbed in for Spence after the eye situation came to light.

Spences’ rep got burnished after being stained by a 2019 car crash. He rolled his Ferrari and flew from the vehicle after partying too hearty, but managed to not die. He’d been drifting some, and hadn’t looked ultra sharp in his Sept. 28, 2019 battle against Shawn Porter. The crash woke him up, apparently, because he came back on Dec. 5, 2020 against Danny Garcia looking darn close to prime. When has Errol Spence looked better?

Ugas, age 35, came in with a 27-4 record, and 12 KOs on his resume, along with the WBA 147 strap. A pro since 2010, his late inning resurgence has been something else to watch. He had to beg and politick to get bouts against top level hitters. He lost to Shawn Porter in their 2019 tussle, though not everyone agreed with the judges’ call. His handling of Pacman, on 11 days notice, put him in a position to get this assignment, a unification clash with Spence. Backers of Ugas coming in liked the fact that Spence hadn’t gloved up in 16 months.

As for the stakes, the man holding the WBO welter strap, 34 year old Terence Crawford (38-0), watched and pondered what it would feel like to have Spence win and next accept a fight versus the Nebraskan. In the first, both men worked to the body, it was a fairly busy session for an opening frame. In round two, Errol Spence was the aggressor, he was busier, as Ugas mostly looked to land a counter. The Ugas jab was tight and sharp but against a lefty, he wasn’t going to throw it as often as he would against a righty.

In the third, Spence was a man possessed. His volume was upped, he was clearly wanting to accelerate breaking down Ugas. But the Cuban’s chin and body didn’t betray him, he hung tough and was landing a few sharp rights.

In the fourth, the distance tightened even more. Both smashed to the body. Errol Spence, though, truly looked massively fired up to put on a sterling showing. Trainer Derrick James counseled Spence to not stay around to eat a counter after the round.

In the fifth, Spence looked fresh as in round one. Was Ugas getting broken down? Looked like it, but he’d then fire a counter to show he wasn’t fading too badly.

In the sixth, Ugas hurt Errol Spence, who stumbled and then thought the ref would step in, but he didn’t and Ugas hurled another shot. The Texan collected himself though and got back to work. In center ring, Spence tried to steal the round late. Replay showed that an uppercut knocked Spence’s mouthpiece out and that distracted him, so the Cuban launched a one-two.

In the seventh, Errol Spence turned it up. He was in assault mode. Ugas smiled but did he really mean it? He landed a sharp right, did it lightly buzz the Texan?…but Errol kept on thumping. In the eighth, the right eye of Ugas looked bad. Errol was whacking away at the piñata, the Cuban whose legs were now leaden.

In round 9, Ugas looked near done. And then he’d rip a right. But the right eye was bad in the tenth and he was backing up, and Errol Spence just kept coming. The ref Laurence Cole brought Ugas to the doc, and the physician told him that was it. He protested, but knew in his heart fighting on would mean a more brutal finish to the fight.