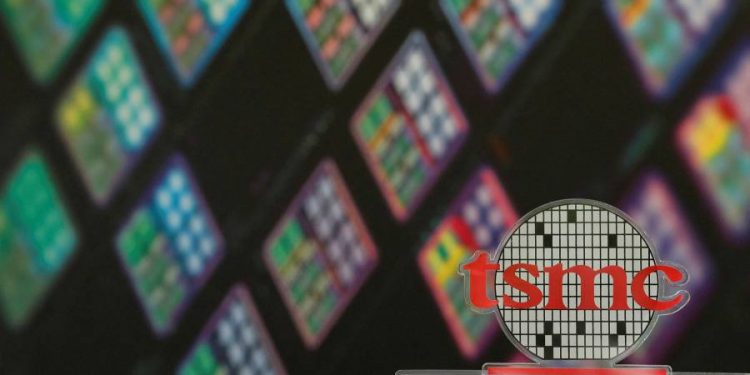 Revenue from high-end processors, the complex chips that power servers, accounted for a larger chunk of TSMC’s revenue than smartphone chip sales for the first time. The shift marks growing demand from cloud service providers Google, Microsoft and Amazon and decreasing dependence on Apple.

The Taiwanese company on Thursday forecast a 37 per cent jump in revenue to $18.2bn for the June quarter compared with the same period last year said growth could exceed 30 per cent for the full year.

TSMC raised its forecast after beating its previous guidance and analysts’ expectations to post earnings of NT$202.7bn ($6.9bn) in the first quarter, up 45 per cent year on year.

The boost for TSMC contrasts with a rapidly darkening outlook for the global economy as the Ukraine war drives soaring inflation and Beijing’s strict pandemic control measures fuel slowdown fears in the world’s second-largest economy.

TSMC, which accounts for more than half of global supply of made-to-order chips, acknowledged that demand for some electronics gadgets, including smartphones, computers and tablets, was suffering from the macroeconomic disruption.

But it said strong growth in demand for chips used in high-performance computing (HPC) applications, such as servers to process artificial intelligence functions, was offsetting that.

“Inflation definitely impacts consumer buying patterns, but while some end markets might adjust in terms of number of devices, the demand for greater computation power and more energy-efficient computing offsets that,” said CC Wei, chief executive. “We expect our business to be supported by HPC and automotive demand.”

Revenue from sales of chips for HPC applications and for automotive applications both grew 26 per cent in the first quarter, while revenue growth from smartphone chip sales was down to just 1 per cent. HPC now accounts for 41 per cent of the company’s total revenue, overtaking smartphones as its largest end-use segment.

Analysts believe that shift will make TSMC less vulnerable to cyclical swings as its revenue comes from a broader array of customers.

TSMC said it expected capacity to remain tight until the end of the year. Production capacity at the five largest contract chipmakers, or foundries, has been 100 per cent utilised since the second quarter last year, according to Bain, the consultancy.

Although manufacturers of logic chips, which TSMC specialises in and are used in many products, have pledged to almost double capital expenditure between 2021 and 2025, that extra capacity will not come online until 2024 or later, according to Bain.

TSMC issued an indirect warning that the rollout of that capacity could hit further delays as new problems have appeared in the supply of crucial manufacturing machinery.

“We see this kind of tool delivery problem unexpectedly from the beginning of this year,” Wei said. Although TSMC’s capacity expansion this year would not be affected, he suggested new production lines planned for next year and beyond could suffer.