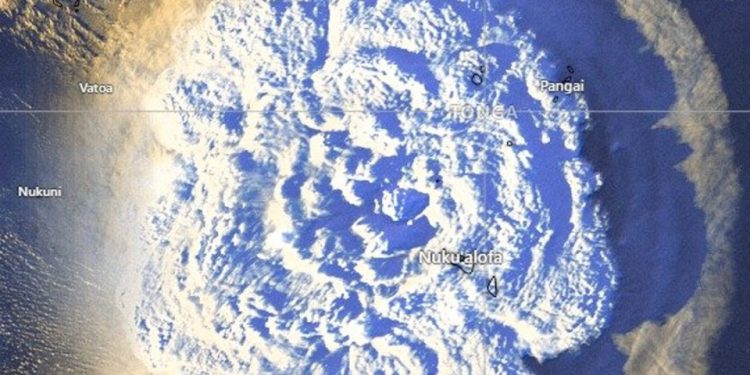 Pacific Rim nations, including Australia and New Zealand, are breathing easier as the threat recedes of a tsunami generated by a huge undersea volcanic eruption near Tonga.

Australian authorities issued a tsunami warning for parts of the east coast and Lord Howe, Norfolk and Macquarie islands after the volcano erupted on Saturday night. In New Zealand, officials warned of possible storm surges.

The extent of damage to Tonga remains unclear, however, as flooding that followed the mega-blast has thrown communications into chaos and largely cut off the island nation from the rest of the world.

Satellite images caught the spectacular eruption as it happened amid a plume of ash, steam and gas that rose like a mushroom cloud above the blue Pacific waters.

The eruption was so powerful its sonic boom could be heard as far away as Alaska.

In nearby Tonga, it sent tsunami waves crashing across the shore and people rushing to higher ground.

The eruption cut the internet to Tonga, leaving friends and family members around the world still anxiously trying to tally the extent of damage and any injuries.

Even government websites and other official sources remained without updates.

Dave Snider, the tsunami warning co-ordinator for the National Tsunami Warning Center in Palmer, Alaska, said it was very unusual for a volcanic eruption to affect an entire ocean basin, and the spectacle was both “humbling and scary”.

The tsunami waves caused damage to boats as far away as New Zealand but did not appear to cause any widespread damage. Snider said he anticipated the tsunami situation in the US and elsewhere to continue improving.

The US Geological Survey estimated the eruption caused the equivalent of a magnitude 5.8 earthquake.

The Tonga Meteorological Services said a tsunami warning was declared for the whole archipelago, and data from the Pacific tsunami centre said waves of 80 centimetres were detected.

Tonga gets its internet via an undersea cable from Suva, Fiji, which presumably was damaged. All internet connectivity with Tonga was lost at about 6.40pm local time.

On Tonga, home to about 105,000 people, video posted to social media showed large waves washing ashore in coastal areas and swirling around homes, a church and other buildings.

New Zealand Prime Minister Jacinda Ardern said images of the eruption were “hugely concerning” and agencies were still trying to establish full communications with the country.

In Hawaii, the Pacific Tsunami Warning Center reported waves that measured 50cm in Nawiliwili, Kauai and 80cm in Hanalei.

The explosion of the Hunga Tonga Hunga Ha’apai volcano was the latest in a series of dramatic eruptions.

Satellite images show how drastically the volcano had shaped the area, creating a growing island off Tonga.

Following Saturday’s eruption, residents in Hawaii, Alaska and along the US Pacific coast were advised to move away from the coastline to higher ground.

The first waves to hit the continental United States measured up to 59cm in Alaska.

A wave of about 79cm was observed in Monterey, California, according to the US National Tsunami Warning Center.

Residents of American Samoa were alerted of a tsunami warning, but as night fell, there were no reports of damage and the Hawaii-based tsunami centre cancelled the alert.

Authorities in nearby Fiji and Samoa also issued warnings, telling people to avoid the shoreline due to strong currents and dangerous waves.

Hundreds of thousands of Japanese citizens were advised to leave their homes on Sunday as waves of more than a metre hit coastal areas.

Others reported that many boats were damaged by a tsunami that hit a marina in Whangarei.

Satellite images showed a 5km-wide plume rising about 20km after the eruption began early on Friday.