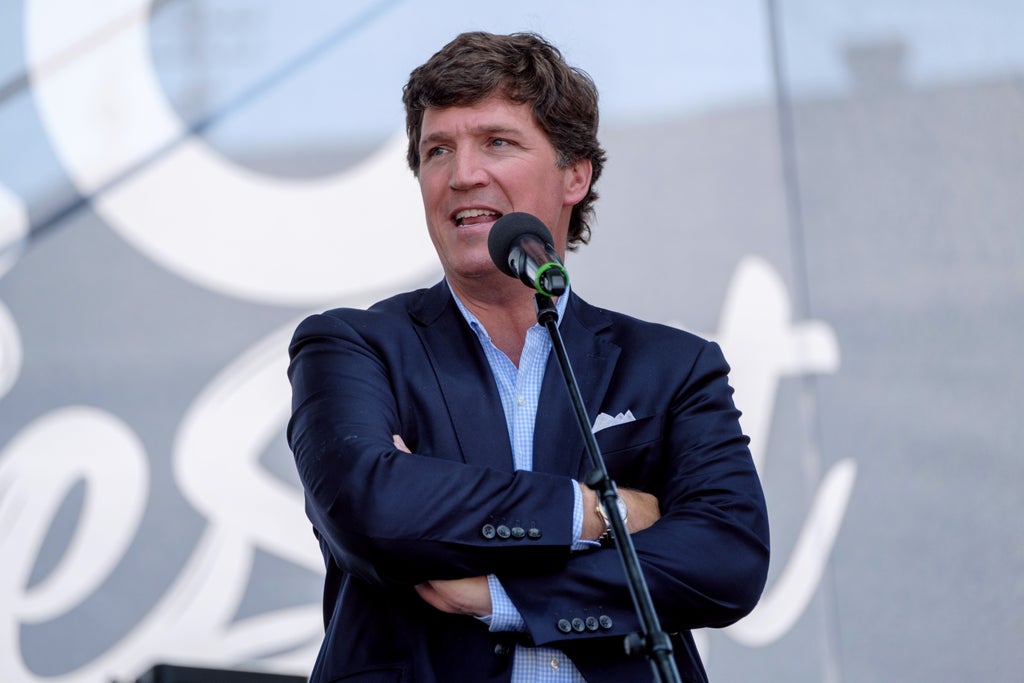 Fox News host Tucker Carlson has claimed many of the suspects arrested over the Jan 6 riot had “merely walked down the hall” of the US Capitol building.

In his latest attempt to defend the more than 700 people arrested and charged with offences, the 52-year-old anchor delivered a scathing attack on those he claimed were trying to enforce unpopular rules such as vaccine mandates, and rewrite America’s history.

In an 30-minute address before a crowd of young conservatives gathered in Phoenix, Arizona, Carlson praised the courage and accessibility of Teddy Roosevelt, the 26th president of the United States, who served from 1901 to 1909. He claimed the people of that era would have responded very differently to the events of January .

He said that Roosevelt, who had been vice president, had assumed the presidency only after the then president, William McKinley, was assassinated.

He claimed that Roosevelt wanted to get to know ordinary citizens and did so by going and speaking with them outside of the White House, saying that while it was his residence, it was their home as well.

“So Teddy Roosevelt knew perfectly well the costs of opening himself up to the public,” said Carlson.

“He was a very brave person. He had great physical courage personally, but he also didn’t have much of a choice, because it wasn’t his house ,it belonged to the people to whom the country belongs, and those are American citizens.”

He added: “So imagine telling someone living in that country, we just arrested people for walking down the hall in the Capitol building. Not those who broke the windows, the people who literally walked down the hall of the Capitol. And we arrested a lot of them.”

The comments, delivered live at an event organised by Turning Point USA, a group of young conservatives founded by Charlie Kirk, that calls itself a “student movement for freedom, free markets and limited government, were merely the latest in a succession of remarks that have played down the seriousness of events on January 6, that resulted in the deaths of five people, including a police officer.

The incident, which saw hundreds of supporters of Donald Trump storm into the Congress in an attempt to halt the certification of the election of Joe Biden, resulted in violent clashes, with police trying to prevent the demonstrators entering the building, that were seen around the world.

Just hours before the incident, Mr Trump had addressed a crowd of supporters, in which he urged vice president Mike Pence not to chair the certification process and said they had to “fight like hell”.

Three months after the incident, which led Democrats to seek to impeach Mr Trump for a second time, only for him to be once again given a life-line by Republicans in the Senate, Carlson said the crowds had “just walked into what we used to refer to as The People’s House”.

Speaking in a tone heavy with sarcasm on his own show, the highest rated of any on cable news, he said: “Today is the three-month anniversary of January 6th. For those who aren’t good with dates or don’t have calendars, this is the day we pause to remember the White supremacist ‘QAnon insurrection’ that came so very close to toppling our government and ending this democracy forever. You saw what happened. It was carried live on television, every gruesome moment.”

During his speech on Saturday, Carlson also mocked Mr Biden’s age and attacked him for trying to force people to get vaccinated.

He urged the crowd not to “participate in the systems that are oppressing people, [and] making them sad”.

He said: “Hey, 50-year-old nurse, get the shot – this nurse who just like spent two years helping Corona patients who knows more about medicine than Joe Biden ever will – or you’re going to get fired, because somehow some 79-year-old elected official knows more about science than a frontline nurse.”

Carlson has recently been promoting a three-part series called Patriot Purge, which was released on the network’s right-wing streaming service Fox Nation.

In the series, Carlson suggests those involved in the storming of the Capitol were not Mr Trump supporters, but rather his enemies, including violent leftist antifa groups and even the FBI.

In the first episode he says: “Jan 6 is being used as a pretext to strip millions of Americans, disfavored Americans, of their core constitutional rights.”

Carlson is one of several dozen leading conservatives to speak to the event. Donald Trump Jr is also to address the audience, while Kyle Rittenhouse, who was recently cleared of murder charges after shooting three people in Wisconsin, two of them fatally, will be interviewed live on Monday.