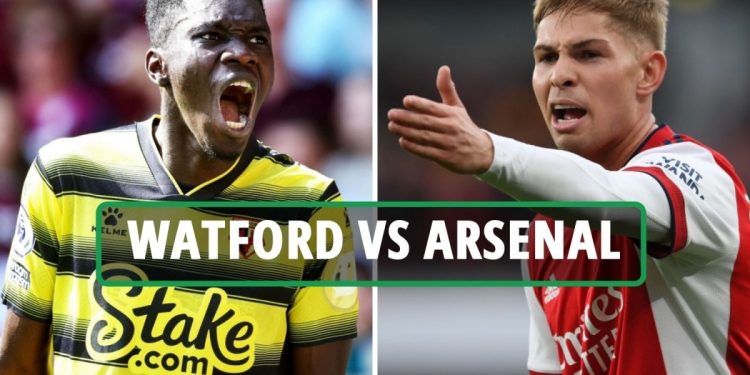 
ARSENAL travel to their training ground neighbours Watford THIS WEEKEND in the hunt for landing a Champions League spot.

The Gunners have recovered from their nightmare month of January because they are going into this game with three wins on the spin.

Disregarding the score-line, Mikel Arteta’s side comfortably dealt with Brentford and Arsenal did the league double over Wolves which included a dramatic 2-1 thriller in the second game.

Watford find themselves in a real relegation scrap heading into the business end of the season and time is running out for Roy Hodgson’s side to avoid the drop zone.

However, the Hornets stunned Old Trafford on the weekend by holding Manchester United to a 0-0 stalemate so all hope is not lost for the Hertfordshire outfit.

What time does Watford vs Arsenal kick off?

What TV channel is Watford vs Arsenal on and can I live stream it?

Watford pair Peter Etobo and Kwadwo Baah are both on the road to recovery having featured in a couple of U23 matches so there’s a slim chance that they could be involved on the weekend.

However, Cameroonian defender Nicoals Nkoulou is still a little way off returning to the matchday squad.

Mikel Arteta only has Takehiro Tomiyasu to be concerned over because the Japanese international hasn’t figure in six of Arsenal’s last eight games.

Speaking on Tomiyasu’s absence after the Wolves encounter, the Gunners boss said: “So he came back and he was completely fine, and in training he felt the other calf.

“So this is an issue because he’s a professional, who is giving absolutely everything to help us and in the last few months, he’s not been fit.

“Imagine the body as a set of chain links when one is weakened, the other pick up the slack, right?”

Emile Smith Rowe also missed out on the thrilling 2-1 win at the Emirates due to contracting Covid-19, but the Englishman is expected to return.

*Odds courtesy of Betfair are correct at time of publication.