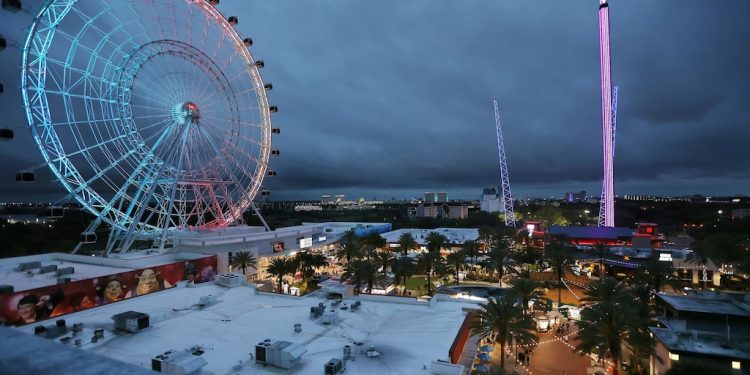 During a news briefing, Mina offered his “deepest condolences” to Tyre’s family and friends. “We can’t image the pain and anguish that his family must be going through,” the sheriff said.

It is not yet known how the teen fell, but it does not appear that any other riders were injured. Mina said deputies are investigating whether Tyre’s death was an accident, describing it as a “terrible tragedy.”

The Florida Department of Agriculture and Consumer Services (FDACS) will investigate any potential safety issues.

The Orlando Free Fall ride, which opened in December, has been closed indefinitely during the investigation, and its sister ride, the Orlando Slingshot, has been closed temporarily out of respect for Tyre’s family, said John Stine, a spokesman for the Slingshot Group, which owns and operates the rides.

“We are devastated,” Stine told The Washington Post. “Our heart goes out to the family of this young man.”

Tyre was a football player and had dreams of playing in the NFL, his father said. Yarnell Sampson said his son, who was 6-foot-5 and more than 300 pounds and lived in St. Louis, was visiting Orlando through a football program.

Sampson told FOX 35 Orlando that his son went on the ride with two close friends and, when the ride began, “he was feeling uncomfortable. He was like, ‘What’s going on?’ That’s when he started freaking out, and he was explaining to his friend next to him, ‘I don’t know, man. If I don’t make it down, please tell my mom and daddy I love them.’ For him to say something like that, he must have felt something.”

Sampson told NBC-affiliate WESH that he learned of his son’s death when he saw a video of the fall on social media.

“It felt like somebody hit me so hard in my stomach. I just lost, I lost, lost wind. And the pain behind it could never be taken away, and sorry’s not gonna take it back and no monies, no nothing in the world to replace the young man. And it’s just sad, a young man’s bright future was taken away from him over a ride, an amusement park,” he told the network.

The family, which has hired Ben Crump as its attorney, say it wants answers, according to news reports.

Officials with the Orange County Sheriff’s Office said the investigation into the teen’s death is in the “very early stages.” No further information is available at this time, police said.

The U.S. Consumer Product Safety Commission, which collects data on incidents involving amusement-park rides, said the most recent numbers show an annual average of 34,700 injuries associated with amusement attractions, including waterslides, from 2017 to 2019, and 12,400 injuries reported by hospital emergency departments in 2020. The decrease in 2020 is probably the result of closures because of the coronavirus pandemic, the commission said.

Since 2018, at least 14 deaths — not counting Thursday’s incident — have been associated with amusement park attractions, according to the agency.

The Orlando Free Fall rises high into the sky while rotating in a circle, giving up to 30 riders a view of ICON Park, according to a media release leading up to the ride’s debut. Once it reaches the top, it tilts forward 30 degrees facing toward the ground, then drops nearly 400 feet at speeds of more than 75 mph, the release stated.

Stine said that the FDACS inspected the Orlando Free Fall before it opened late last year and that no safety issues or concerns were identified.

An FDACS spokesperson said that the initial permit inspection was conducted Dec. 20 and that “no deficiencies were noted.” An FDACS report shows the ride passed that inspection. The spokesperson said such rides are subject to semiannual inspections, but because the Orlando Free Fall has not been open for six months, no further FDACS inspections had been conducted on it.

The ride will not reopen until the FDACS completes its investigation into the incident.