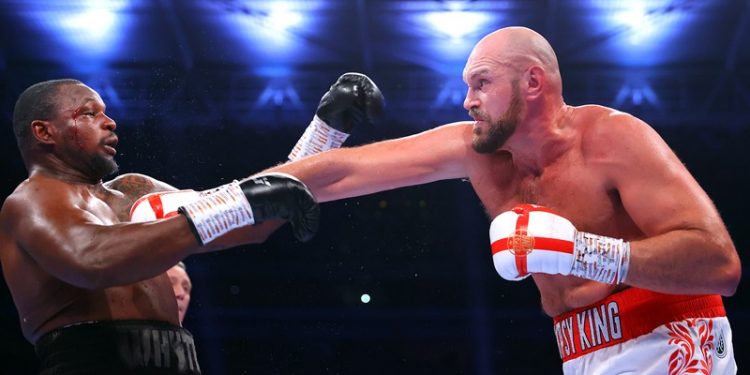 
If Tyson Fury truly plans to end his boxing career, he ended it on a high note. And we aren’t referring to Fury’s singing voice.

In front of 94,000 fans at Wembley Stadium in London and millions more worldwide, Fury dropped Dillian Whyte to the canvas with a textbook uppercut, followed by a push-off punctuating the punch. Whyte hit the canvas hard, then struggled to his feet. Referee Mark Lyson wisely called off the fight at 2:59 of the round. Fury (32-0-1, 23 KOs) retains his WBC World Heavyweight title and Ring Magazine title. Whyte falls to 28-3, 19 KOs).

“I’m overwhelmed with the support,” said Fury. “I can’t believe that my 94,000 countrymen and women have come here tonight to see my perform. I just want to say from the bottom of my heart, thank you so much to every single person who bought a ticket here tonight or stayed up late to watch it on TV.”

It wasn’t exactly a nail-biter, but that’s not what the fans came for. The six rounds of action leading to the outcome were a well-scripted outcome from “Sweet Caroline” to Fury ending the fight with an “American Pie” serenade, and no one save Whyte, his team, and his fans cared. Fury dominated the bout in every way that can be measured. He controlled the distance, the pace, and the range. He landed 76 of 253 punches thrown (31%) to 29 of 171 for Whyte (17%).

Throughout the fight, Whyte couldn’t get past Fury’s jab or his effective pressure. Whyte landed a handful of hooks, but their sting wasn’t more than a mosquito to Fury. They only served to annoy him. Dillian Whyte could not find a way to get through Tyson Fury’s offense. Photo: Mikey Williams/Top Rank Inc via Getty Images

Whyte’s conditioning and lack of balance betrayed him. By the fifth round, Whyte’s hopes were circling the drain. Fury seized the opportunity, landing body shots and hooks behind his busy jab. Whyte had no answers. Fury continued coming at the fading Whyte and delivered the dramatic ending. On Shakespeare’s birthday, Will would have been proud.

“As a professional, it was an uppercut. I think Lennox Lewis could even be proud of the right uppercut tonight,” said Fury. Fury credited his trainer Sugarhill Steward, “who made me the great fighter I am. Sugar, what a legend you are mate. The best trainer in the heavyweight division by a mile.”

“You let me mold you and make you the hardest puncher in heavyweight boxing,” replied Steward. Tyson Fury praised Dillian Whyte for being willing to get in the ring with him. Photo: Mikey Williams/Top Rank Inc via Getty Images

Fury had kind words for his opponent and longtime friend Whyte. “Dillan Whyte is a warrior. And I believe that Dillian will be a world champion. But tonight, he met a great in the sport. I’m one of the greatest heavyweights of all time. And unfortunately for Dillian Whyte, he had to face me here tonight. There’s no disgrace. He’s a tough, game man. He’s as strong as a bull. He’s got the heart of a lion. But you’re not messing with a mediocre heavyweight. You’re messing with the best man on the planet. And you saw that tonight with what happened.”

The storyline yet to be written is whether Fury will hold true to his word to retire. Multiple members of the boxing media asked the question without getting a direct answer. Fury vs. Whyte drew a crowd of 94,000 to Wembley Stadium, the largest crowd for boxing since Chavez Sr. and Haugen in Mexico City. Photo: ESPN

“I promised my lovely wife Paris of 14 years that after the Wilder 3 fight, that would be it. And I meant it. We had a war. It was a great trilogy. And I meant that,” said Fury.

“But I got offered to fight at Wembley at home, and I believe that I deserved — that I owed it to the fans, I owed it to every person in the United Kingdom to come here and fight at Wembley. Now it’s all done. And I have to be a man of my word. And I think this is it. This might be the final curtain for the Gypsy King. And what a way to go out! A big thank you to the United Kingdom. What better does it get than this? 94,000 people in my own country’s capital city. Broke all records in boxing in modern-day history,” crowed Fury.

Fury’s future yet to be written Tyson Fury insists Saturday’s bout is his swan song. Does anyone believe him? Photo: ESPN

But come on. This is Tyson Fury.

“Before we go, I want to bring in Francis Ngannou, UFC Heavyweight champion, I want to find out who is the baddest motherfucker on the planet.” Pressed for details, Fury said, “This is going to be a very special fight, never before seen in the history of our sport. It’s going to be an explosive fight when it happens.”

When what happens, exactly? Ngannou spoke up and said, “A hybrid fight with MMA gloves.” Is there anyone better at keeping the spotlight on himself even as he plans to party the night away and take a Greek cruise with his wife?

In November 2016, Manny Pacquiao vowed to boxing media after his win over Jesse Vargas he would retire, saying he’d promised his family he would do so.  Pacquiao went on to fight five more times before retiring in 2021 to run for president of the Philippines. We didn’t buy it from PacMan then, and we aren’t buying it from the Gypsy King either.

All PS3 Launch Titles – Every PlayStation 3 Game At Launch

All PS3 Launch Titles - Every PlayStation 3 Game At Launch