Tyson Fury vs Dillian Whyte: A personal rivalry that will play out in front of the world 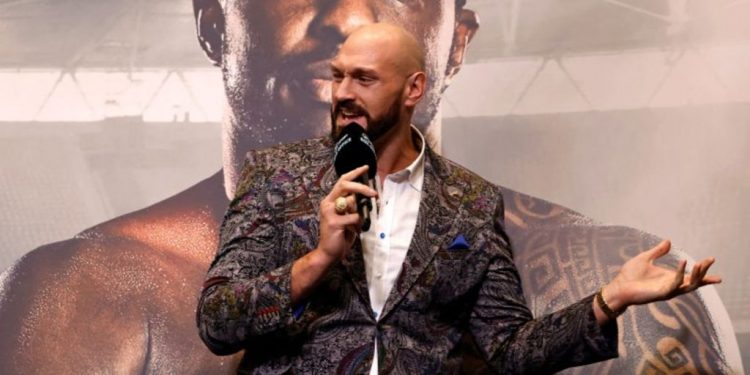 It will finally be Tyson Fury and Dillian Whyte on Saturday night at Wembley Stadium in a very personal fight under the eyes of a global audience.

Fans will travel to London In hope, hate and belief to sit under the glowing bar that fills the gap between ring and sky at the stadium; they will be lucky witnesses to a night of history.

At some point close to 11pm, the night will be lit by 94,000 fanatics holding up their phones to create our unique boxing milky way of sparkles; then the flames will come. Everybody will feel the heat, trust me.

In the tunnels at Wembley Stadium, the first of the two fighters will have left his safe dressing room and will be shuffling to the point of entry and also the point of no return; the other fighter will be in one last prayer huddle. Whyte will wait, Fury will pray.

There will be bedlam and howling as the music plays and the moment of contact moves ever closer. At last, the wait will nearly be over and the words will have long dried up in the mouths of all interested parties. Too much has been said. It will just be Fury and Whyte and 50-metres of distance to cover in the most important walk of their life.

Whyte will be under a giant hood; Fury has a musical trick to add to the beguiling romance of a giant outdoor fight. There is something magical planned. It will be Hollywood in the ugly London suburb.

The fight was on and off, bad blood has dominated, the bookies have panicked, the threats, glares and promises will be long, long gone. The old and ugly story about the alleged mob boss, Daniel Kinahan, was told again, but even that tricky tale could not stop the fight. The chronicles of doom were written; there have been predictions of a massacre and criticisms of both boxers, trainers, promoters, broadcasters, lawyers and candlestick makers. It will mean zero when the pair start to walk under a swelling boom of hope and noise from the lucky in the seats. Nobody, by the way, will actually be in their seats. Down the road in Harlesden, they will marvel at the noise of the distant thunder.

At that moment, the slow final seconds just before entering the stadium, nothing from this week or beyond will matter; at its very core, fights like this are simple affairs. The best man will leave with the glory. The belts and a place in history and the money will not change what happens once the first bell sounds and the two old friends start to fight. It will be simple; the same rules and gloves and rounds two fighters share at venues every night. The winner in this exceptional heavyweight carnival is the last man standing.

This fight has been a long time on the negotiating table. It was sanctioned, there were deals done and then broken; there were four attempts to find a suitable date for a purse bid to be completed. It was bad, truly angry and it was completed with just minutes left on the clock of the final deadline; this fight is a bloody miracle.

Actually, there are more miracles attached to this fight. Fury was lost to boxing, ten-stone overweight, drinking and using drugs and gone from the game. He returned, he made impossible dreams happen and now he is the world champion. He is an inspiration.

Whyte was shot and stabbed and kidnapped and seemed destined for a life in prison or a short sermon at his teenage funeral. He refused the orders of a life of mortal danger and found boxing. He is a win away from heavyweight boxing’s most amazing tale.

This is not an ordinary heavyweight championship of the world. It’s far from ordinary.

Fury won the world title in front of 50,000 in 2015 in Dusseldorf. He was the underdog but he beat the legendary Wladimir Klitschko. It was a truly great night for British boxing and then Fury fell deep into a dark, dark place. He lost his three belts outside of the ropes and was gone for nearly three years.

He then had three unforgettable fights with Deontay Wilder in the USA; the first in Los Angeles was a draw, the second two in Las Vegas were savage brawls; Fury stopped Wilder twice. He is the dominant heavyweight, the Gypsy King.

Meanwhile, for over 1,000 nights in this epic heavyweight story, Whyte was the leading and overlooked number one challenger. He waited, he was ignored and now he has his chance.

About a dozen years ago, they sparred and lived together in adjoining caravans; two men with wild heavyweight dreams. That friendship is gone, long gone. They have not met face-to-face since 2012. This week, hopefully, that will change at the planned publicity events.

The raw facts, which I believe are incidental trivia in this fight, are simple: Fury is unbeaten in 32, he is taller and should be heavier. He is 33. Whyte has lost twice in 30 fights, he has never had it easy and he is just 34. Those numbers will never explain what happens once the first bell tolls on Saturday night.

They can both be hurt and dropped. They have both been hurt and dropped in their two recent fights – they have also inflicted multiple knockdowns on their opponents in their last two fights. However, don’t just think this is a “don’t-blink” fight. It’s far more than that; they each have good and wise men buried in their corners.

The talking, as they say, is nearly over. The first bell is closer than it has ever been. It’s now just the fight; the deals and arguments are over. Fury and Whyte will deliver in a very personal and emotional battle in front of a very happy public. It is exactly what a big fight should be. And this is the biggest of big fights. Enjoy it.

Matt Reeves confirms ‘The Batman’ Easter egg about The Riddler

Final Fantasy 14’s housing lottery system is broken, but a fix is coming

Final Fantasy 14's housing lottery system is broken, but a fix is coming