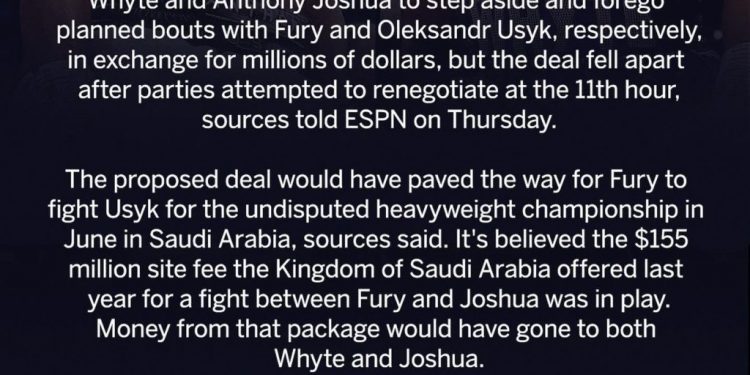 
The roller coaster ride called Tyson Fury vs. Dillian Whyte has finally come to an end as the purse bid was held earlier today, resulting in Frank Warren bidding forty-one million dollars and securing the rights to the fight.

This past Sunday, rumors were circulating that a step aside offer would be offered to Anthony Joshua in the neighborhood of twenty million dollars. Part of the step aside deal would have included Dillian Whyte, who has been the WBC mandatory for quite some time. It seemed like at the eleventh hour, that deal fell apart as the rumors again circulated those terms couldn’t be agreed to.

With the WBC holding their purse bid this afternoon, the fight between Fury and Whyte was now at the forefront. Matchroom offered, but it came second to Frank Warren’s Queensberry Promotions. Mike Coppinger of ESPN recently tweeted that April 23 is the target date for this fight in the U.K.

Here is the release from Queensberry Promotions.

This Friday, the purse bid to promote the fight between the World Boxing Council heavyweight champion Tyson Fury, and interim champion Dillian Whyte, was held virtually.

Dillian Whyte (28-2-0, 19 Ko’s) will come to this fight after defeating Russian Alexander Povetkin via a rematch in March of last year.

The World Boxing Council implemented an innovation some years ago by having 10% of the amount as a bonus to the winner of the fight, thus giving great additional incentive interest. In this case, the winner will receive a bonus of US$ 4,102,500.00! Queensberry Promotions will release more details on the highly anticipated match between Fury and Whyte soon.

Only Fools and Horses crowned best BBC show ever made