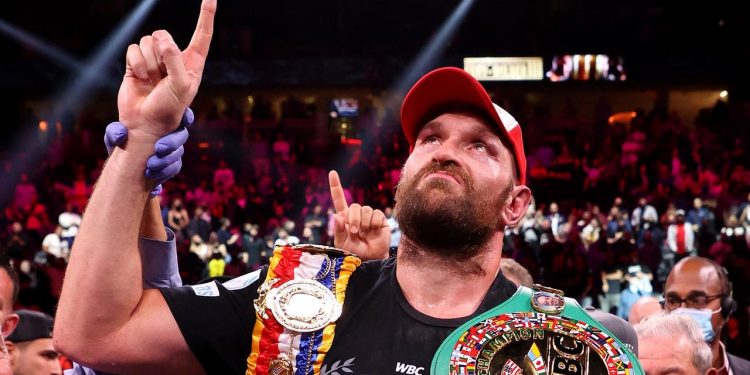 
World heavyweight champion Tyson Fury has made a bold retirement claim while accusing Dillian Whyte of “showing the white flag”.

It came after the challenger failed to attend a press conference on Wednesday ahead of their April 23 WBC title bout at Wembley Stadium.

Speaking at the press conference, Fury declared the fight against Whyte would be his last, telling media: “This is the final fight of my career, I’m retiring after this”.

It was expected that, should he win, Fury would then face the winner of Anthony Joshua’s rematch with Oleksandr Usyk.

There was no way of knowing what Whyte thought of that or anything Fury said after being a no-show for the press conference.

Whyte, the mandatory challenger for the unbeaten Fury’s World Boxing Council (WBC) title, is preparing for the fight in Portugal and, according to Warren, rejected the offer of a private jet to fly to London for Tuesday’s event at Wembley.

Fury, 33, said: “Before I was like ‘You know what, when I say stuff about Dillian Whyte he always fires back and he gets upset and causes a bit of a ruckus’ — now it’s like ‘Say what you want about the guy’.

“It’s given me that much more confidence, it’s unbelievable. He’s definitely shown the white flag in my estimation.

“He doesn’t want to go face to face with me because he’ll see that fire in my eyes and he’ll think ‘I’m getting smashed to bits’.”

Whyte is entitled to just 20 percent of the fee and there were reports the 33-year-old was seeking a renegotiated agreement before signing his contract.

Fury, however, said Whyte was in line for “the biggest payday of his life”.

Warren said Whyte was getting paid more than his contemporaries did when they first fought for a world title.

“I’ve never heard of a fighter not showing up to a press conference,” he said.

“Champions bank on themselves to win, that’s what they do to become the king — you win the title, you get the money.

“It’s just not right. We are where we are but Dillian Whyte is in Portugal, he should be here. It’s disgraceful that he’s not here, it’s not professional.”

While Whyte, 33, has won 28 of his 30 contests, Fury remains unbeaten as a professional, with 31 victories and one draw from his 32 fights and he believes he is a cut above his next opponent.

“There’s levels to this game.

“I’m not saying Dillian Whyte’s not capable of winning a fight because he’s won nearly 30 fights but there’s a gulf in class here. If I’m daft enough to get knocked out by him then I don’t deserve to be world heavyweight champion.”

Paralympic team from Ukraine to arrive in Beijing, officials to decide if Russians can compete