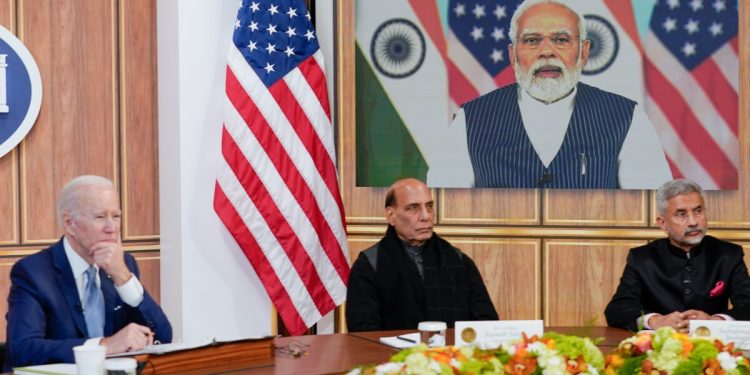 President Biden and his top Cabinet members spent much of Monday lobbying their Indian counterparts in a so-far-unsuccessful bid to persuade the world’s largest democracy to join the U.S.-led movement to support Ukraine against Russia’s military onslaught.

In a virtual meeting with India’s Prime Minister Narendra Modi, Biden praised relations between Washington and New Delhi that have improved significantly in recent years. Modi responded that the two countries are “natural allies.”

But they are not allied in the current crisis consuming the energies of much of the Western world.

India has abstained on several votes in the United Nations to condemn Russia for its brutal invasion of Ukraine, where thousands of civilians may have been killed in Russian attacks and some 4.5 million have been forced to flee the country. The Biden administration says it believes President Vladimir Putin’s forces are committing war crimes.

“It’s a tough spot for the Indians … between a rock and a hard place,” said Vikram Singh, an Asia expert at the U.S. Institute for Peace, a Washington think tank.

India is wholly reliant on Russia for its weapons, a decades-long relationship that dates to a 1971 war in which India was backed by Russia and Pakistan was backed by the U.S. India also depends on the behemoth nation to its north for fertilizer and other agricultural products to feed its 1.4 billion people.

“Indians are just as horrified as anyone, but India is a poor country,” Singh said. “Taking the risk of burning relations with Russia has no real upside.”

A senior Biden administration official who briefed reporters after the talks with Modi said the two leaders had a “candid exchange of views” on the war in Ukraine, but that there was “no concrete ask, no concrete response.”

The official, speaking without attribution in keeping with White House protocol, said they also discussed possible ways to mitigate the effect that sanctions against Russia might have on food security in India and ways to diversify India’s economy to make it less dependent on trade with Russia. Biden urged Modi not to increase imports of Russian gas and oil, the official said.

Weaning India off of Russian weaponry would take years and be very costly, experts say. One alternative might be to ramp up domestic Indian production of armament and critical parts for fighter jets and helicopters.

Despite its longstanding ties with Moscow, India in recent years has developed an increasingly friendly relationship with Washington. Under former President Trump, the two countries brokered trade deals, and India began to enjoy new prominence in U.S. foreign policy when Trump and then Biden revived a grouping that also includes Australia and Japan, known as the Quad, or Quadrilateral Security Dialogue. The Quad is seen as an important bulwark against China’s aggressive efforts to dominate the Indo-Pacific region.

India’s antagonistic confrontation with China underpins its position on the Russia-Ukraine war.

China has openly backed Russia in the war, with Putin and Chinese President Xi Jinping declaring a “limitless” bond in February at the inaugural ceremony for the Winter Olympics in Beijing. Some Indian diplomats fear that if New Delhi were to antagonize Moscow now, it would push Russia closer to China, leaving India exposed.

India and China fought deadly skirmishes along their shared and disputed Himalayan border as recently as 2020, and India suspects the much larger China to be behind hackings into its electrical grid and similar subversive actions.

Man with 200 tattoos says people ‘villainize’ him over ink

Man with 200 tattoos says people 'villainize' him over ink