U.S. orders evacuation of most embassy personnel in Ukraine 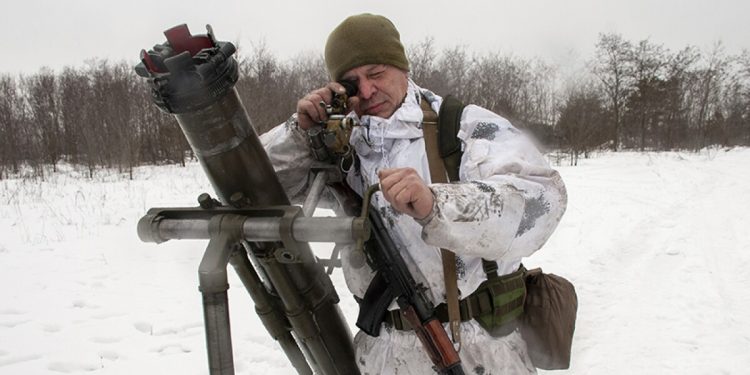 The U.S. government on Saturday ordered the evacuation of most of its embassy personnel and all American citizens from Ukraine as President Biden spoke by phone with Russian leader Vladimir Putin amid dire signs that a Russian invasion could be imminent.

“It is increasingly likely that this is where this current situation is headed — towards some kind of active conflict,” a senior Biden administration official said. “It isn’t just time to leave Ukraine. It is past time for private citizens to leave Ukraine.”

“We unfortunately are seeing increasing signs that we’re heading toward those worst-case scenarios,” said the official in a background briefing with reporters. The official added that “we’re not going to be in a position in those worst-case scenarios to be organizing evacuation convoys for Americans. And that is again why we are reiterating to them that it is past time for them to leave.”

The ominous assessment of the situation in Ukraine and the U.S. evacuation order came a day after top U.S. officials warned that Russia had all the forces it needed to launch a major invasion and could, in short order, attack the former Soviet republic.

Diplomatic efforts by U.S. officials continued on Saturday in the hopes of averting a conflict. The White House said Biden held a hastily scheduled hour-long call with Putin that concluded at 9:06 a.m. Pacific. Russian officials had originally proposed that the pair speak on Monday, but the White House convinced Moscow to move up the talks.

It was the first time the two leaders had engaged in talks since late December. They spoke twice that month, first by videoconference and then by phone. Officials from both sides met last month in Geneva. In recent days, Putin has met with other European leaders, including French President Emmanuel Macron and Germany’s new chancellor, Olaf Scholz, as a host of NATO allies have tried to dissuade Putin from starting a war.

Secretary of State Antony J. Blinken spoke Saturday with his Russian counterpart, Foreign Minister Sergey Lavrov “to discuss acute and shared concerns that Russia may be considering launching further military aggression against Ukraine in the coming days,” the State Department said. “The Secretary made clear that a diplomatic path to resolving the crisis remained open.”

Defense Secretary Lloyd J. Austin III, meanwhile, held a call with Russian Minister of Defense Sergey Shoygu. Austin also ordered the withdrawal of the remaining U.S. forces in Ukraine, 160 members of the Florida National Guard who had been advising the country’s troops since November, the Pentagon said in a statement. The National Guard troops were removed in “an abundance of caution,” the Pentagon said, and will be redeployed elsewhere in Europe.

The State Department travel advisory on Saturday said most American staff at the Kyiv embassy have been told to leave the country. It also directed U.S. citizens to depart as soon as possible. The State Department has ordered the “departure of most U.S. direct hire employees from Embassy Kyiv due to the continued threat of Russian military action,” said the advisory, which was issued at 12:13 p.m. local time in Kyiv. “U.S. citizens should not travel to Ukraine, and those in Ukraine should depart immediately using commercial or other privately available transportation options.”

The administration official, speaking on condition of anonymity to discuss security matters, said the U.S. was “not closing the embassy, we are not suspending operations of the embassy within the country.”

“We are planning to maintain the core functions of our embassy as long as possible with a reduced number of people,” he said.

U.S. officials have in recent weeks been steadily ratcheting up their warnings about a potential Russian invasion, one that could be the largest in Europe since World War II. Sullivan on Friday would not comment on a news report that U.S. intelligence officials believe Putin has given Russian military officials the green light to invade, just that the decision was up to Putin, as it has been all along.

“We are ready either way,” Sullivan said, adding that Moscow’s buildup of more than 100,000 troops on Ukraine’s border with Russia had strengthened the NATO alliance, leaving it “more cohesive, more purposeful, more dynamic than in any time in recent memory.”

Blinken reiterated Sullivan’s warnings to reporters during a trip to Fiji where he was meeting with 18 leaders from the region as part of a diplomatic trip that has included meetings with his counterparts from Australia, Japan and India to find ways to counter China’s growing influence.

“We are continuing to see very troubling signs of Russian aggression,” Blinken told reporters, adding that an invasion could take place at any time.

U.S. officials had previously indicated that Putin might wait until the 2022 Winter Olympics concluded Feb. 20 before beginning a military assault to avoid angering China, which is hosting the Games.

Ukraine’s military reported on Friday that Russian-backed separatists had begun military drills involving artillery, tank and armored vehicles in the eastern part of the country that they control. The mobilization was the final piece in an almost total Russian-led chokehold of the country.

Aside from the separatists and units stationed in Transnistria, just over the border from the southern Ukrainian city of Odessa, Russian troops are massed on Ukraine’s eastern and northeastern frontiers, and on its 674-mile northern border with Belarus.

Russia has also assembled a formidable force in the Black Sea, bringing in six warships and a submarine, as part of naval drills there and in the Sea of Azov.

Putin had hoped that his steady buildup of forces on Ukraine’s borders would compel the North Atlantic Treaty Organization to give him a guarantee that Ukraine, a former Soviet republic, would never be granted NATO membership.

Putin, a former KGB official, has long been agitated by Ukraine’s independence from Russia and the prospect of its aligning itself more closely with the rest of Europe. His annexation of Crimea from Ukraine in 2014 drew global condemnation and economic sanctions from the West, but the punishment has not seemed to deter him from contemplating another invasion.

The U.S. and other NATO members are privately reluctant to admit Ukraine, which would make the organization responsible for guaranteeing its military defense. But thus far NATO leaders have held firm in their refusal to give Putin such a guarantee, even though it could avert an armed conflict, stating that the decision will be up to Ukraine and NATO members, not dictated by Moscow.

Throughout their talks with their Russian counterparts, Biden administration officials said that Putin’s avowed security concerns about his country’s much smaller neighbor and his demands from NATO are merely a pretext for an eventual invasion.

In Ukraine on Friday, residents of Odessa, the nation’s main gateway to the Black Sea, expressed little urgency despite the White House statements.

Though the city would probably be a primary target for any invasion, and the Russian army is across its border in nearby Transnistria, people roamed the streets, enjoying the late-morning sun and sipping lattes before ambling to the Odessa Food Market in the city center.

Wilber reported from Washington, Bulos from Kyiv and Wilkinson from Fiji.