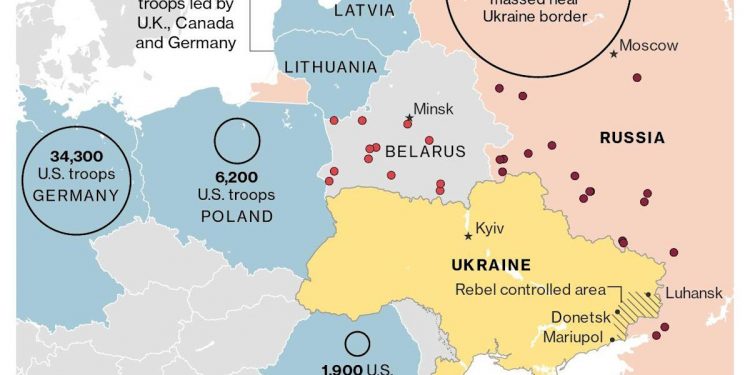 (Bloomberg) — Presidents Joe Biden and Vladimir Putin will speak Saturday as tensions soar over the Ukraine crisis, according to a U.S. official. The U.S. said intelligence indicates Russia may attack Ukraine before the Olympics end on Feb. 20. Russia has said it has no intention of invading.

Most Read from Bloomberg

Russia pushed back after NATO and the European Union said they’d only provide a collective response to its proposals on a regional security framework. Moscow had been seeking individual replies from each member nation of the EU.

Western allies are seeking to show unity in the face of Russia’s military buildup near the Ukraine border, bolstering NATO’s eastern flank with added troops and threatening joint sanctions against Moscow if it were to invade Ukraine.Biden said conditions in the region could “go crazy quickly” as he urged Americans to leave Ukraine, and he held a call Friday with other leaders to discuss the tensions.

The U.S. and Russian leaders will speak on Saturday, according to officials from both countries. Biden may do the call from the presidential retreat at Camp David, Maryland, where he departed the White House for on Friday afternoon.

The call will take place Saturday morning, according to a U.S. official. It will be the first direct conversation between the two leaders since Dec. 30.

The European Union is “not evacuating” Ukraine, said spokesman Peter Stano. “For the time being, the non-essential staff has been given the opportunity to telework from outside the country,” he added.

Some EU member states, such as the Netherlands, have advised their citizens to leave but also said they’re not evacuating diplomats. Greece has advised its citizens in Ukraine to contact the Greek Embassy, but it isn’t advising at the moment to leave the country, according to an EU diplomat.

The U.K. Foreign Office said that it “now advises against all travel to Ukraine. British nationals in Ukraine should leave now while commercial means are still available.” South Korea issued a ban on travel to Ukraine and an advisory that citizens should depart. Israel is evacuating the families of its diplomats from Kyiv, Israeli reporter Barak Ravid said in a tweet.

Biden told NBC News in an interview excerpt that aired Thursday that “American citizens should leave now” because “things could go crazy quickly.”

The Pentagon is sending 3,000 more troops from the U.S. to Poland, according to a U.S. defense official, as part of the effort to bolster the American and NATO presence in Europe as tensions with Russia build over Ukraine. U.S. officials have said the troops are there for defensive purposes only and wouldn’t go into Ukraine.

The Defense Department also said that General Mark Milley, chairman of the Joint Chiefs, spoke by phone with his Russian counterpart, General Valery Gerasimov. They agreed to keep the discussion private as has been past practice, according to Colonel Dave Butler, spokesman for the Joint Chiefs.

Brent oil soared to $95 a barrel for the first time since 2014 as the tensions with Russia over its military buildup near Ukraine intensified concern about tight global supplies.

The global benchmark jumped as much as 4.7%, while U.S. prices also climbed. Any Russian move against Ukraine could not only disrupt crude supplies but also could spark retaliatory sanctions by the U.S.

“We continue to see signs of Russian escalation, including new forces arriving at the Ukrainian border,” Sullivan told reporters at the White House. “I will not comment on the details of our intelligence information, but I do want to be clear, it could begin during the Olympics despite a lot of speculation that it will only happen after the Olympics.”

The actions by Russia could include causing a provocation in the Donbas region, where Ukraine’s military has been fighting for years against separatists backed by Moscow, or attacking the country’s capital, Kyiv, officials familiar with the matter said. They said any action could start as soon as Tuesday.

He said Americans in Ukraine should leave “as soon as possible and in any event in the next 24 to 48 hours.”

The talks with Shoigu were constructive and frank, Wallace said. “He is a professional, he is a very experienced minister, as is General Gerasimov. And when they say to me they are not going to invade Ukraine we will take that seriously. But as I have also said, we will look at the actions that accompany it.”

Ukraine’s grain shippers echoed assurances from the economy ministry that Russian naval drills shouldn’t block access to the nation’s ports, but warned that the uncertainty risks deterring some vessel owners.

Moscow will begin full-scale naval exercises in the Black Sea on Sunday, after announcing the start of drills on Thursday. That unnerved commodity markets as Ukraine is the world’s No. 2 grain shipper.

The drills, to take place in blocks of international waters as well as those claimed since 2014 by Russia along the coast of Crimea, should leave space for ships to reach ports such as Odessa and Chornomorsk via the 12 mile (19.3-kilometer) territorial waters of Romania and Ukraine. But the exercises have further fueled market fears that Russia’s military buildup could yet spiral into a conflict, said Mykola Horbachov, president of Ukraine’s Grain Association.

Russia said it won’t accept the collective response of NATO and the European Union to its proposals on European security.

The demand for the respect of the principle of “indivisible security” in Europe was made in a letter sent by Foreign Minister Sergei Lavrov to his counterparts in 37 countries in Europe and North America, the Foreign Ministry said in a website statement.

Instead of individual answers, Russia has received letters from NATO chief Jens Stoltenberg and the EU’s foreign policy chief, said the ministry, which added that it is “waiting for a detailed response to the question we posed from every addressee.”

“There’s a risk for a full-fledged invasion, but there’s also a risk for other types of aggressive actions, including attempts to topple the government in Kyiv, hybrid cyberattacks, and many other types of Russian aggression,” Stoltenberg told reporters in Romania at an air base near the Black Sea.

U.S. Secretary of State Antony Blinken said the world’s response to the Ukraine crisis was being watched by “others,” in a pointed reference to China’s territorial claims in Asia.

Blinken said countries shouldn’t change the borders of other nations by force or dictate to another government. If these actions are allowed it affects basic principles established after two World Wars and the Cold War, he added in remarks to reporters after meeting with Quad foreign ministers in Melbourne.

The lower house of Russia’s parliament will start talks on a proposal to formally recognize separatist authorities in Ukraine’s Donbas, a move that, if approved, could hamper peace efforts and fuel tensions.

Speaker Vyacheslav Volodin said the State Duma’s council will decide Monday how to proceed with a proposal made in January to vote on an appeal to President Vladimir Putin to recognize the so-called People’s Republics in Donetsk and Luhansk.

Russia has supported the breakaway quasi-states militarily and financially since their formation in 2014, though officially it denies that and backs a peace plan that calls for their reintegration into Ukraine. Recognition could complicate efforts to implement that pact and potentially pave the way for Moscow to openly supply more weapons to the republics, something the ruling party has already proposed. The timeline for any possible moves toward recognition remains unclear.

Most Read from Bloomberg Businessweek

“I Never Thought I’d Leave Teaching, But Here I Am”

"I Never Thought I'd Leave Teaching, But Here I Am"