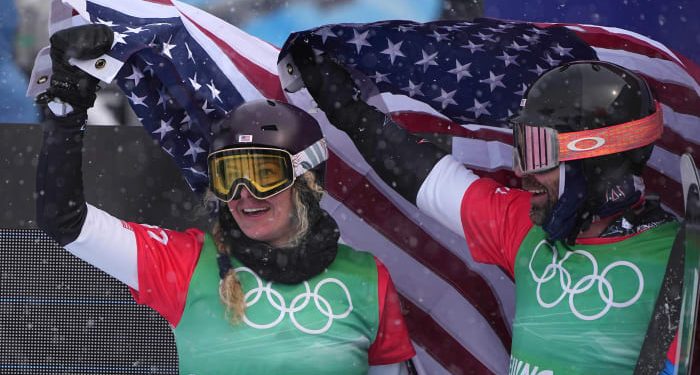 
ZHANGJIAKOU, China — Snowboard cross is different from most Winter Olympic events in that athletes actually race alongside each other simultaneously. They don’t perform and then wait to see how the next person does, like in figure skating or Alpine skiing. Saturday morning’s mixed-team event put a different spin on it: Two stories jostled for position, each hellbent on finishing first.

Was it the aging snowboarders who finally found gold near the end of their careers? Or the retired one who accused their coach of predatory behavior?

Nick Baumgartner and Lindsey Jacobellis would like you to focus on them. Baumgartner is 40. Just a few days ago, he lamented a “little mistake” that cost him yet another chance at an individual medal. It looked like he would never win one. Jacobellis is 36; she had famously blown her chance at gold in 2006 and had not medaled since. Then Jacobellis won gold this week, and then Saturday she and Baumgartner won gold together. You don’t have to know what a “hole shot” is to see how awesome this was. You just need to know how it feels to chase a dream.

Callan Chythlook-Sifsof wants you to think about their coach. His name is Peter Foley. In since-deleted Instagram posts this week, according to various media reports, Chythlook-Sifsof accused Foley of taking naked photos of female athletes and making inappropriate comments. Chythlook-Sifsof is a retired snowboarder. She said she couldn’t stand to watch the Olympics knowing Foley was coaching.

These should be separate stories. But the timing made that impossible. U.S. Ski and Snowboarding is reviewing the allegations, and Jacobellis said Foley was not able to do his usual video review in the athletes’ village with them this week.

“It’s definitely been super upsetting to have that when we’re trying to focus, and it definitely breaks up our team energy a little bit,” Jacobellis said. “But of my 20 years on the team, I can speak very highly of his character. He’s always supported me through everything that I’ve gone through. And he helped me find an amazing mental health coach to help prep me, especially for this moment here today.”

Baumgartner was even more spirited in his defense of his coach:

“Peter Foley, we’ve grown so much together, we’ve had so many years together, it’s been awesome to see him grow as a person and a coach, and to have him help me grow as an athlete. And I can’t speak any higher about that man. He’s done so much for us. All the coolest moments of my life have been right alongside that gentleman. And I love that guy like a father. And it’s been a pleasure and an honor working with him.”

Chythlook-Sifsof’s allegations are serious, and she deserves to be heard by somebody who is impartial. That is obviously neither Jacobellis nor Baumgartner.

But Jacobellis and Baumgartner were understandably annoyed at the timing, too. They each spent decades working to win medals, and while neither could anticipate doing it in the mixed-team event (which is new,) a gold medal is still an amazing achievement.

Baumgartner is 40, a resident of Marquette in the Upper Peninsula of Michigan who does construction work in the summer to fund his athletic career. He spent an hour or two after the race telling and selling his story to everybody in sight, and why wouldn’t he? This was his chance to capitalize on his accomplishment. A week from now, most people won’t ask.

Jacobellis is suddenly a gold-winning machine. This week, she forever changed the way people perceive her—and maybe even on some level, the way she perceives herself.

Their achievement—and their words of support—have no bearing on whether Chythlook-Sifsof’s allegations are true. Thankfully, the allegations also did not keep Jacobellis and Baumgartner from accomplishing what they did.