Uber delivered investors its first profitable quarter on an adjusted basis, thanks to a rapidly recovering rideshare business and the popularity of food delivery.

However, volatile activity in Uber’s investment portfolio caused it to swing to a $2.4bn net loss, based on formal accounting principles, thanks to a $3.2bn negative revaluation of its stake in China’s Didi Chuxing.

On that basis, it eked out a $8m profit in this year’s third quarter, up $625m on the same period last year.

Wall Street had been told to expect the ebitda milestone, and on Thursday Uber reiterated its confidence in sustaining that level, predicting adjusted ebitda profits of $25m to $75m in the final quarter of the year.

That outlook fell below the $110m target analysts had expected, according to S&P Capital IQ, and Uber shares fell marginally in after-hours trading.

Using the same metric, Uber said its restaurant delivery business was for the first time turning a profit, while its border delivery segment, which includes groceries, was nearing break-even by the same measure.

Uber managed to surpass analysts’ expectations in all three of its business units — rideshare, delivery and freight — to post overall revenue of $4.85bn for the quarter.

That was up 72 per cent on the same period last year, and better than the $4.41bn analysts had expected, according to S&P Capital IQ.

Gross bookings — the total value of all transactions, including delivery — were at an all-time high, the company said, at $23.1bn. The trend suggested the opening up of societies was not leading to a drop in delivery demand. 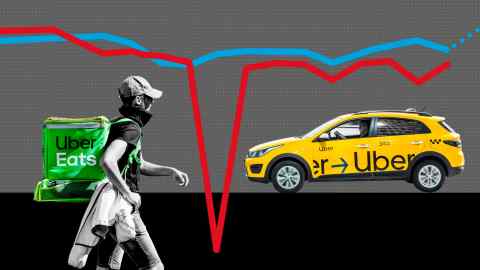 Dara Khosrowshahi, chief executive, said the company had seen driver supply “steadily returning” thanks to “decisive investments” in getting workers back on the platform during a period of nationwide labour shortages.

The company said in the US demand recovery was, for the first time this year, now in-step with supply recovery — with 65 per cent more drivers working for Uber than in January.

As a result, surge pricing had approached “2019 normalcy”.

Uber also reported a significant recovery in trips to and from airports, growing 20 per cent from the beginning of September. Business trips on the platform were up 60 per cent.

Best Camping Towels for All Your Outdoor Adventures