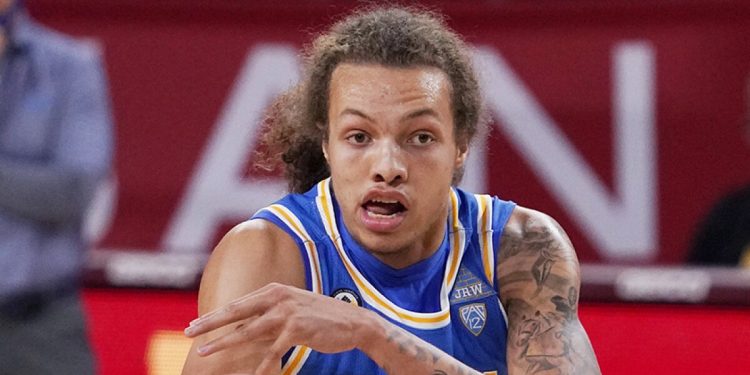 Arizona students had been relentless in their hostility. Each time UCLA players on their way to and from the locker room passed beneath the cluster of seats that housed the student section known as the ZonaZoo on Thursday night, boos and insults showered over the Bruins.

The antagonism inside Tucson’s McKale Center intensified when UCLA players shot free throws, students chanting “F— you, Tyger!” at point guard Tyger Campbell and “F— you, Johnny!” at Johnny Juzang. The students were particularly aggressive in their animosity toward Campbell after he got tangled up with Arizona’s Pelle Larsson, earning each player a technical foul.

Inside this cauldron of obscene, extreme hostility tensions bubbled over after the third-ranked Bruins’ 76-66 loss to the seventh-ranked Wildcats.

As the Bruins walked off the court toward the tunnel to their locker room, nearby students jeered and pointed, one flashing a thumbs-down. Video released after the game showed UCLA redshirt freshman forward Mac Etienne, wearing a white T-shirt and pants rather than game togs because he has been sidelined by a season-ending knee injury, making two spitting motions at the students.

Etienne was immediately ushered away by Chris Carlson, a UCLA associate athletic director. A police officer who witnessed the incident can be seen on the video speaking into his walkie-talkie.

Police told reporters they cited Etienne on suspicion of assault, though he was not detained and was allowed to travel with the team to Phoenix as it began its preparations to play Arizona State on Saturday at Desert Financial Arena.

It was not immediately clear what legal repercussions Etienne might face or if he would need to return to Arizona for a court date.

A UCLA athletic department spokesman released a statement after the game saying the school was committed to the “highest level of sportsmanship” and would review the matter.

Etienne has traveled with the team even though a torn knee ligament in October has prevented him from playing. A four-star prospect from New York, Etienne spent two seasons at Suffield (Conn.) Academy, becoming the Gatorade state player of the year, before transferring to Brewster Academy in Wolfeboro, N.H.

When Etienne’s final prep season was curtailed by the pandemic, he enrolled at UCLA in time for the winter quarter during the 2020-21 season. He played in 13 games with the Bruins, making one start, and averaged 2.6 points and 2.8 rebounds in 11.4 minutes per game.

Update: The Sun Devils (6-13 overall, 2-7 Pac-12) have lost four consecutive games but were competitive in three of those defeats, including a 58-53 loss to USC on Thursday. Arizona State held a lead until the final minute, when Trojans forward Isaiah Mobley made a basket to tie the score and guard Boogie Ellis added five free throws in the final 46 seconds.