UConn wins an ‘ugly’ one to reach yet another Sweet 16 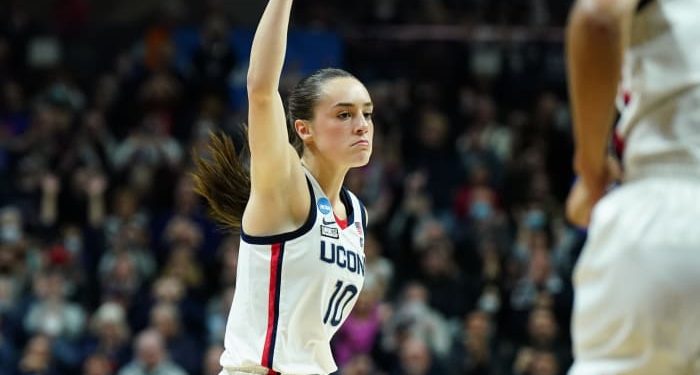 
It was chippy, it was tense and it certainly wasn’t pretty. But No. 2 UConn pushed past No. 7 Central Florida to land a place in the Sweet 16 on Monday, extending its own NCAA record for the program’s 28th consecutive appearance in the women’s tournament’s second weekend.

Monday’s second-round game was notably rough for the Huskies, however. They started the night slow and struggled with fundamentals throughout. (That included a 2-of-12 performance on layups.) When UConn finally managed to go up by double digits in the fourth quarter, UCF pulled right back, keeping the game close until its final seconds. In the end, UConn escaped with the win, 52–47, but they got just about all they could handle in the process. This was a physical, pace-setting Knights squad whose ability belied their seeding, and they offered something of a blueprint for wearing down these Huskies.

The game served as a reminder: Yes, UConn is back to full strength, or something close to it, after they went much of the season without reigning player of the year Paige Bueckers and spent additional time without star freshman Azzi Fudd. But a bill of clean health doesn’t mean the team has an automatic road to the Final Four. There’s still plenty to poke at here.

“We didn’t have our best game today, but I’m really proud of our team,” said senior guard Christyn Williams. “We grinded it out. It was very ugly, but we got the dub and that’s all that matters.”

It was a generally messy performance from UConn, with more than a few unforced errors, including the aforementioned layups. Two starters, Aaliyah Edwards and Olivia Nelson-Ododa, fouled out. But make no mistake: These weren’t all self-inflicted wounds. UCF did everything it could to push UConn here.

The Knights’ greatest asset is their ability to slow down and control the pace of play. Their games this year averaged 65 possessions per team per 40 minutes—one of the lowest rates in Division I. That style can give opponents fits. It allows UCF to work as a very, very effective defensive team, even without being super dominant on the boards. In fact, no team was better this season at limiting the scoring of its opposition, as the Knights allowed their opponents to average just 48 points per game. And if anyone had previously believed that statistic was tied more to the level of play in the American Athletic Conference—UCF showed they could be just as punishing against one of the top offenses in the country on Monday. This was just the second time all year that UConn had scored fewer than 55.

Ultimately, even with their struggles on offense, UConn was able to press through in large part because of its defense: The Huskies had 10 blocks and forced 20 turnovers. That came from matching the physical, suffocating play of the Knights, and then some.

“We knew it was going to be like that from the tip-off. It was going to be an aggressive game and a physical game,” said Williams, who finished with 12 points. “And we just fought back. That was the only thing we really could do, was just hold our own and fight back. And that’s exactly what happened, we just kept on throwing punches and eventually they backed down.”

(To be clear, no literal punches were thrown, though the atmosphere was tense enough that you could have been forgiven for thinking otherwise.)

In the Sweet 16, they will face the No. 3 Indiana Hoosiers, who had a similarly close call themselves on Monday in fending off an upset threat from No. 12 Princeton. And a major question for UConn is just what the team will be able to get from Bueckers: She played 32 minutes against UCF, the most time she had seen on the court since returning from knee surgery at the end of February. Yet it’s clear that she is still in the process of getting back to her old self. She finished with nine points, two assists and a steal, with several flashes of her characteristic excellence, particularly as it came to her court vision. “But there’s still a lot going on out on the court that you can see it’s not the same player that we saw all of last year,” Auriemma said.

This team is well-rounded enough that it does not need Bueckers to be at her best to win. But the less they have from Bueckers, the lower their margin is for error. That was obvious against UCF, and it will surely be so against Indiana, too.

It was hard to sum up the state of affairs better than Auriemma did in his opening statement on Monday: