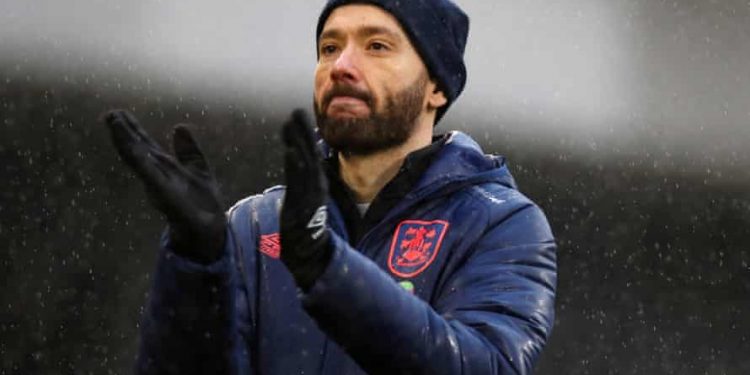 You probably haven’t heard of Marcel Ries, the Lausanne-based metalsmith who since 2009 has been tasked with engraving the winner’s name on to major Uefa trophies in the moments after the final whistle blows, while someone charges the glitter-cannons and the victors prepare to hoist their freshly personalised pot aloft. Perhaps it was to Ries that Uefa turned on Tuesday, to find out if he is as adept with the Tipp-Ex brush (ask your grandparents) as he is with an engraving pen, and as efficient at taking names off stuff as he is at indelibly adding them.

It is curious that Uefa, in contrast to the other major Swiss institution Guardian readers have been reading about this week, are so very keen on publicly putting names on everything. But though it insisted on Tuesday that “at present there are no plans to change the venue”, it might at this point be regretting the decision to emblazon the name of St Petersburg, the city whose Gazprom Arena the Gazprom-sponsored organisation for some reason chose to host the 2022 Big Cup final, on every single ball used in the competition this year.

Whatever its statements say, Uefa is universally predicted to eventually conclude that, as tousle-haired party organiser Boris Johnson put it a little earlier, “it is inconceivable that major international football tournaments can take place in Russia”. Such news will be particularly, and in numerous ways, deflating for these suddenly obsolete balls, who will have to take their thermal bonding, rhombus carcasses and high-grade butyl bladders to the nearest discount bin. Meanwhile it might be time to order a few official Road to Saint Petersburg 22 skips in which to dump the enormous quantity of suddenly obsolete stickers, signage and even bespoke tunnel carpets the continent’s leading clubs are about to have on their hands. Perhaps it is even time to accept that the need for bespoke tunnel carpets is not as great as it once appeared.

Later on Tuesday, eyes turn to Villarreal and Chelsea, hosts of the evening’s two last-16 games, to see quite how much of this signage has already been quietly cupboarded. Thomas Tuchel’s European champions host Lille, currently 11th in Ligue 1, with Romelu Lukaku the focus of particular attention after his anonymous performance in Saturday’s win over Crystal Palace, in which he touched the ball only seven times, one of those from kick-off. “It’s of course not what we want,” Tuchel said, “but it’s also not the time to laugh about him, make jokes about him.” Have no fear, Thomas – this is The Fiver, there’s absolutely no chance of that.

Join Scott Murray at 8pm (GMT) for hot Big Cup MBM coverage of Chelsea 2-0 Lille, while Barry Glendenning will be on hand for Villarreal 1-1 Juventus.

“In life our ego can kill us more than help us. Football challenges you every single day. Every time you are facing a challenge, you have the opportunity to grow and to add new knowledge. So I hope that today I will be a worse coach than I am tomorrow” – Carlos Corberán, high-flying Huddersfield’s boss, gets his chat on with Ben Fisher about working with Bielsa, perfectionism and more.

“Reading about Jack Wilshere’s move to Aarhus (yesterday’s Fiver) couldn’t help but remind me of my hometown club’s first ever foray into European competition this season (albeit last summer), when Larne defeated said Danish Superliga mid-table powerhouses over two legs to set up a clash with Paços Ferreira. Given the winner of that tie would play Spurs for a place in the group stages of Tin Pot, it’s now gutting to think that the worst performance of six games on our European journey stopped us from witnessing Spurs in all their Spurs-iness at close quarters. By the way, Aarhus were not happy at losing” – Bryce Brennan.

“While not letting the fact that it isn’t really that central get in the way, I have long thought that the Aarhus tourist board have missed a trick not bringing Madness in to sell the town. Maybe now Jack Wilshere has pitched up they could give it a whirl” – Alistair Moffat.

“Why is it that on the far side of the world, we are rightly showing compassion and sympathy for ‘our’ Meikayla Moore after her own-goal hat-trick (yesterday’s Quote of the Day), yet when I admit to my fellow Kiwis that I am a long-time and tormented Sunderland fan, they all crack up laughing? Chin up Meikayla, things could be a lot worse” – Matt McILraith.

“What’s the protocol in that situation? Did Moore have to find another ball from somewhere and present it to the referee?” – Michael Bland.

“Re: yesterday’s Fiver letters. Not only does it seem like years since we last heard from Mac Millings, but if one of the wittier Fiver contributors in history (a small field, I admit) is reduced to mere punctuation pedantry then we really are all going to hell in a handcart. It’s not like it was in my day, etc” – Richard O’Hagan.

Send your letters to the.boss@theguardian.com. And you can always tweet The Fiver via @guardian_sport. Today’s winner of our prizeless letter o’ the day is … Matt McILraith.

Members of the USWNT have reached a landmark agreement with their governing body to end a six-year legal battle over equal pay, securing a deal promising them $24m plus bonuses that match those of the men.

Tadcaster Albion are facing a lengthy break from home action after their ground suffered severe damage in the latest storm to hit the Yorkshire town.

Sergio Agüero will be off to the Human Rights World Cup after all, joining the Argentina backroom team in Qatar. “I’ll be there with the team, I get along very well with them,” he cheered. “I want to be close to them and try to have fun.”

Jürgen Klopp insists nothing has changed for Liverpool’s title hopes despite Manchester City’s late slip-up against Spurs. “The truth is, I was on the way home when it was 2-1 to Tottenham and then I arrived at home and didn’t follow it anymore because I was sure they would equalise,” he tooted. “Then we went out and the driver was very excited and told me that it was 2-2 and then 3-2, I thought City won but it was Tottenham, so ‘Oh’ was my reaction.”

St Mirren have brought in Stephen Robinson from Morecambe as their new boss.

And Matt Etherington will take charge of Peterborough at Fulham on Wednesday after manager Little Lord Ferg did one.

Ben McAleer previews and predicts what will happen in Big Cup this week.

Ryan Baldi charts the journey of Ryan Gauld – once dubbed the Scottish Messi – to success in MLS with Vancouver Whitecaps.

Sid Lowe on an emotional and emphatic Basque derby win for Athletic Bilbao.

TO THE ABBEY STADIUM!

The Wendy Williams Show CANCELED, Sherri Shepherd to Host Her Very Own Program