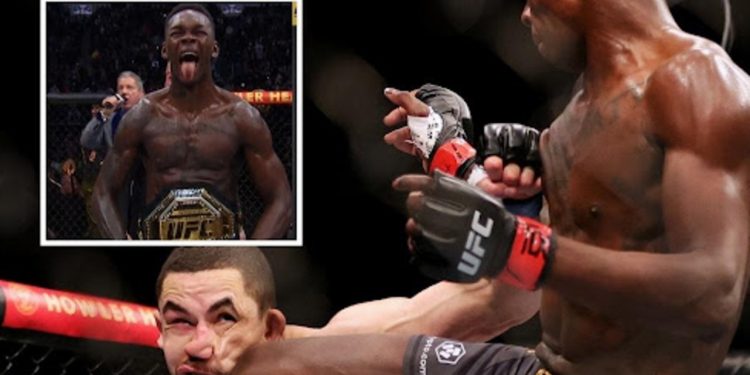 Australian Robert Whittaker was visibly disappointed after his loss to Israel Adesanya, declaring the UFC judges got it wrong.

Israel Adesanya has defended his UFC middleweight title against Australian Robert Whittaker in their long-anticipated rematch at UFC 271.

The fight went the distance but the Kiwi won via unanimous decision (48-47, 48-47, 49-46), despite Whittaker producing a much better performance than in their first fight, where Adesanya knocked him out early.

Desperate to avoid that same fate, Whittaker was far more cautious this time around, using the first round to size up his opponent.

He attempted some takedowns but his only effective one came in the fifth round. Each time Whittaker had Adesanya on the canvas he struggled to keep him there, as the champ escaped his clutches with relative ease.

Adesanya was always in control and connected with a barrage of damaging kicks to Whittaker’s legs, which hurt him.

Whittaker tried his best to be the agressor and take it to Adesanya and he believed he deserved to win and the judges got it wrong.

“I did,” Whittaker said when asked if he felt he’d done enough to win.

“I felt like I started off rocky, but I thought I won every round after that. It is what it is. You know what they say, don’t leave it to the judges.

“I’m happy that I fought my heart out and left it here, but I’m gutted.

“I don’t want to take anything away from him. He’s the champ. He beat me for the second time now and that’s that. We’re the two best in the world. I know this, he knows this, we know this.”

Adesanya praised Whittaker for an improved performance but said he needed to do more to take the championship belt off him.

“I knew he was going to bring everything because last time I took everything away from him,” he said.

“So he had nothing to lose

“I’m the champ, you want to come get it. I’m the big dog in this yard, so he couldn’t take me down at all.”

Round 1: Whittaker cautiously sized up Adesanya, but the first round went to the champ. Adesanya easily executed a knock down on Whittaker, who already looks demoralised and desperate for answers.

“He said something to his corner about his leg and he looked defeated. I don’t know if I’ve ever seen that.”

Round 2: A better round for Whittaker, who landed a couple of nice jabs and managed a takedown, but Adesanya easily recovered and got back to his feet. Whittaker is copping a barrage of leg kicks from Adesanya, who is still on top.

Round 3: An even round, with Whittaker managing a better takedown but he couldn’t keep Adesanya on the ground, and the champ once again wriggled free before landing some strong leg kicks.

Round 4: Whittaker is hanging in there as the fight heads to a final round. He got up on Adesanya’s shoulders but couldn’t land a finishing blow. The Aussie’s coaches in his corners are urging him to jab with his right hand.

Round 5: Whittaker landed his best takedown of the fight and had the better of the final round, putting the pressure on Adesanya with with heavy jabs. But it was all in vain in the end.

Tai Tuivasa is alongside the big boys of the heavyweight division after a crazy comeback win over UFC legend Derrick Lewis at UFC 271.

The Aussie is potentially one win away from earning a title shot after he knocked Lewis out cold with a staggering elbow strike in the second round.

His finish saw Lewis wobble on wonky legs before he crashed forwards in an ugly face plant.

Aussie booed out the Octagon

Australian Casey O’Neill has pulled off the biggest win of her career after sending Roxanne Modafferi into retirement with a defeat.

O’Neill won via a split decision after a three-round war which was heated from the start with O’Neill choosing not to touch gloves at the start of the first round.

When given a chance to speak inside the Octagon after the fight result was made official, O’Neill was booed by the crowd.

O’Neill had earlier said the torch had already been passed to her from Modafferi, adding that she didn’t care it was her opponent’s final fight. The crowd responded to her behaviour in brutal fashion.

The explosive start to the UFC undercard has continued with another insane comeback stoppage from bantamweight Douglas Silva de Andrade.

Silva de Andrade had taken a beating in the opening round with two of the three judges giving his opponent Sergey Morozov a 10-8 dominant round score as the fight went into the second round.

However, the fight was brutally turned on its head in the second round and Silva de Andrade finished the fight off by making Morozov tap late in the round.

“That is crazy,” UFC legend Daniel Cormier said in commentary for ESPN.

ESPN MMA journalist Ariel Helwani posted on Twitter: “I mean, this is just the craziest sport. What a wild fight”.

The UFC world was eagerly awaiting the debut of Zimbabwean-born New Zealander Mike Mathetha, who has secured worldwide attention with his “Blood Diamond” stage name.

But the hype deflated almost instantly as Mathetha was brutally choked unconscious by Jeremiah Wells on the preliminary undercard.

Veteran UFC journalist Damon Martin speculated in a Twitter post that Mathetha may have been rushed into such a high profile fight simply because of his teammate connection to Adesanya.

“Jeremiah Well gives Blood Diamond a rude welcome to the octagon by choking him unconscious with a rear-naked choke in the first round,” Martin posted.

“Everyone advances as their own speed so there’s no right or wrong amount of fights but that being said, it felt like he got a look largely being Adesanya’s teammate.”

Blood Diamond showed some tough defence when taken down, but was ultimately easily submitted in the first round.

“I seen his eyes go back,” Wells said inside the Octagon.

Israel Adesanya will defend his UFC middleweight title this weekend – but commentator Joe Rogan won’t be there to witness it.

The 32-year-old Adesanya will take on Robert Whittaker at UFC 271, but controversial figure Rogan will not be in attendance due to a “scheduling conflict”.

According to TSN Sports, former middleweight champion Michael Bisping will commentate the highly-anticipated bout alongside John Anik and Daniel Cormier.

Anik also served as MC at the ceremonial weigh-in on Saturday, a role Rogan usually fulfils.

Rogan has copped intense backlash over the past few weeks for spreading “misinformation” about the Covid-19 pandemic on his podcast The Joe Rogan Experience.

UFC boss Dana White was asked about Rogan at a press conference on Friday, but Adesanya quickly intervened.

“I’ve been in this fight game since 2008 and Joe Rogan is one of the nicest, coolest, humble motherf***ers I’ve had the pleasure of working with, understand that.

“F*** the noise, you know what they’re trying to do, you can’t control them, man, and he’s got the biggest platform in the world right now so that’s my n***** Joe Rogan, f*** the noise, just keep doing you Joe, have some mushrooms.”

The last time Adesanya and Whittaker faced off in the Octagon, he claimed a second-round KO victory at Marvel Stadium in October 2019.

The action at Houston’s Toyota Centre kicks off at 10am AEDT, but the main card doesn’t get underway until at least 2pm. Don’t expect to see Adesanya and Whittaker in the Octagon until around 3.30pm.

You can watch UFC 271 on Main Event, while the prelims will be streamed on Kayo.