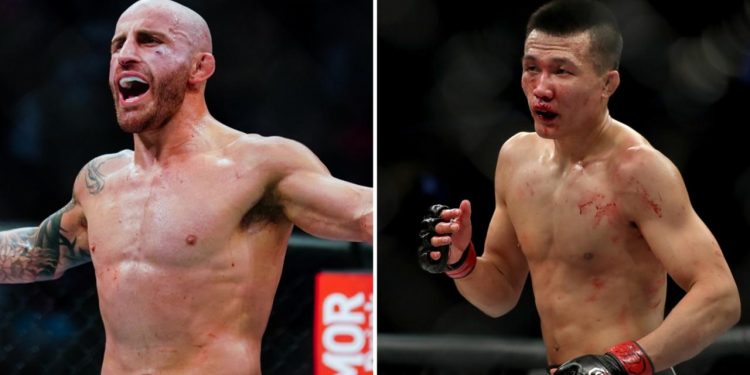 
There are levels to the game, and right now, Alexander Volkanovski believes he stands alone in the UFC’s featherweight division.

And if his opponent on Sunday (AEST) isn’t willing to accept that, the Australian is more than happy to slap him with a reality check.

Chan Sung Jung presents as the softly spoken underdog looking to steal Volkanovski’s belt at UFC 273, but ‘The Korean Zombie’ certainly has his opinions.

And while he offers them without fuss, it does beg the question: just much leniency does a ‘respectful’ opinion provide?

Sitting in a small room inside the Hyatt Regency in Jacksonville, Zombie – a nickname of his nickname – dealt out some honest judgements, through his translator, of the man he’ll face on the weekend.

For one, he believes that Volkanovski’s ‘hardware’ – referencing his 5’6 frame – is a weakness, even if it’s one he’s overcome time and time again.

Two, meaning no disrespect, he still places the current 145-pound champion behind Jose Aldo and Max Holloway – both men Volkanovski has beaten – in the debate over the greatest featherweight of all time.

And taking it one respectful step further, Zombie doesn’t believe Volkanovski should have been awarded the win against Holloway in their second go-around.

Again, none of it is really trash talk. It’s just opinion. But it’s certainly not the opinion of a man who is willing to accept he’s second-best.

In fact, while Zombie suggested Volkanovski might be the best overall fighter he’s faced, although not the scariest, he did make clear he believed he was better than the world champion across the board.

“I’m going to take these things and use it,” Volkanovski said of Zombie’s comments, in an interview with foxsports.com.au.

“I’ll go in there and do my thing, show you ‘you’re wrong, I don’t really care about your opinion’.

“Prove me wrong, then I might take it more seriously. But you’ve got Saturday to prove that. If not, your opinions mean nothing.”

For Volkanovski, it’s pretty simple: Zombie has a puncher’s chance, and that’s about it.

“I feel like the only way I can be beaten is if someone lands a lucky shot,” he said. “I feel like I’m that much better than everyone.

“You do have big challenges, like a Max Holloway, but everyone else I feel like it’s just a puncher’s chance, a Hail Mary.

“The thing is, when you look at it that way, who are the most dangerous guys when it comes to that? It probably is a guy like Zombie. Because that’s what he’s known for. He’s dangerous, I’m going to give him that respect. But that’s the only chance he’s got.

“If he wants to talk about being better here or there, that’s all a load of s***. You are trying to hope you land that lucky shot. You ain’t trying to beat me anywhere. You want to just knock me out or finish me, because you know you ain’t going to beat me. Let’s not beat around the bush. You know you need that knockout.”

Volkanovski’s words are the product of a new mindset; the 33-year-old finally ready to own the crown he’s worn since taking it off Max Holloway.

“Today, you’re talking to the champ,” Volkanovski, riding a 10-fight win streak in the UFC, declared to reporters on Wednesday in Jacksonville.

“I want to wear this crown. I earned it. I deserve it. So, I don’t have to feel like I’m being cocky by owning that crown that I deserve to wear.”