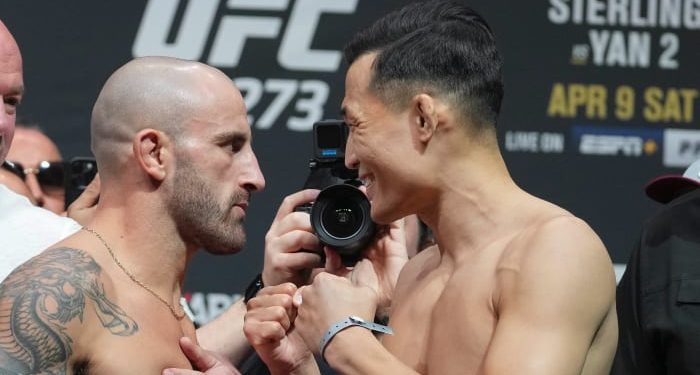 Mark Madsen held on to his zero.

Madsen (12–0) defeated Vinc Pichel by unanimous decision, overcoming a stiff challenge by dominating the third round with over four minutes of ground control.

This was a fight that was right there for Pichel (14–3), who entered the bout having won three in a row and seven of his last eight. But after a particularly strong second round, working the body and even taking Madsen down, he could not capitalize any of that momentum in the third and final round.

Madsen isn’t flashy in the cage. At 37, he is older than most other rising stars. But his success in the cage cannot be denied, and he has himself in position to fight a ranked opponent in his next bout.

UFC 273 is built around three bouts, including the main event of Alexander Volkanovski defending his featherweight title against Chan Sung Jung, who is best known as the Korean Zombie.

Somehow, that is the least anticipated of the top three matches. The card also features a bantamweight unification title bout pitting Aljamain Sterling against Petr Yan. This fight features an unparalleled backstory, as Yan intentionally injured Sterling in their last fight and has shown no remorse for nearly ending his career. Sterling has not stepped foot in the Octagon since that vicious knee from Yan in March 2021, and he has been patiently awaiting this chance at redemption.

But the fight with the most intrigue will be third from last, with Khamzat Chimaev seeking to continue bulldozing his way through the UFC’s welterweight division. A dominant victory could elevate him into title contention, even bypassing Leon Edwards on his way to a title match against reigning champ Kamaru Usman. Standing in Chimaev’s way is Gilbert Burns, a top-tier talent who ranks among the best in the division.

Burns has no intentions of serving merely as a stepping stone for Chimaev. This marks the toughest test for Chimaev in his career, making it a must-see encounter.

The top three fights of UFC 273 have the potential to make this card spectacular.