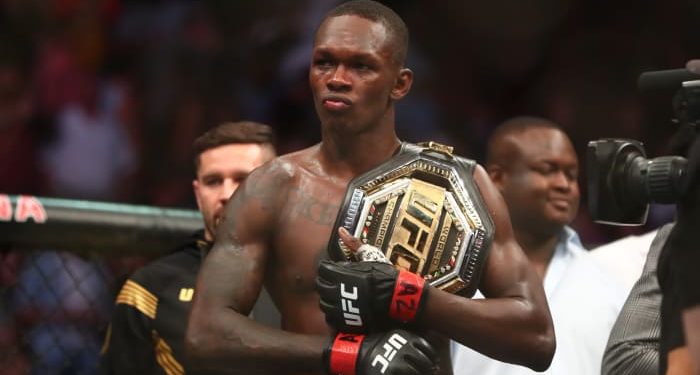 
Israel Adesanya extended his undefeated streak in the middleweight division.

And Alexander Volkanovski left no doubt.

That was the story of UFC 276, where the co-main event delivered two exciting fights—though the contrast was stark.

In the main event, Adesanya (23–1) defeated Jared Cannonier by unanimous decision. Ever the showman, Adesanya entered the Octagon to the theme music of The Undertaker, even wearing his signature hat and holding the urn–which contained Cannonier’s name on it. Unsurprisingly, Cannonier (15–6) proved to be a tough opponent, but he could not generate enough offense to put Adesanya in any kind of real danger.

Adesanya now continues his reign as middleweight champion. The only time he was defeated in the Octagon was when then light heavyweight champ Jan Blachowicz used his size to pin him down on the mat. Adesanya has a different type of challenge up next in former kickboxing rival Alex Pereira, and another new challenge now also presents itself for Alexander Volkanovski.

Volkanovski dominated all five rounds against Max Holloway in his unanimous decision. After two close fights against one another, Volkanovski (24–1) removed all doubt that he is better. Holloway (23–6) could not keep up with Volkanovski’s speed or power, and his face—and spirit—were battered by the end of this bout. Volkanovski now pursues the lightweight title, seeking to become UFC’s next double champ.

Alex Pereira delivered the biggest statement of his career at 276, knocking out Sean Strickland only 156 seconds into their fight. Strickland (25–4) entered having won six in a row and had finally put himself in title contention, but he decided to stand with Pereira (6–1), who connected with a devastating left hook that all but ended this bout. Pereira followed that up with a right hand, yet the damage was done.

Only three fights into his UFC career, Pereira is primed for a title shot. The middleweight division is full of contenders either coming off a loss or already defeated by Adesanya. But Pereira has two victories against Adesanya, both from their time in kickboxing, and the two are now destined to meet in the Octagon.

Earlier on the card, Bryan Barberena picked up the most significant victory of his career, defeating Robbie Lawler by TKO. This fight was full of action, turning in Barberena’s favor early in the second round after he landed a step-in elbow. A former welterweight champion, the 40-year-old Lawler (29–16, 1 NC) has now dropped four of his past five, but it still stands as a big win for Barberena (18–8).

Even the prelims were exciting. This was a night where Jim Miller defeated Donald “Cowboy” Cerrone by submission, picking up victory no. 24–the most in UFC history. Miller (35–16, 1 NC) applied the guillotine choke in the second round for the win, giving Cerrone (36–17, 2 NC) his sixth loss over his past seven fights. That was immediately followed by Cerrone leaving his cowboy hat and gloves in the cage, and announcing his retirement. Another moment of excitement occurred in the last fight of the prelims, when Jalin Turner destroyed Brad Riddell in a mere 45 seconds. Turner (13–5) should put himself in the lightweight top 15 after beating No. 14 Riddell (10–3), who he finished with a guillotine choke after drilling him with a strike to the skull in the opening moments of the fight.

The most disappointing moment of 276 took place in the opening bout when Sean O’Malley and Pedro Munhoz ended in a no-contest. Following an accidental eye poke from O’Malley (15–1, 1 NC), Munhoz was unable to continue. This appeared to be the long-awaited moment for O’Malley to break into the top-10 of the bantamweight division by beating ninth-ranked Munhoz (19–7, 2 NC), yet that wait will continue.

Two of the best of all-time retained their titles at 276, and one of the greats left his cowboy hat and gloves in the cage. As Cerrone steps away from the Octagon, Adesanya and Volkanovski are both entering a rarely attained, new level of excellence.

The championship reign of Israel Adesanya continues. He successfully defended his middleweight title against Jared Cannonier in the main event of UFC 276, winning by unanimous decision. Though this had a slower pace than expected, it marked another outstanding performance from Adesanya.

Adesanya (23–1) made his way to the cage wearing The Undertaker’s signature hat, holding the urn and playing his theme, which was even more entertaining considering it took place only a few feet away from WWE’s Vince McMahon, Stephanie McMahon, Paul “Triple H” Levesque, and Pat McAfee, who were all sitting cageside. They were treated to a signature performance from Adesanya, who put forth another high-level performance with the title on the line.

All the rounds were competitive, with all but one favoring Adesanya. He was too elusive for Cannonier (15–6), who could not do any damage to the champ. Adesanya landed outside kicks, showed off that elite takedown defense and had an answer any time Cannonier appeared to be building momentum. Cannonier fought a very good fight, but Adesanya was a step better.

There were boos from the crowd at the end of the fight, but this was an elite showing from the world’s most elite middleweight. Next up for Adesanya should be Alex Pereira, a decorated kickboxer who will be a completely different type of opponent for the champ.

After two close fights, there is no longer any question.

Alexander Volkanovski is on a different level than Max Holloway.

Volkanovski (24–1) dominated Holloway (23–6), winning by unanimous decision. This now stands as his signature victory, controlling every round and making Holloway look ordinary.

Volkanovski’s right hand was a factor in the opening round. His speed was a problem for Holloway for the majority of the first, until he finally landed some damaging shots over the final 60 seconds of the round.

The key moment of the second round took place when Volkanovski opened up a nasty cut above Holloway’s left eye with a devastating right hand. In addition to a relentless offense, Volkanovski possesses some of the best defense in the sport. He repeatedly made Holloway miss, then compounded the problems for Holloway by drilling him with his jab.

Volkanovski landed repeated shots in the third, completely controlling the round. It was no different in the fourth where, again, Volkanovski was a step ahead. Holloway needed a finish in the fifth round, and he tried a new approach with a level change in the opening minute, but it went nowhere. Volkanovski also damaged Holloway’s right eye, leaving the challenger’s face in ruins.

Next for Volkanovski is his pursuit of the lightweight title.

Alex Pereira has revealed himself to be the next top contender for the middleweight title.

The decorated kickboxer dropped Sean Strickland with a left hook, finishing the fight with his ensuing right hand. In only his seventh career fight, Pereira (6–1) has instantly become the top challenger for Israel Adesanya, whom he has already defeated twice in kickboxing.

This was the first loss for Strickland (25–4) in four years, and it ends his six-fight win streak. It is also an emphatic statement for Pereira, who should jump right to a title fight. The top 10 of the middleweight division is full of fighters who are either coming off a loss or already lost to Adesanya.

Unless Jared Cannonier dethrones Israel Adesanya later tonight, which would put Adesanya in position for an immediate rematch, then Pereira is next in line for the middleweight title.

Bryan Barberena scored the biggest victory of his career, delivering a TKO win against Robbie Lawler.

An unrelenting pressure from Barberena (18–8) was the difference. Lawler (29–16, 1 NC) did some early punishment with his jabs, but a step-in elbow was followed by a flurry of ferocious shots from Barberena.

Though the 40-year-old Lawler had entered the bout having only won once in his previous five fights, beating him is still meaningful. Barberena now holds wins against Matt Brown and Lawler.

Sean O’Malley will have to wait longer for his chance to break into the top 10 of the bantamweight division.

In what was ruled an accidental eye poke, O’Malley (15–1, 1 NC) fought Pedro Munhoz to a no-decision in the opening bout of UFC 276.

The eye poke occurred just over three minutes into the second round, and Munhoz (19–7, 2 NC) was unable to continue. It caused the card to open in an extremely unsatisfying manner, as this could have been a defining moment for O’Malley, or a chance for Munhoz to redeem himself after two losses.

UFC 276 has the potential to be an unforgettable night. That possibility was certainly strengthened on the prelims.

Jalin Turner looked outstanding in his victory against Brad Riddell, who entered the bout ranked No. 14 in the lightweight division. Turner only needed 45 seconds to put away Riddell, cracking him with an opening-round strike and then forcing him to tap with a guillotine.

That fight followed another major moment, as Jim Miller defeated Donald “Cowboy” Cerrone by submission. That victory marked win no. 24—the most in UFC history—for Miller, and it was immediately followed by Cerrone announcing his retirement.

One of the greatest fighters to ever step in the Octagon, Cerrone (36–17, 2 NC) has struggled over the majority of the past three years. His last victory took place in May 2019, and he then went winless in his next seven fights, losing six of them. But that doesn’t detract from his greatness. His next pursuit is acting, but he will forever be linked to the Octagon.

Cerrone was built to deliver Fight of the Night performances. He holds memorable victories against Charles Oliveira, his first bout against Miller from 2014, Edson Barboza and Eddie Alvarez, as well as memorable bouts against Nate Diaz, Benson Henderson and Al Iaquinta. His departure from the UFC marks the end of an era, a phenomenal stretch for the sport in which Cerrone never needed a title to make his mark known in the sport.

UFC 276 is the centerpiece of International Fight Week, and it is built around two title bouts.

In the main event, Israel Adesanya defends his middleweight title against Jared Cannonier. Eleven years into his career, this marks Cannonier’s first UFC title fight. Standing in his way is the great Israel Adesanya, a nearly unstoppable force who has won 11 of his 12 fights in the Octagon. Adesanya has never lost a middleweight bout throughout his career, and that is the puzzle to solve for Cannonier.

Alexander Volkanovski defends the featherweight championship against Max Holloway in the co-main. This is the third time they have squared off against one another, with Volkanovski claiming the first two. Holloway has run through all the top contenders in the division, except he has yet to find an answer for Volkanovski. If Volkanovski emerges victorious, look for him to make a run at the lightweight title in pursuit of becoming a double champion.

The remainder of the 276 card is solid. Sean Strickland and Alex Pereira face off in the equivalent of a No. 1 contender’s bout for Adesanya’s middleweight title. Strickland has been inching closer and closer to a title shot, but Pereira—who already owns two wins against Adesanya from their kickboxing matchups—would make for a better story line if Adesanya retains his title.

Former welterweight champ Robbie Lawler against veteran Bryan Barberena, a chance for the 40-year-old Lawler to win his second in a row. And the opener is the entertaining Sean O’Malley facing his greatest test against No. 9 bantamweight Pedro Munhoz. If O’Malley leaves Vegas with a win, he will also finally crack the division’s top-10.

The buildup to the co-main event should be compelling, and 276 is set to close out with two appointment-viewing championship bouts.