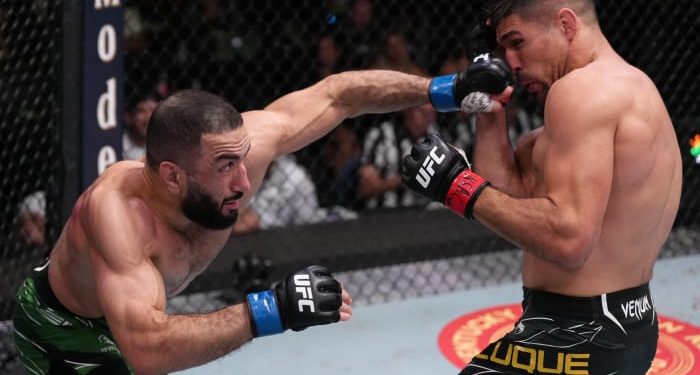 
In a rematch six years in the making, Belal Muhammad (21–3 MMA, 12–3 UFC) was able to exact some revenge against Vicente Luque (21–8–1 MMA, 14–4 UFC) while also keeping his name relevant in the UFC’s welterweight title picture.

Muhammad largely nullified Luque’s aggression over the course fo 25 minutes, taking home a clear-cut decision win in the headlining bout of Saturday’s UFC on ESPN 34 event at the UFC Apex.

As expected, Luque looked to press the pace early, but Muhammad moved well to avoid the charges and picked his opportunities to counter on the feet. In the latter stages of the opening frame, he was also able to drive forward and take the action to the floor, setting up a strategy he would use throughout the contest.

Muhammad’s lateral movement, well-timed counters and slick takedowns saw him control the flow of the fight for all but a short stretch in the third frame, when Luque was able to land a few crisp left hooks on the feet that clearly took their toll. But Muhammad was ultimately able to recover and then again seize the momentum, controlling until the final bell and taking home the unanimous decision, 49-46, 49-46 and 48-47.

After the fight, Muhammad said the complete nature of his performance proved his well-rounded skills.

Entering the contest at No. 6 in the UFC’s official welterweight rankings, Muhammad will certainly move up after taking out No. 5 Luque. After the win, he called out No. 1 Colby Covington, suggesting the former interim champion has been cherry-picking past opponents such as Jorge Masvidal and Tyron Woodley, and is currently angling for a fight with longtime lightweight contender Dustin Poirier.

“I’m gong to stop calling for the champ because nobody wants to give me that shot, so let me get the big-mouth Karen, Colby Covington, who’s out here calling out ’55ers,” Muhammad said. “Come fight a real 70-pounder, you coward. I’m a real 70-pounder.

“I’m winning fights. I’m not Masvidal off of two losses. I’m not Woodley off five losses. I’m ‘Bully B’ off of seven wins. Come and fight a real challenge, coward.”

Complete UFC on ESPN 34 results include:

How Russia's invasion of Ukraine is impacting Poland