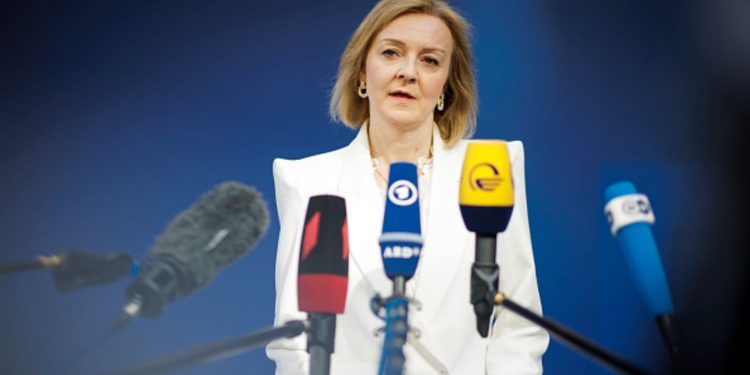 Truss had previously warned the U.K. would have “no choice but to act” if EU lawmakers do not show the “requisite flexibility” over the protocol.

British Foreign Secretary Liz Truss confirmed on Tuesday that the government intends to introduce legislation to make changes to the Northern Ireland protocol “in the coming weeks.”

The protocol is part of the post-Brexit trading agreement which requires checks on some goods entering Northern Ireland from the rest of the U.K.

Truss’ comments are likely to exacerbate the risk of retaliation from Brussels and could kickstart a trade war with the world’s largest trading bloc.

“Our preference is to reach a negotiated outcome with the EU and we have worked tirelessly to that end and will continue to do so,” Truss said in the U.K.’s House of Commons.

“The government is clear that proceeding with the bill is consistent with our obligations in international law and in support with our prior obligations in the Belfast Good Friday Agreement,” Truss said, prompting jeers from opposition lawmakers.

The announcement comes shortly after Prime Minister Boris Johnson held emergency talks in Belfast in a bid to deescalate tensions over the protocol.

The agreement came into force in January last year because special trading arrangements were needed after the U.K. left the EU. The protocol was designed to avoid the need for a hard border between Northern Ireland and the Republic of Ireland, which remains part of the bloc.

However, the terms of the deal have resulted in delays and price rises as goods arriving in Northern Ireland require some checks.

Sterling was steady after the announcement. The U.K. currency was last seen trading at $1.2487 on Tuesday afternoon, up around 1.4% for the session.

‘This bill is legal’

“Respect for the rule of law runs deep in our Tory veins, I find it extraordinary that a Tory government needs to be reminded of that,” Simon Hoare, Conservative lawmaker and Northern Ireland Affairs Committee chair, said in parliament.

His comments come amid concerns about the legitimacy of a bill that could be rendered ineffective if the government is judged to be in breach of international law.

Hoare asked for reassurances from the Conservative government that it intended to honor the rule of law with this proposed bill. In response, Truss said: “This bill is legal in international law and we will set out the legal position in due course.”

Northern Ireland is currently gripped by a power-sharing crisis after the province’s largest unionist party blocked the election of a Stormont Assembly speaker — effectively preventing the formation of a new executive.

The Democratic Unionist Party, which came second behind Sinn Fein in May 5 elections, says U.K. lawmakers must abolish the protocol, arguing that a customs border has been created across the Irish Sea and this undermines Northern Ireland’s place within the U.K.

The EU has urged Britain not to take unilateral action to override parts of the Brexit deal with Northern Ireland, warning there will be consequences if it does.

Johnson — despite renegotiating and signing up to the Northern Ireland protocol — has said “there will be a necessity to act” if the EU’s position does not change.

“Either they did not understand their own agreement, they were not upfront about the reality of it or they intended to break it all along,” Labour Shadow Foreign Minister Stephen Doughty said in the House of Commons.

“The prime minister negotiated this deal, signed it, ran an election campaign on it, he must take responsibility for it and make it work,” he added.

Analysts at political risk consultancy Eurasia Group have estimated that legislation enabling the government to unilaterally override the protocol would take at least six months to agree, citing opposition to the measure in the House of Lords, the second chamber of U.K. Parliament.

Germany’s Olaf Scholz has called on the U.K. to avoid taking unilateral action over the protocol, while Belgian Prime Minister Alexander De Croo has said that the U.K. not abiding by the deal would create a significant problem for the EU’s internal market.

The U.S., meanwhile, has encouraged dialogue between Britain and the EU to resolve the impasse.

Former U.K. Prime Minister Theresa May has warned that the U.K. scrapping parts of the protocol could harm Britain’s reputation for abiding by international law.

“The last thing they want is further uncertainty in trading arrangements amid global supply chain challenges. Now more than ever, flexibility and compromise are needed from both sides to reach lasting trade solutions, securing peace and prosperity,” she added.