Cases of the ‘super COVID’ variant that originated in the UK are spreading rapidly across the United States, a new study published on Sunday claims.

Researchers estimate that the variant, known as B 1.1.7., is between 35 percent and 45 percent more transmissible than strains seen earlier on in the pandemic.

Because of its more contagious nature, infections of the variant in the U.S. appear to be doubling about every 10 days.

The study appears to back a forecast from the Centers for Disease Control and Prevention (CDC), which predicted the variant would become the dominant variant in the nation by March.

Currently, there are at least 700 confirmed cases of the variant in the U.S., according to a DailyMail.com analysis of state and federal data.

Experts are also warning that the increased transmission rate of B 1.1.7. makes a spring surge inevitable and increase the urgency of getting as many Americans vaccinated as quickly as possible. 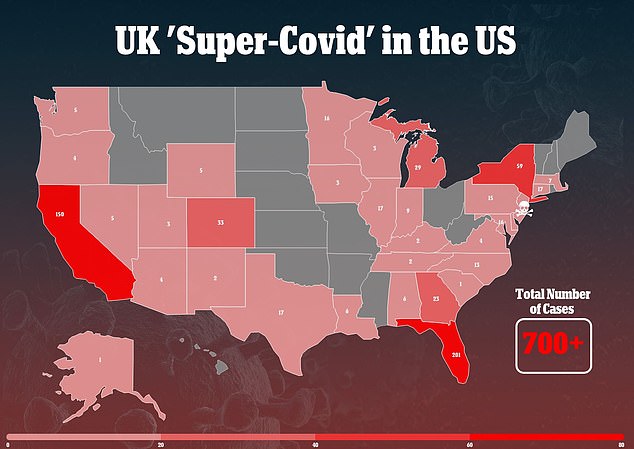 There are at least 700 cases of the UK variant known as B 1.1.7. in the U.S., a DailyMail.com analysis of state and federal data reveal 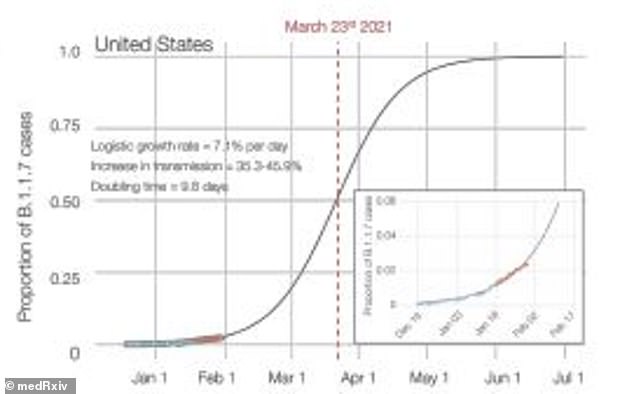 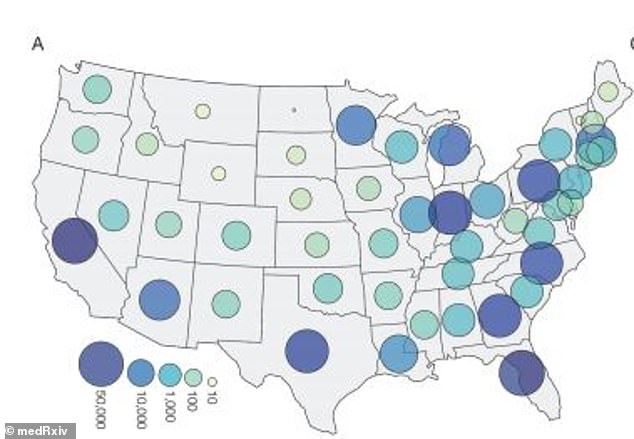 Researchers found the new variant’s prevalence among positive test results is increasing, doubling every 10 days across the country (above) 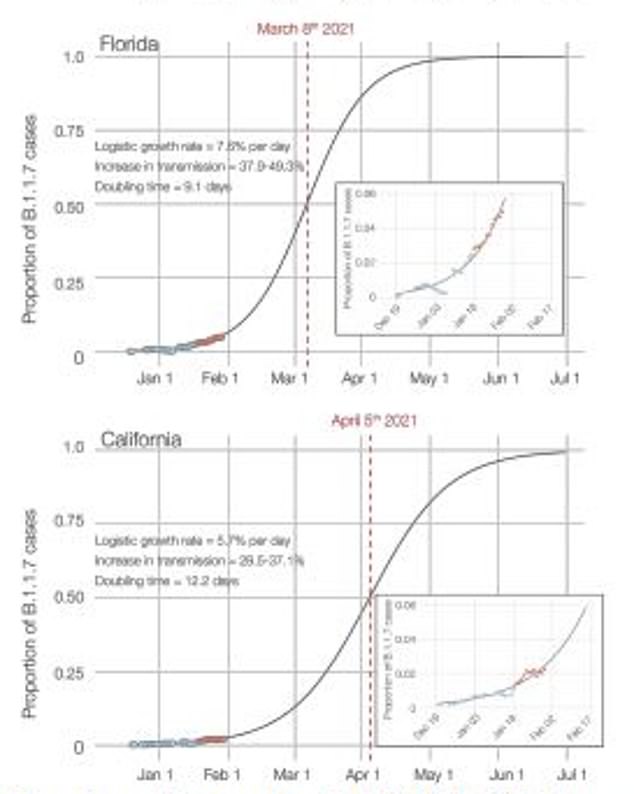 Cases involving the new variant are most prevalent in Florida (top graph) and California (bottom graph), doubling every nine days and 12 days, respectively

‘[B 1.1.7] is here, it’s got its hooks deep into this country, and it’s on its way to very quickly becoming the dominant lineage,’ co-author Dr Michael Worobey, an evolutionary biologist at the University of Arizona, told The Washington Post.

The UK variant was first discovered in the county of Kent in September, and now accounts for at least 61 percent of cases in Britain.

Most estimates put it at about 70 percent more infectious, but some studies suggest it could be twice as infectious.

More moderate projections say its transmissibility is only about 56 percent higher.

Officials in the UK says that variant may be 30 to 40 percent more deadly, and so far there have been two deaths in the US linked to the variant. 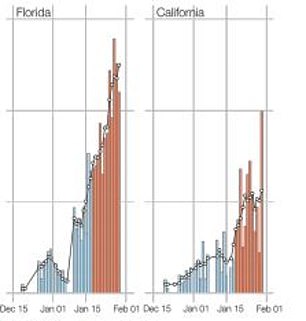 For the study, published on pre-print server medRxiv.org, the team sequenced 500,000 samples of the virus, called SARS-CoV-21 tested at Helix facilities since July 2020.

Beginning the week of October 18, 2020, just 0.2 percent of daily positive cases appeared to be linked to the UK variant.

The first case was identified in the U.S. on December 31, showing that the variant was in the country much earlier than previously believed.

However, the increase rapidly took off in January.

The nationwide proportion of B 1.1.7. cases increased from 0.8 percent of all positive tests during the first week of January 2021 to 3.6 percent in the last week.

Results showed that cases across the county are doubling every 9.8 days.

Researchers found the majority of B.1.1.7 sequences from the U.S. cluster were in two states: Florida and California.

The new report estimates that cases are doubling California every 12 days and even faster in Florida, at every nine days.

The authors note that B 1.1.7. still spreads the same way that original variants did and that masks and social distancing will help. 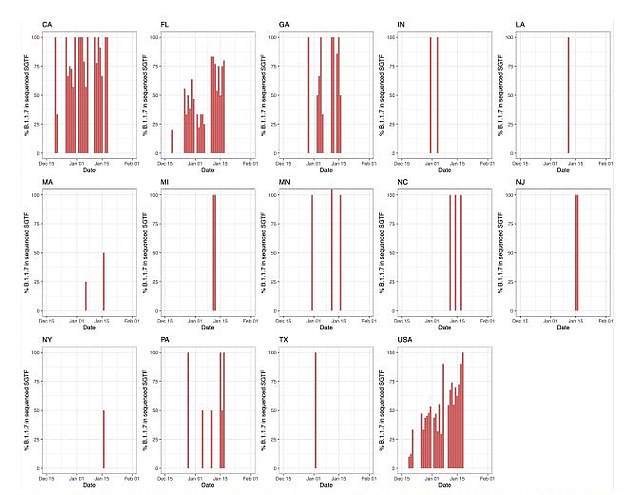 Several states saw their number of positive cases exponentially rise in January (above), matching CDC models that B 1.1.7. will become the dominant strain in the U.S. by March 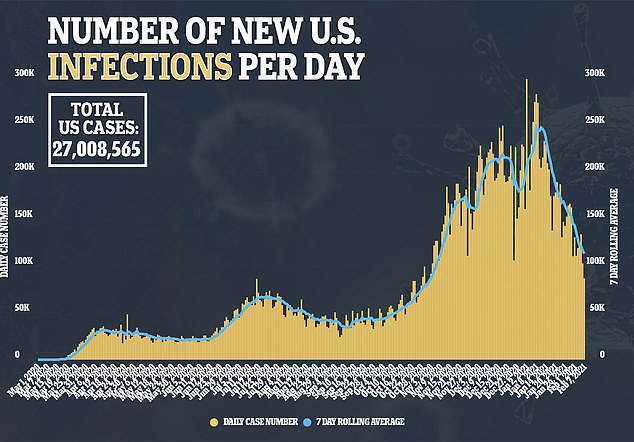 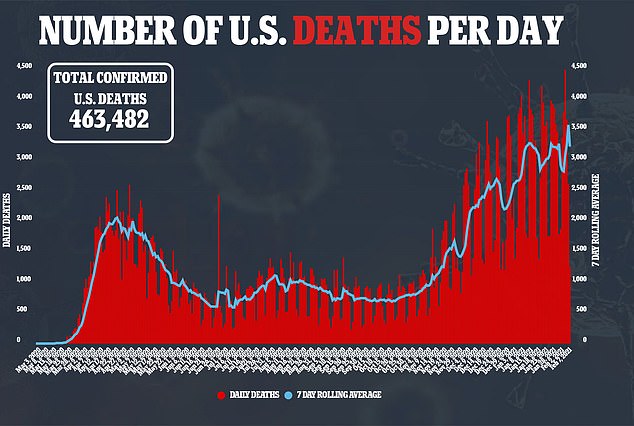 According to the CDC, Florida has the highest number of B 1.1.7. cases with 201 as of Monday morning, followed by 150 in California.

The study only looked at data through the end of January, but co-author of the study Dr Kristian Andersen, an immunologist at Scripps Research Institute, told the Post that the proportion of cases in Florida involving the new variant may have risen to 10 percent in the last week along.

Dr Mary Jo Trepka, an epidemiologist at Florida International University, told the Post that he is not surprised by the number of B 1.1.7. infections in Florida.

She says it is due to a lack of travel restrictions and mitigation measures such as mask mandates – even as cases continue to decrease across the county.

‘We’re in good shape in terms of numbers of cases coming down, the hospitals are doing well. So is that going to reverse because we’re seeing these variants?’ she told The Post.

‘The message is that we have to work harder to prevent transmission of all these cases of covid. If we don’t we’ll potentially see more variants. We need to get everybody vaccinated and we need to do a much better job at preventing transmission.’

Seoul to give free COVID-19 tests to pets

Saturday Kitchen: Naga Munchetty and Charlie Stayt get over 100 complaints