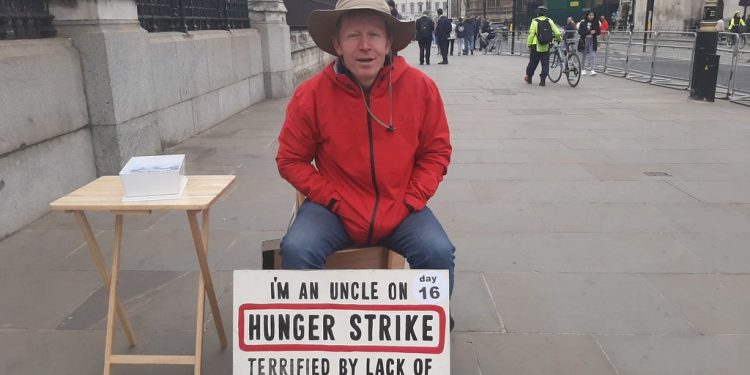 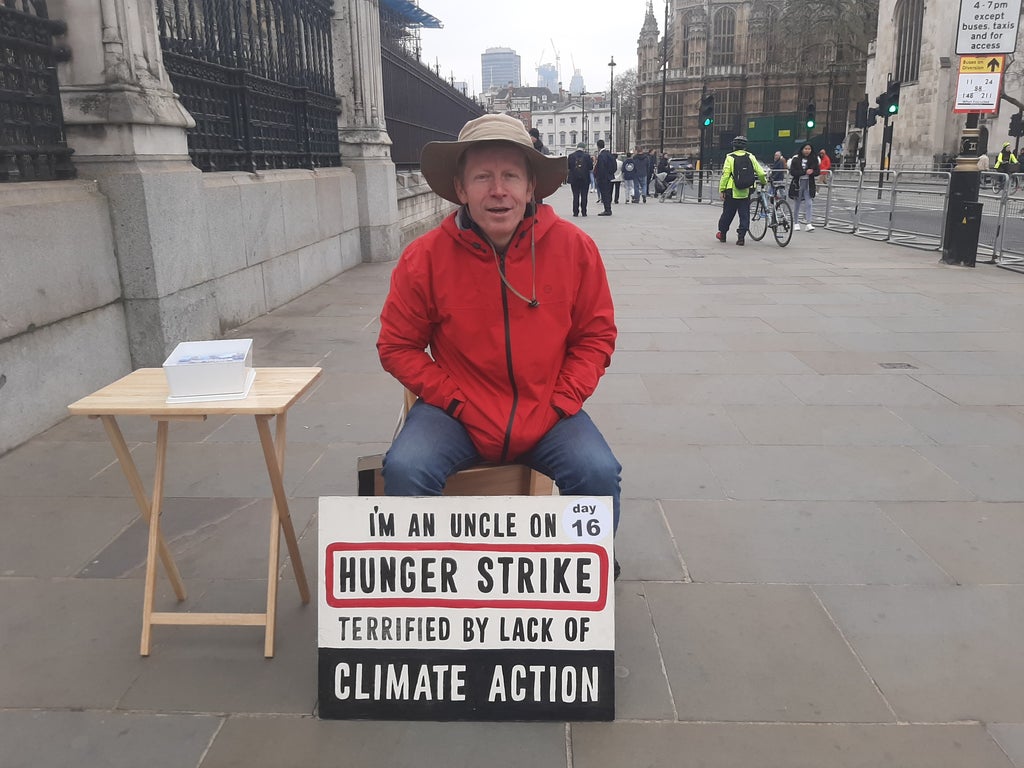 A climate activist who has been on hunger strike outside the UK Houses of Parliament for three weeks has said his protest was an “utter necessity” even though it was putting his life at risk.

Angus Rose, a 52-year-old software engineer, tells The Independent he would rather be doing something else – such as hanging out with friends – than sat outside Westminster refusing to eat any food.

But he says: “This is out of desperation.”

The activist has spent hours sat on a wooden chair outside parliament, as he has for the last 16 days, in a call for more action to inform MPs and the public on the scale of the climate crisis.

He is lively and passionate, even as he tells The Independent just water, green tea, black coffee and vitamins has been his diet for the past three weeks. He is the same as he talks about his nephews and nieces, whose future he says he is fighting for.

Passers-by stop to look at his sign – which says he is an “uncle on hunger strike” – and a large blown-up email sent to UK government minister Greg Hands, which is the reason for the protest.

“I am quite aware that my health may be permanently impacted,” he says. But he adds: “It is an utter necessity why I am here.”

Mr Rose says he wants MPs to receive the same presentation from top scientists that Boris Johnson did on the climate crisis – and which reportedly caused the prime minister to re-examine beliefs and take the emergency seriously.

The editor of Carbon Briefwho published the slides, told The Independent most of them were “101 climate science”. They included graphs on rising sea levels, increasing global temperatures and the impacts of a warmer world – including floods, heatwaves and wildfires.

Editor Leo Hickman said: “It is surprising really that it took quite this long for him to have his own personal epiphany on climate change. But it’s also reassuring that, when he was finally presented with these facts by the UK’s leading scientists, then he sat up and publicly committed to taking this issue seriously.”

Mr Rose says he wants this briefing – led by Sir Patrick Vallance, the UK government’s chief scientific adviser who also led Covid presentations – to be available for broadcast to the public.

Mr Rose, originally from South Africa but who has lived in London for two decades, claims this request has been rejected so far on the basis information on this topic is already availale.

The slideshow believed to have sparked Mr Johnson’s “road to Damascus” moment on the climate crisis were in fact made public by Freedom of Information request and published earlier this year.

But Mr Rose wants more; he is worried people may not engage with the wealth of information and reports available by themselves. “I’m looking for improved understanding. And that comes through a briefing, that is maybe no more than an hour and a half.”

The 52-year-old software engineer is now getting ready to spend potentially weeks more on hunger strike while waiting to hear if his demands will be met. A

t this point, he says he has lost all interest in food to the point where passers-by taunting him with doughnuts and sweets does not bother him.

But he has noticed the difference in himself. He tells The Independent he lacks energy in the morning and has lost 1st 5lb since he started his strike.

“But what led me to this point is it is more important for the uncle to break than the future of my nephew and niece to be imperiled.”

The Department for Business, Energy and Industrial Strategy has been approached for comment.