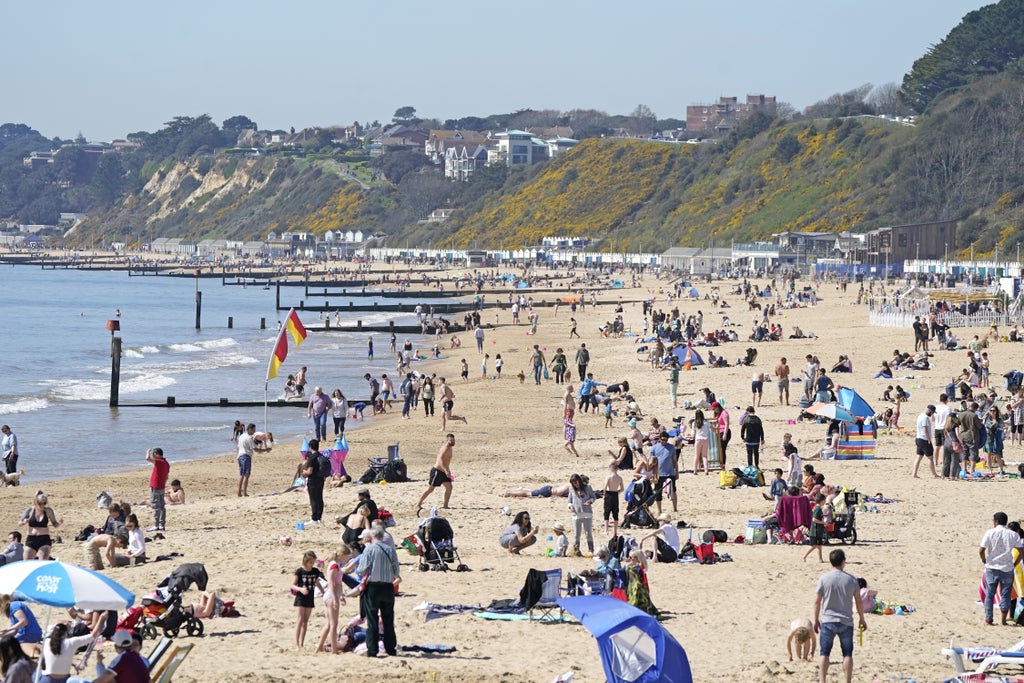 he UK has recorded its warmest day of the year so far after temperatures hit 22C (71.6F).

The mercury soared to the new high in St James’s Park in central London on Good Friday afternoon, the Met Office said, with temperatures predicted to rise further.

The previous high for the year was 20.8C, which was recorded in March.

But the warm weather has not been limited to the capital, with the mercury reaching the high teens in northern areas including Yorkshire and parts of Scotland.

Many parts of the country basked in glorious sunshine, clear skies and warm weather.

Met Office meteorologist Steven Keates had said: “It’s looking like Friday will be the warmest day of the year with highs of 22 to 23C, probably most likely in London.”

“The current highest temperature is 20.8C which was recorded in two places – St James’s Park in London on March 23 and Treknow in Cornwall on March 25, so we should beat that tomorrow.

“Widely, it will be quite a warm day.”

Mr Keates said, although there may not be uninterrupted blue skies, most areas of the UK would enjoy sunny spells and high temperatures.

He urged beach-goers to “stick on the sunscreen” and drink plenty of water to protect against higher-than-average UV levels.

The strength of UV rays could hit 6, which is considered “high” on the Met Office’s index.

This increase has been caused by slightly depleted stratospheric ozone, which helps protect Earth from the rays, he said.

Naturally occurring reactions in the atmosphere as well as man-made emissions both contribute to the phenomenon, which is usually temporary, the forecaster added.

He said: “It’s a naturally fluctuating cycle, in part not helped by human emissions.

“There will be a short-term, slight depletion (in stratospheric ozone)… and the sun gets stronger in mid-April as well.

“So if you’re going to be outside for a long time, stick on the sunscreen and protect yourself basically as there’s a slightly elevated risk of sunburn.”

Mr Keates said that some coastal areas may experience “misty and murky” conditions caused by cloud earlier in the day but a lot of areas would be “bright if not sunny”.

South-western parts of England and Wales had seen misty and cloudy weather during the morning.

Late in the afternoon there could be some showers across the Pennines and southern Scotland, but they are unlikely to be heavy.

Mushrooms emerge from the shadows in pesticide-free production push

Mushrooms emerge from the shadows in pesticide-free production push