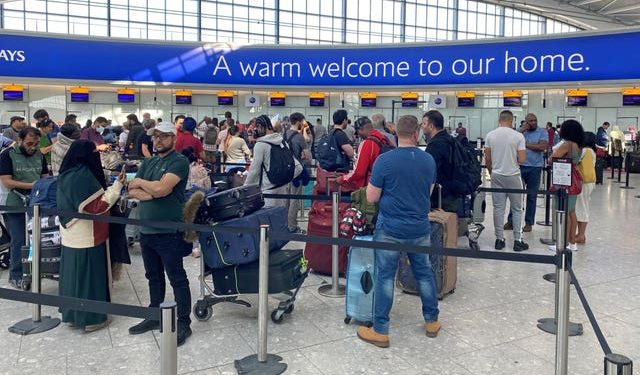 The UK is expected to see travel disruption on the roads, with millions returning from Easter getaways.

Some 3.96 million drivers are predicted to make their journeys on Monday, causing delays on many major routes, the RAC warned.

It comes after rail and air passengers saw long queues while P&O Dover-Calais ferries remained suspended over the weekend.

Monday morning has already brought “nightmare” queues for Eurostar customers at Gare Du Nord in Paris after a border control IT failure which meant passengers could not board trains.

One passenger, Charlie Daffern, 36, from Cheltenham, said all trains had been delayed for at least an hour.

He told the PA news agency: “It’s a nightmare here. We have been stood in the queue for check-in/security for over an hour and a half. Probably another hour to go.

“People are becoming very restless and some people panicking as they have flights to catch from Heathrow this afternoon. I take it all with a pinch of salt. The main problem is lack of communication.”

Loic Kreseski, 25, who lives in Hackney, said “hundreds and hundreds” were in queues at the station.

“I heard French border officers saying that they had never seen that. People are upset due to the delays and the fact that you have to stand still for hours. It’s very upsetting when we know the price of the tickets.

“I would say that easily more than a thousand people are queueing in Gare du Nord. (I am) frustrated especially when we know the price of the tickets, the lack of announcements and customer service.”

Network Rail has been carrying out 530 engineering projects costing a total of £83 million, which have meant the closure of the West Coast Main Line between London Euston and Milton Keynes for four days since Good Friday due to upgrades of the existing line and HS2 work.

Parts of the railway between Birmingham International station and Coventry have also been closed, along with lines around Crewe station.

Passengers at Manchester, Heathrow and Gatwick airports have also contended with long queues.

Lucie Spencer, 25, a salon owner from Lancashire, said customers were dealing with “frustrating” and “annoying” delays after her flight was held for over an hour due to apparent staff shortages.

She said: “Queues were very long, we were in Terminal 2. They moved consistently but slowly. The mood of the airport was generally calm but you could hear people moaning, of course, as it’s not fun standing in queues for so long.

“It’s definitely due to major staff shortage, TUI had basically no check-in desks open, just self check-in, which seemed to cause the huge queue. Security was then huge queues as there was only three of eight security lanes open.

“Queues to get in all bars and restaurants, meaning we had to give up to it so as to not miss our flight.

“Still sat on plane, should have taken off at 8.30am but the luggage wasn’t loaded onto the plane in time.”

A Tui spokesperson said: “We can confirm that unfortunately due to staff shortages at Manchester Airport today, some customers are experiencing longer-than-usual queue times at check-in. Please be assured that our teams are working as quickly as they can.

“We have contacted all customers due to depart in the next two weeks with advice on travelling with potential wait times in airports and have more information available on our website.”

The suspension of Dover-Calais sailings by P&O Ferries has led to a shortage of capacity on the key route and contributed to large queues of lorries on the roads approaching the Port of Dover in recent days.

To add further worry, supplies of petrol and diesel at filling stations in some areas of the country have been running at around half their usual level.