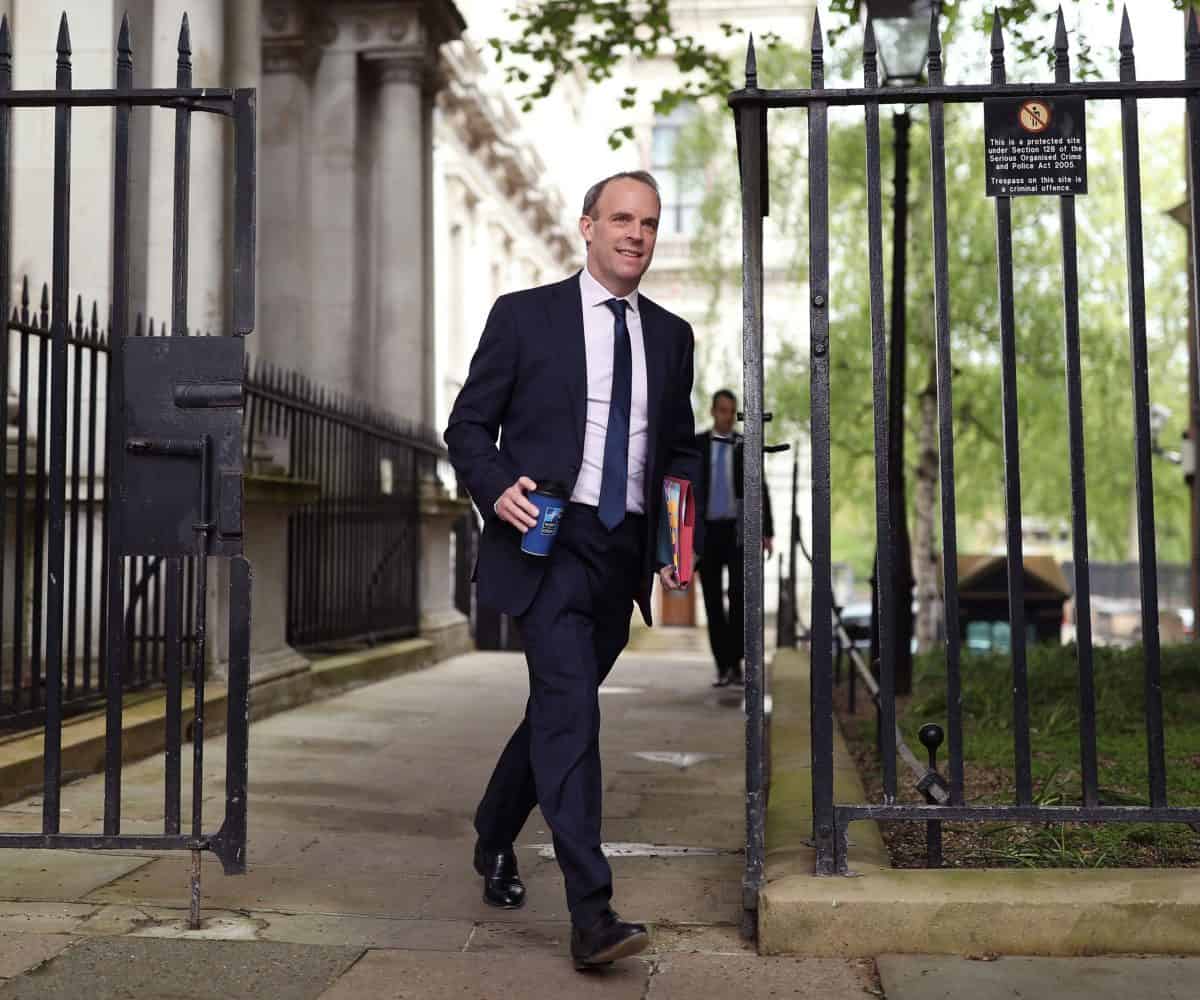 In a leaked video call, obtained by HuffPost UK, the foreign secretary told staff that trading only with countries that meet European Convention on Human Rights (ECHR) standards would mean missing out on trade with “growth markets”.

Speaking during a question and answer session with Foreign, Commonwealth and Development Office staff, Raab said: “I squarely believe we ought to be trading liberally around the world.

“If we restrict it to countries with ECHR-level standards of human rights, we’re not going to do many trade deals with the growth markets of the future.”

The foreign secretary is also reported to have said: “We don’t junk whole relationships because we’ve got issues – we have a conversation because we want to change the behaviour.

“And I think we’re in a much better position to do that if we’re willing to engage. I can think of behaviour that would cross the line and render a country beyond the pale.

“But fundamentally I’m a big believer in engaging to try and exert positive influence even if it’s only a moderating influence, and I hope that calibrated approach gives you a sense that it’s not just words – we back it up with action.”

Raab’s opposite number Lisa Nandy, Labour’s shadow foreign secretary, said it was the second time in as many weeks “that the foreign secretary has been exposed talking up trade deals with countries that abuse human rights”.

It follows a report in The Times last week which revealed that Raab had indicated his openness towards signing a future trade deal “with our Chinese friends” at an event attended by senior diplomats from Beijing.

Nandy told HuffPost: “This is the second time in as many weeks that the foreign secretary has exposed for talking up trade deals with countries that abuse human rights.

“It is the latest example of a government entirely devoid of a moral compass and riddled with inconsistency, happy to say one thing in public and another behind closed doors.

“Today the prime minister stood up in parliament and lauded the UK’s commitment to defending human rights around the world.

“This afternoon, the foreign secretary is sending a very clear message to countries engaged in appalling human rights abuses that this government welcomes them with open arms.”

“Now in private he says the government is prepared to sign trade deals with any country, even those violating the laws drawn up by British officials after the horrors of the Second World War.

“No wonder the government are talking up the prospects of deeper trade links with China in their integrated review and continuing to block the genocide amendment to the trade bill.”

Amnesty International UK said Raab’s “shocking” remarks would “send a chill down the spine of embattled human rights activists across the globe”, citing a “depressing pattern on human rights from this government”.

“And in some countries such as Myanmar, the army has control of economic activity which directly funds its military operations, including those implicated in human rights abuses.

“Trade that arises from or contributes to human rights violations can never be truly sustainable.

“Companies will rightly worry about their obligations to avoid involvement in human rights abuse, investors will take fright and the whole edifice will come tumbling down.”

An FCDO spokesperson said the audio had been “deliberately and selectively clipped to distort the foreign secretary’s comments”.

They added: “As he made crystal clear in his full answer, the UK always stands up for and speaks out on human rights.

“In his full answer, in an internal meeting, he highlighted examples where the UK has applied Magnitsky sanctions [sanctions to specific individuals and organisations rather than entire countries] and raised issues at the UN regardless of trade interests, and that this was a responsible, targeted and carefully calibrated approach to bilateral relations.”

Related: Dominic Raab credited for ‘epic trolling’ as he warns democracy is “in retreat” around the world