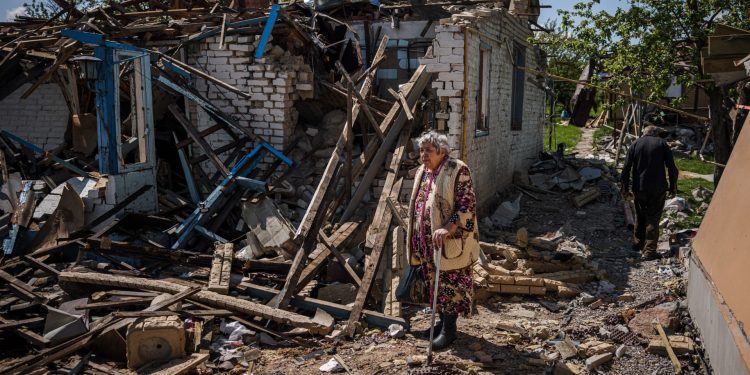 How could Russia react to Finland and Sweden’s NATO move?

With Finland and Sweden both announcing their bids to join the Western military alliance NATO on Sunday, ending a long modern history of military non-alignment, all eyes are on Russia’s reaction.

Moscow has already expressed outrage at the idea of its old foe NATO’s potential imminent expansion, warning it would take “retaliatory steps” against the country.

Geopolitical experts are assessing the possible actions Russia could take, saying these could range from an increase in provocative acts against NATO members, such as incursions into the alliance’s airspace, or cyberattacks and more soldiers placed along the borders Russia shares with NATO members: Latvia, Estonia, Lithuania, Poland and Norway.

Read more here: NATO is about to get bigger and Putin is unhappy: Here are 3 ways Moscow could react

Belarus’ announcement last week that it will deploy special operations forces along the Ukraine border — as well as air defence, artillery and missile units to training ranges in the west of Belarus — is likely designed to pin down Ukraine’s forces away from eastern Ukraine where fierce fighting is taking place with Russia, the U.K. military has said.

“The presence of Belarusian forces near the border will likely fix Ukrainian troops, so they cannot deploy in support of operations in the Donbas,” the U.K.’s Ministry of Defence said in an intelligence update on Twitter Monday.

Despite early speculation, to date Belarusian forces have not been directly involved in the conflict but Belarusian territory has been used as a staging post for Russia’s initial advance on Kyiv and Chernihiv, the ministry noted, added that Russia has also launched air sorties and missile strikes from Belarus.

“Belarusian President Lukashenko is likely balancing support for Russia’s invasion with a desire to avoid direct military participation with the risk of Western sanctions, Ukrainian retaliation and possible dissatisfaction in the Belarusian military,” the ministry said.

Finland and Sweden will both bring “real military capability” if they become members of NATO, according to Ben Hodges, a former commander in the U.S. Army in Europe.

“They will be security providers, not consumers,” he added, saying the move changes the security environment for the North Atlantic Alliance.

“This is so good for the alliance, but it’s also good for both countries and for all of Europe,” he said.

Hodges said Russia’s attack on Ukraine made Finland and Sweden feel the need to join the 30-nation strong military alliance. “This is going to go down on a list of huge blunders by President Putin and the Kremlin,” he said.

Ultimately, besides threats and complaints, there’s nothing the Russian president can do because his military is tied up at the moment, Hodges added.

Ukrainian forces say they have pushed back the Russian military in the region around Kharkiv in northeastern Ukraine, and near the border with Russia.

“The 227th Battalion of the 127th Brigade of the Territorial Defense Forces of the Armed Forces of Ukraine of Kharkiv city pushed back the Russians and reached a section of the state border,” the Ministry of Defense of Ukraine posted on Facebook on Monday morning.

Ukrainian forces have been carrying out a successful counter-offensive north of Kharkiv toward the border with Russia over the last week, while heavy fighting also continues in the eastern Donbas region.

Ukrainian air defense forces and anti-aircraft missile forces said on Facebook Sunday they had downed 11 enemy targets over the past 24 hours, including two helicopters, seven drones and two cruise missiles.

On Sunday, Ukraine’s military said it is preparing for more Russian attacks around Izyum, a city to the south of Kharkiv that’s become a focus of fighting in recent days.

Moscow’s forces have been trying to fight their way south from Izium as part of a pincer movement aimed at outflanking Ukrainian forces dug in to defend the eastern frontline, Reuters reported.

Ukraine can win the war against Russia, NATO’s secretary general said on Sunday, adding that Russia’s invasion is “not going as Moscow had planned.”

“Russia’s war in Ukraine is not going as Moscow had planned,” he said at a press conference. “They failed to take Kyiv. They are pulling back from around Kharkiv. Their major offensive in Donbas has stalled” and “Russia is not achieving its strategic objectives,” he added.

U.S. Senate Republican Leader Mitch McConnell said he expected the Senate to vote on $40 billion in proposed aid to Ukraine on Wednesday after holding a related procedural vote on Monday.

“We expect to invoke cloture – hopefully by a significant margin – on the motion to proceed on Monday, which would set us up to approve the supplemental on Wednesday,” McConnell told reporters on a conference call from Stockholm after visiting the Ukrainian capital on Saturday. He was referring to a procedural “cloture” vote that caps further debate on a matter to 30 hours.

STOCKHOLM — Sweden’s ruling Social Democrats said on Sunday they backed the country joining NATO, abandoning decades of opposition in the wake of Russia’s invasion of Ukraine and creating a large parliament majority in favor of membership.

With neighboring Finland already set to hand in its application, Prime Minister Magdalena Andersson is now all but certain to launch a formal application within days.

Ukraine not ‘overoptimistic’ despite Russian troops pulling back near Kharkiv, official says

Ukrainian soldiers stand on a multipurpose light armoured towing vehicle near Bakhmut, eastern Ukraine, on May 15, 2022, amid the Russian invasion of Ukraine.

Ukraine’s deputy prime minister for European and Euro-Atlantic integration, Olga Stefanishyna, said she sees a “cautious amount of great news” in the country’s defense against Russia. In particular, she pointed to Russian troops pulling back from around Kharkiv, Ukraine’s second-largest city, in recent days.

“But we are not overoptimistic in that regard,” she said in an interview on ABC’s “This Week.” “We see that Putin has readjusted his strategy, and the only possible winning scenario for him is a long-lasting war, which is not the case for us and the democratic world. … The unconditional victory still remains the way forward.”

Russia’s navy remains in “full preparedness to continue shelling,” Stefanishyna said, adding that “the bombarding of the eastern part of Ukraine, which are the major supply chains for the humanitarian and defense assistance, have been attacked over these nights.”