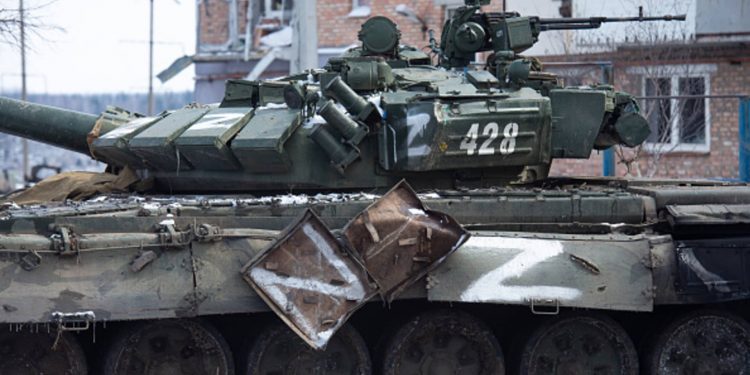 Ukraine’s ‘polite’ reply to Henry Kissinger: We will not give an inch of land to Putin

Henry Kissinger speaks during a 2007 interview in Washington.

A Ukrainian MP has given what he called a “polite” reply to Henry Kissinger’s suggestion that Ukraine should be prepared to cede some territory to Moscow in order to reach a peace deal.

“I think Mr Kissinger still lives in the 20th century and we are in the 21st century and we are not going to give up any inch of our territory,” Oleksiy Goncharenko, a Ukrainian member of parliament, told CNBC Wednesday. “That would be the worse signal to Putin,” he added.

“We should stop Putin now and not let him go further,” Goncharenko said, adding that he believed the best way to establish peace was to bring Ukraine inside the European Union as quickly as possible.

Former U.S. Secretary of State and National Security Advisor Henry Kissinger caused a stir earlier this week when he suggested that Ukraine should be prepared to cede some territory to Russia in order to reach a peace deal with Moscow.

Speaking on a panel at the World Economic Forum on Monday, Kissinger said “ideally, the dividing line should return to the status quo ante,” meaning a return to the existing state of affairs before the war, suggesting that he thought that Russia should be allowed to retain Crimea, which it annexed in 2014.

Kissinger, who served under Presidents Richard M. Nixon and Gerald Ford, said that “pursuing the war beyond that point would not be about the freedom of Ukraine … but a new war against Russia itself.”

Ukraine’s President Volodymyr Zelenskyy has ruled out ceding any land to Russia as part of a deal, particularly in reference to the Donbas region in eastern Ukraine, where Russian forces are currently focusing on seizing. It’s unclear whether Kyiv might accept that Crimea remains in Russian hands, however.

Global prices for some grains have spiked since the Russia-Ukraine war started, with both countries contributing a significant percentage of the world’s supply for some of those commodities such as wheat.

“We clearly see the consequences of Russia’s invasion in Ukraine, it’s sending shock waves around the world, and the world economic growth forecast has been revised downwards considerably and the same is true in the EU,” Valdis Dombrovskis, European vice president and commissioner for trade for the European Commission, told CNBC on Wednesday.

Speaking to CNBC at the World Economic Forum in Davos, which has been focused on the plight of Ukraine as Russia’s invasion continues, as well as the global fallout from the war, Dombrovskis said the EU needed to act urgently to sever its energy ties with Russia.

The invasion has led the EU to scramble to reduce its reliance on Russian gas supplies although an EU-wide embargo on oil and gas from Russia is still not agreed upon.

“We urgently need to move away from our dependence on Russian fossil fuels,” Dombrovskis said.

A Russian official has reportedly said Moscow is ready to provide a humanitarian corridor for ships carrying food to leave Ukraine, in return for the lifting of some sanctions.

“We are always ready for dialogue with everyone who strives for peace, for a peaceful resolution of all problems,” Russian Deputy Foreign Minister Andrei Rudenko said Wednesday, according to Russian state news agency interfax.

“We have repeatedly spoken out on this subject that the solution to the food problem requires a comprehensive approach,” he said, “including the removal of sanctions restrictions that were imposed on Russian exports and financial transactions.”

On Tuesday, the president of the European Commission, Ursula von der Leyen, accused Russia of “weaponizing” food supplies in Ukraine by blocking exports of basic produce from the country, such as wheat and cooking oil. Global food prices have risen as a result of the reduced exports. Russia denies it is using food to pressure Ukraine’s allies into loosening sanctions.

Andrius Tursa, Central and Eastern Europe advisor at Teneo Intelligence, said in a note Wednesday that “there are no easy ways to unblock food exports via Ukraine’s Black Sea ports,” and that alternative export routes via land and rivers require time and investment to eliminate infrastructural and bureaucratic bottlenecks.

“The war will significantly lower Ukraine’s food production and exports for the foreseeable future,” Tursa said.

Malawi is feeling the impact of the war in Ukraine, president says

Malawi’s President Lazarus Chakwera said the rising prices of food, fuel and fertilizers — largely brought on by the war in Ukraine — is having an impact on the African economy.

“We should still work together to find solutions” to end the war, he said.

Shift from Russian gas will be ‘really painful’ for Germany, CEO says

The shift away from Russian gas will be, in the short term at least, “really painful for the industry” in Germany, Covestro Chief Executive Markus Steilemann told CNBC at the World Economic Forum.

“There’s very little opportunity to compensate [for that shift], it would cost hundreds of thousands of jobs — that’s my personal belief — and it would really hammer down the German industry context.”

He said German industry needs to be supported with the energy transition away from Russian gas, adding that “what we need to do, with full force, is transition to renewable energies” and to develop that sector in Germany.

Russian President Vladimir Putin chairs a meeting with members of the Security Council via a video link in Moscow, Russia May 13, 2022. Sputnik/Mikhail Metzel/Kremlin via REUTERS ATTENTION EDITORS – THIS IMAGE WAS PROVIDED BY A THIRD PARTY.

The U.S. has ended a crucial exemption that allowed Moscow to pay foreign debt to overseas investors in U.S. dollars through American and international banks, potentially forcing Russia into default.

The Treasury Department’s Office of Foreign Assets Control had permitted dollar payments on a case by case basis, enabling Russia to service its foreign debt up until now, although depleting its accumulated war chest of foreign currency reserves. OFAC announced in a bulletin Tuesday that the exemption would expire as of 12:01 a.m. ET on Wednesday.

Russia has a deluge of debt service deadlines coming up this year, notably $400 million in interest payments due in late June.

Adam Solowsky, partner in the Financial Industry Group at global law firm Reed Smith, told CNBC on Friday that Moscow will likely argue that it is not in default since payment was made impossible, despite it having the funds available.

Solowsky said the situation was entering “unknown territory” and that Russia and the U.S. were potentially looking at a period of “prolonged litigation.”

Read more on this story here.

A customer enters a Marks & Spencer Group Plc store in the Afimall retail and entertainment center at the Moscow International Business Center in Moscow, Russia, on Saturday, Aug. 8, 2015.

British retailer Marks & Spencer has announced that it will pull out of Russia, becoming the latest in a long line of companies to do so.

The food and clothing retailer ceased shipments to Russia in March and it said on Wednesday it would exit its franchise there, taking a charge of £31 million ($39 million).

In its latest earnings update, M&S said it was starting the current 2022-23 year from a lower profit base.

“The business is now much better positioned and had an encouraging start to the year. However, given the increasing cost pressures and consumer uncertainty, we do not currently expect to progress from this lower profit base in 2022-23,” it said.

The extent to which the EU will be involved in Ukraine reconstruction is uncertain, official says

The EU must support Ukraine in its reconstruction, a top official has told CNBC, but said that the degree to which the bloc foots the bill for the eventual rebuilding of Ukraine is a big unknown.

“It should be a European commitment, because Ukraine is in Europe and they want to enter the European Union and we consider them in our family so Europe can’t say ‘oh reconstruction is a matter for other global players’,” Paolo Gentiloni, economy commissioner for the European Commission, told CNBC Wednesday.

“How will we address this issue? This is an open question, but it’s not the question for now. For now, the issue is to support Ukraine because the fact that this resistance is successful is decisive for our future,” he said.

Russia’s invasion of Ukraine has been dominating the agenda at the World Economic Forum in Davos, Switzerland, with political and business leaders warning that the war is already having far-reaching consequences for global food supplies and geopolitical stability.

Liberal billionaire George Soros has said Russia’s invasion of Ukraine could be looked back on as the starting point of World War III.

At his annual dinner amid the World Economic Forum on Tuesday evening, Soros said the course of history had changed dramatically since the last event was held in Davos, Switzerland.

“Russia invaded Ukraine. This has shaken Europe to its core,” he told the audience.

“The European Union was established to prevent such a thing from happening. Even when the fighting stops, as it eventually must, the situation will never revert to the status quo ante. Indeed, the Russian invasion may turn out to be the beginning of World War III, and our civilization may not survive it.”

Zelenskyy says Russia is putting everything it has into Donbas fight

Ukrainian President Volodymyr Zelenskyy said Russia is using everything at its disposal in the fight for four cities in the eastern Donbas region.

“The situation in the Donbas now is very difficult,” Zelenskyy said in his nightly address to the nation. “Practically the full might of the Russian army, whatever they have left, is being thrown at the offensive there. Liman, Popasna, Sievierodonetsk, Slaviansk – the occupiers want to destroy everything there.”

Zelenskyy said the Ukrainian army is fighting back, but “it will take time and a lot more effort by our people to overcome their advantage in the amount of equipment and weapons.”

He told Ukrainians they should be proud of having held off Russia for three months in a war that many in Russia and the West expected to last three days.

NATO Secretary General Jens Stoltenberg speaks during a press conference ahead of the alliance’s Defence Ministers’ meeting at the NATO headquarters in Brussels on March 15, 2022.

NATO Secretary-General Jens Stoltenberg said that while the 30-member military alliance has not put troops into Ukraine, a Russian attack “on one NATO ally will trigger the full response from the whole alliance.”

“This is deterrence. The purpose is not to provoke conflict but to prevent conflict and preserve peace,” Stoltenberg said at the World Economic Forum in Davos, Switzerland.

Since Russia invaded Ukraine in late February, NATO has increased its military presence in eastern parts of the alliance, Stoltenberg said.

“Now we have 40,000 troops in the NATO command. We have more naval, the air capabilities, especially in the eastern part of the alliance and we have 100,000 troops on heightened alert,” he said. He added: “This is to send a very clear message to Moscow and leave no room for miscalculation or misunderstanding.”

What we know about the victims of the school shooting in Uvalde, Texas - The Washington Post