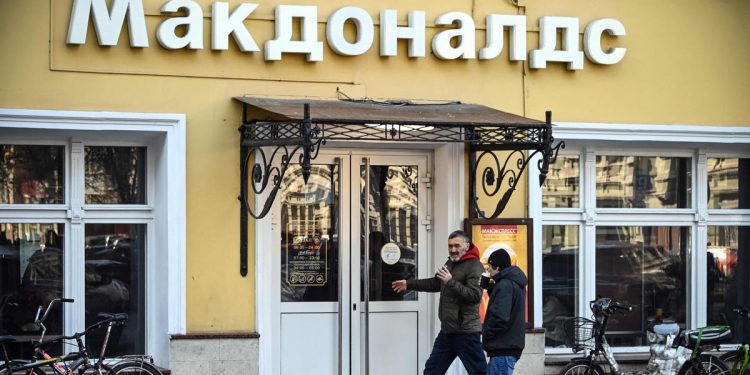 In the latest corporate withdrawal from Russia, McDonald’s said Monday that it has started the process of selling its Russian business, which includes 850 restaurants that employ 62,000 people.

The fast food giant temporarily closed its stores in early March but still paid employees. On Monday, pointing to the humanitarian crisis caused by the war, it said owning a business “is no longer tenable, nor is it consistent with McDonald’s values.”

It now seeks to have a Russian buyer hire its workers and pay them until the sale closes. McDonald’s opened in 1990 in what was then the Soviet Union.

In another historic move, Sweden’s government on Monday debated membership in NATO. The nation, which has been nonaligned for over 200 years, may formally request membership before the day is out.

Secretary of State Antony Blinken spent the weekend discussing the war in Ukraine with NATO allies, as well as Ukraine’s deputy prime minister.

USA TODAY ON TELEGRAM:Join our Russia-Ukraine war channel to receive the latest updates straight to your inbox

►Ukraine’s prosecutor’s office said Sunday that 227 children have died and over 400 have been injured since the invasion began.

Belarus has deployed forces, including special operations and air defenses, to the border of Ukraine, possibly in an effort to keep Ukrainian troops occupied there, so they cannot fight Russians in the Donbas region, according to a new assessment from the British Ministry of Defense on Monday.

“Despite early speculation, to date Belarusian forces have not been directly involved in the conflict,” the ministry stated on Twitter.

Belarus served as a staging area before Russia’s invasion in February. Moscow continues to use Belarus as a launchpad for missile strikes and sorties.

“Belarusian President Lukashenko is likely balancing support for Russia’s invasion with a desire to avoid direct military participation with the risk of Western sanctions, Ukrainian retaliation and possible dissatisfaction in the Belarusian military,” the ministry said.

STOCKHOLM — Swedish Prime Minister Magdalena Andersson on Monday told her country’s parliament that she sees “a historic change in our country’s security policy line” as the country prepares to seek membership of NATO.

“Sweden needs formal security guarantees that come with membership in NATO,” Andersson said during a parliamentary debate, adding that the country was acting together with neighboring Finland.

The debate is expected to be a formality as there is a clear majority of lawmakers in favor joining NATO. Sweden is expected to formally seek membership in the 30-member military alliance later Monday.

The move in Sweden, which has been outside military alliances since the Napoleonic Wars, came after Finland on Sunday announced that it, too, would seek to join NATO in the wake of Russia’s invasion of Ukraine on Feb. 24.

“Sweden is best defended within NATO,” Andersson said. “Unfortunately, we have no reason to believe that the trend (of Russia’s actions) will reverse in the foreseeable future.”

Almost three months after shocking the world by invading Ukraine, Russia’s military advancement in Ukraine is “losing momentum” and “not going as planned,” according to NATO officials.

“The brutal invasion (by) Russia is losing momentum,” NATO Deputy-Secretary General Mircea Geoana told reporters in Berlin. “We know that with the bravery of the Ukrainian people and army, and with our help, Ukraine can win this war.”

Ukraine said it held off Russian offensives in the east, and Western military officials said the campaign Moscow launched there after its forces failed to seize the capital, Kyiv, has slowed to a snail’s pace.

Will Putin use a nuclear weapon?

From nearly the start of the invasion of Ukraine, Russian President Vladimir Putin has teased the use of a nuclear weapon.

But most political scientists, nuclear arms experts, Western officials and seasoned Kremlin watchers say it’s highly unlikely he would detonate a nuclear weapon to break an impasse over Russia’s stalled offensive in Ukraine, now in its third month.

“If the conflict in Ukraine essentially remains an overt one between Russian and Ukrainian forces, with the West playing more of a proxy role, if we stay where we are today in terms of Western involvement in the conflict, I see no likelihood at all,” said Dmitri Trenin, until recently director of the Carnegie Moscow Center think tank.