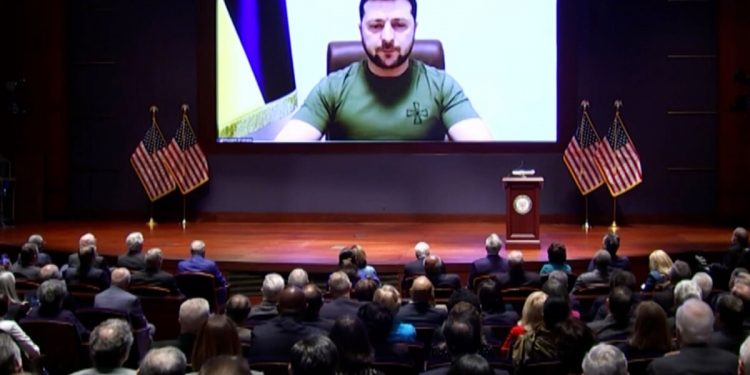 Ukrainian President Volodymyr Zelensky appealed directly to U.S. lawmakers Wednesday with an emotional request for additional financial support, weaponry and a no-fly zone to help his country fend off the Russian invasion, in a rare speech that essentially circumvented the White House and went directly to the American people.

“Friends, Ukraine is grateful to the United States for its overwhelming support, for everything that your government and your people have done for us,” Zelensky said, speaking mostly through an interpreter.

The first virtual address by a foreign leader to Congress — and certainly the first delivered by a T-shirt-clad leader in a war-torn capital — landed powerfully with lawmakers, who almost universally said that more needs to be done to help the Ukrainian people.

Zelensky’s 17-minute speech had a deeply personal, emotional appeal. He likened the Russian invasion in Ukraine to some of America’s darkest moments: Dec. 7, 1941, at Pearl Harbor and Sept. 11, 2001, in New York, Pennsylvania and at the Pentagon.

A video graphically depicted destroyed Ukrainian buildings and the escalating civilian suffering, much of it by children. Briefly speaking in English, he mourned that he sees “no sense in life if it cannot stop the deaths.”

Zelensky asked Congress for an air defense system, new sanctions on every politician in the Russian Federation and a no-fly zone over his country.

“Is this a lot to ask for — to create a no-fly zone over Ukraine to save people?” he said.

While the audience was lawmakers, the intended target was still mostly President Biden, who controls the levers of money and military supplies the U.S. can quickly send out the door.

The speech — aired in the Capitol as well as on television networks — aimed to turn up the political pressure on the president.

It “was clearly intended for an audience sitting in the White House, and I hope they were listening,” said Sen. Jim Risch (R-Idaho), the top Republican on the Senate Foreign Relations Committee. “The administration needs to step up and lead.”

In a sign of the political potency of the speech, within hours the White House rolled out a new $800-million package of aid that met many of Zelensky’s requests — 800 new antiaircraft systems, 9,000 shoulder-mounted missiles and 7,000 small arms such as machine guns.

The package will also include drone aircraft, “which demonstrates our commitment to sending our most cutting-edge systems,” Biden said in an address from the White House.

“We’re going to give Ukraine the arms to fight and defend themselves through all the difficult days ahead,” said Biden, who later called Russian President Vladimir Putin a “war criminal.”

“This could be a long and difficult battle,” he noted. “But the American people will be steadfast in our support of the people of Ukraine in the face of Putin’s immoral, unethical attacks on civilian populations.”

But Biden and many lawmakers of both major parties maintained that they would not support a no-fly zone, which they worry would result in a direct U.S. or NATO clash with Russia.

Still, even those who agree with Biden’s position on a no-fly zone acknowledged Zelensky’s right to ask the world to do all it can to save his country.

Zelensky “should be taking a maximalist position. I would if I was in his position,” said Sen. Christopher S. Murphy (D-Conn.). “Ninety-five percent of the time, we will be aligned with Ukraine. There are going to be certain moments where things he’s asking for are not in the security interest of the United States.”

His appeal may push Biden and U.S. lawmakers to more closely define the line at which they might be willing to engage directly with Russia, something few have been willing to spell out. The White House so far has ruled out any direct military confrontation with Russia.

After days of communicating with foreign heads of state, Zelensky has changed his strategy, and is speaking directly to foreign legislatures in addresses broadcast to the international public. He addressed the Canadian Parliament on Tuesday.

As the war has unfolded, Congress’ prodding of the White House to do more for Ukraine has worked. Congress pushed the White House to ban the importation of Russian oil, a prohibition Biden announced only after it became clear Congress would have done so without him.

Republicans have generally been more hawkish about greater engagement.

“Provide them the planes and they can create a no-fly zone,” said House Minority Leader Kevin McCarthy (R-Bakersfield), noting that Zelensky “has never asked for American men or women to be in a battle zone. All he’s ever asked for is: ‘Give us an opportunity to defend ourselves.’”

“Zelensky has the courage of his convictions. The question he asked the Congress and the United States government is, will we have the courage of ours?” Sasse added. “We’re a superpower. We should act like it.”

The last time Zelensky was mentioned so frequently on Capitol Hill was in then-President Trump’s first impeachment in 2019 and 2020. Trump was accused of withholding aid to Ukraine as leverage to get Zelensky to investigate Biden, who was seeking the Democratic nomination to run against him.

Now many Republicans who supported Trump during the impeachment are calling for the Biden administration to do more to defend Ukraine and Zelensky.

Rich Russians Stash up to $214B in Swiss Bank Accounts: Trade Group

Like Bella Hadid, I regret getting a nose job as a teen

Like Bella Hadid, I regret getting a nose job as a teen