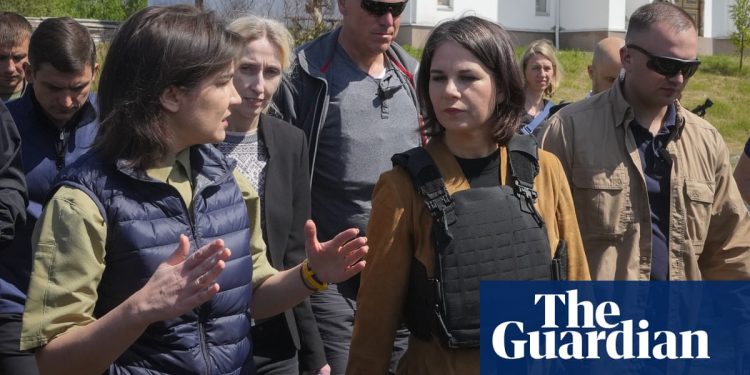 Three Russian prisoners of war accused of targeting or murdering civilians, and a soldier who allegedly killed a man before raping his wife, are set to be in the dock in the first war crimes trials of the Ukraine conflict, the Ukrainian prosecutor general has revealed.

More than 10,700 crimes have been registered since the war began by the office of Ukraine’s prosecutor general, led by Iryna Venediktova, and a handful of cases have now been filed or are ready to be submitted in what marks a watershed moment two months into the war.

Vadim Shysimarin, a 21-year-old commander of the Kantemirovskaya Tank Division, who is currently in Ukrainian custody, is expected to be the first to face trial over his alleged murder of a 68-year-old man.

It is alleged Shysimarin, a sergeant, had been fighting in the Sumy region in north-east Ukraine when he killed a civilian on 28 February in the village of Chupakhivka. He is accused of driving a stolen car with four other soldiers as he sought to flee Ukrainian fighters and then shooting dead the unarmed man on a bicycle as he was talking on his phone. He was ordered “to kill a civilian so he would not report them to Ukrainian defenders”, according to prosecutors.

The crime is said to have happened close to the victim’s house and was committed using an AK-74. The case has this week been filed at a criminal court. “He is here [in Ukraine], we have him,” said Venediktova, speaking from her heavily fortified headquarters in Kyiv.

A spokesperson added: “Prosecutors and investigators of the SBU [Ukrainian secret services] have collected enough evidence of his involvement in violation of the laws and customs of war combined with premeditated murder. For these actions, he faces 10 to 15 years in prison or life in prison.”

Separately, on 24 February, the day Vladimir Putin’s “special military operation”was launched, it is alleged two Russian soldiers using a Soviet truck-mounted 122mm multiple rocket launcher carried out artillery shelling of homes and civilian buildings in the village of Kozacha Lopan in Kharkiv district. They also allegedly hit an “educational institution” in the city of Dergachiv, from Belgorod in Russia.

The soldiers later crossed over the border of Ukraine and continued shelling targets in the Kharkiv region, it is claimed, but they were taken prisoner by Ukrainian forces and now await trial. Their case file, laying out charges of breaking the laws and customs of war, has also been filed at a criminal procedural court in Ukraine, but names and photographs are yet to be issued.

In a final case that is probably heading to a trial in absentia, a soldier named as Mikhail Romanov, who has a large tattoo of a bear on his chest, is accused of breaking into a house in March in a village in the Brovarsky region, murdering a man and then repeatedly raping his wife while “threatening her and her underage child with violence and weapons”. A second soldier also raped the 33-year-old woman, who has a four-year-old son.

The case is yet to be filed at court but the prosecutor’s office was able to provide a photograph from social media that has been used by the victim to identify the man who allegedly attacked her. Romanov’s apparent partner was contacted for comment by this newspaper but she did not respond to questions.

Of Romanov, Venediktova said: “Now we don’t know where he is – maybe he is fighting still, maybe he is on rotation in the Russian federation, maybe he is dead. We don’t know but we want to prosecute him in absentia.” She added: “We want to demonstrate to these criminals that we will find them. And we will prevent the deaths of other people in other territories.”

Venediktova, who on Monday travelled to the border with Poland to meet the UK attorney general, Suella Braverman, who has provided her with a former international criminal court judge as an adviser, said 36 identified war crimes suspects were currently being prosecuted, with various levels of progress.

Venediktova, whose office desk has a dozen hotlines, including one to Volodymyr Zelenskiy, said she feared many more crimes would emerge from the territories in the east and south of Ukraine currently occupied by Russia, including the devastated port city of Mariupol.

Venediktova, who keeps a Russian cluster bomb casing that was found in Kherson, a city in south Ukraine, on her desk, said countless atrocities were being committed.

She said: “I have a theory that the Russian federation decided that when they come to Ukraine everyone will be happy to see them but when they understood that the whole population was fighting against them, against a common enemy, they decided to do everything to scare the population.”

At the end of March videos emerged of alleged war crimes committed by Ukrainian soldiers against Russian prisoners of war, including a film that appeared to show three soldiers being shot in the legs. Venediktova said her office was continuing to investigate those claims and others.

She said: “We shall not act as barbarians but as people who understand the rule of law. We are still investigating but as I understand some of the facts could be fake. [But] there is not only one case where we started investigations, we have several.”

• This article was amended on 11 May 2022. An earlier version said Vadim Shysimarin was alleged to have killed a civilian on 18 February. The date has been corrected.