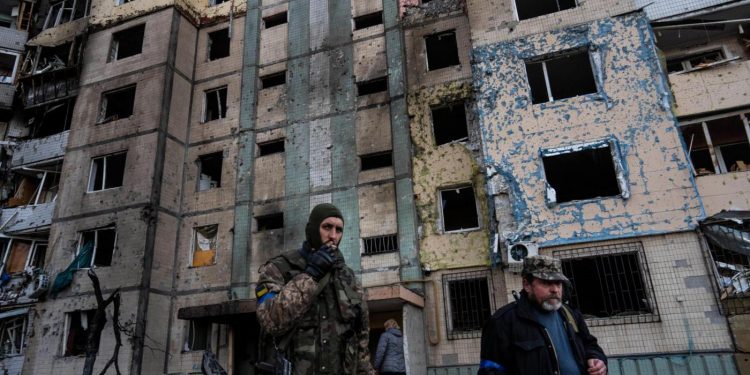 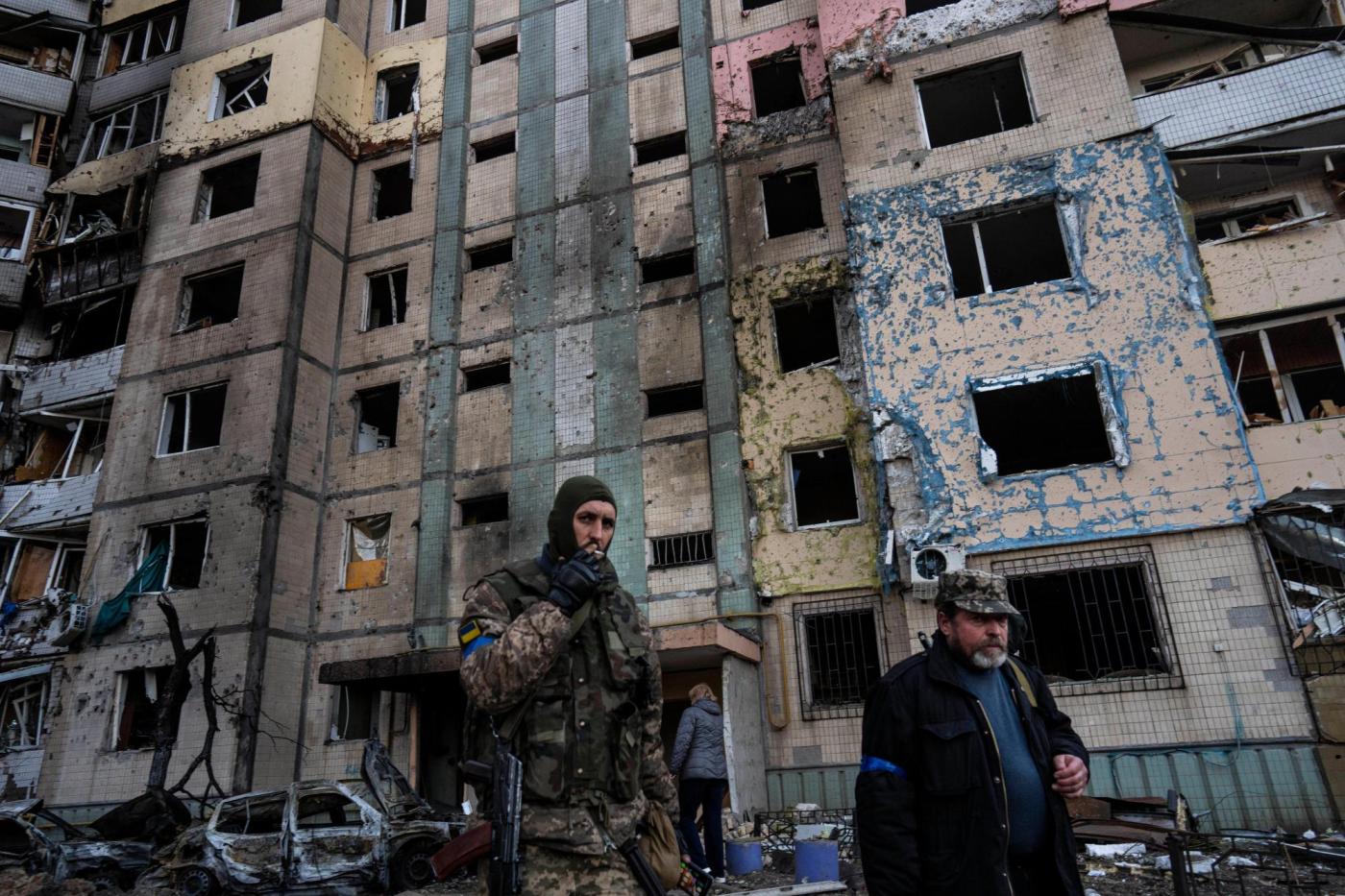 LVIV, Ukraine (AP) — Ukrainian officials defiantly rejected a Russian demand that their forces in Mariupol lay down arms and raise white flags Monday in exchange for safe passage out of the besieged strategic port city.

Even as Russia intensified its attempt to bombard Mariupol into surrender, its offensive in other parts of Ukraine has floundered. Western governments and analysts see the broader conflict grinding into a war of attrition, with Russia continuing to barrage cities.

In the capital Kyiv, Russian shelling devastated a shopping center near the city center, killing at least eight people and leaving a sea of rubble amid scarred high-rises. Ukrainian authorities also said Russia shelled a chemical plant in northeastern Ukraine, causing an ammonia leak, and hit a military training base in the west with cruise missiles.

The encircled southern city of Mariupol on the Sea of Azov has seen some of the worst horrors of the war, under Russian pounding for more than three weeks. Strikes hit an art school sheltering some 400 people only hours before Russia’s offer to open two corridors out of the city in return for the capitulation of its defenders, according to Ukrainian officials.

Ukrainian officials rejected the Russian proposal for safe passage out of Mariupol even before Russia’s deadline of 5 a.m. Moscow time (0200GMT) for a response came and went.

“There can be no talk of any surrender, laying down of arms,” Ukrainian Deputy Prime Minister Irina Vereshchuk told the news outlet Ukrainian Pravda. “We have already informed the Russian side about this.”

Mariupol Mayor Piotr Andryushchenko also quickly dismissed the offer, saying in a Facebook post he didn’t need to wait until the morning deadline to respond and cursing at the Russians, according to the news agency Interfax Ukraine.

Russian Col. Gen. Mikhail Mizintsev had offered two corridors — one heading east toward Russia and the other west to other parts of Ukraine. He did not say what Russia planned if the offer was rejected.

The Russian Ministry of Defense said authorities in Mariupol could face a military tribunal if they sided with what it described as “bandits,” the Russian state news agency RIA Novosti reported.

Multiple attempts to evacuate residents from Mariupol and other Ukrainian cities have failed or only partly succeeded, with bombardments continuing as civilians tried to flee. Mariupol officials said at least 2,300 people have died in the siege, with some buried in mass graves.

Ahead of the rejected surrender offer, a Russian airstrike hit the school where some 400 civilians were taking shelter and it was not clear how many casualties there were, Ukraine’s President Volodymyr Zelenskyy said in a video address early Monday.

“They are under the rubble, and we don’t know how many of them have survived,” he said. He said Ukraine would “shoot down the pilot who dropped that bomb.”

The strike on the art school was the second time in less than a week that officials reported an attack on a public building where Mariupol residents had taken shelter. On Wednesday, a bomb hit a theater where more than 1,000 people were believed to be sheltering. At least 130 people were reported rescued on Friday, but there has been no update since then.

City officials and aid groups say food, water and electricity have run low in Mariupol and fighting has kept out humanitarian convoys. Communications are severed.

Some who were able to flee Mariupol tearfully hugged relatives as they arrived by train Sunday in Lviv, about 1,100 kilometers (680 miles) to the west.

“Battles took place over every street. Every house became a target,” said Olga Nikitina, who was embraced by her brother as she got off the train. “Gunfire blew out the windows. The apartment was below freezing.”

The fall of Mariupol would allow Russian forces in southern and eastern Ukraine to unite. But Western military analysts say that even if the city is taken, the troops battling a block at a time for control there may be too depleted to help secure Russian breakthroughs on other fronts.

More than three weeks into the invasion, the two sides now seem to be trying to wear each other down, experts say, with bogged-down Russian forces launching long-range missiles at cities and military bases as Ukrainian forces carry out hit-and-run attacks and seek to sever Russian supply lines.

“It’s had the effect of him moving his forces into a woodchipper,” Austin told CBS on Sunday.

Talks between Russia and Ukraine have continued but failed to bridge the chasm between the two sides, with Russia demanding Ukraine disarm and Ukraine saying Russian forces must withdraw from the whole country.

U.S. President Joe Biden was expected to talk later Monday with the leaders of France, Germany, Italy and Britain to discuss the war, before heading later in the week to Brussels and then Poland for in-person talks.

In Ukraine’s major cities, hundreds of men, women and children have been killed in Russian attacks.

Ukraine’s prosecutor general said a Russian shell struck a chemical plant outside the eastern city of Sumy just after 3 a.m. Monday, causing a leak in a 50-ton tank of ammonia that took hours to contain.

Russian military spokesman Igor Konashenkov claimed the leak was a “planned provocation” by Ukrainian forces to falsely accuse Russia of a chemical attack.

Konashenkov also said an overnight cruise missile strike hit a military training center in the Rivne region of western Ukraine. He said 80 foreign and Ukrainian troops were killed, though the figure could not be independently confirmed. Vitaliy Koval, the head of the Rivne regional military administration, confirmed a twin Russian missile strike on a training center there early Monday but offered no details about injuries or deaths.

In Kyiv, eight people were killed by shelling in the densely populated Podil district not far from the city center Sunday, emergency officials said. It devastated a shopping center, leaving a flattened ruin still smoldering Monday morning in the midst of high-rise towers. The force of the explosion shattered every window in the high-rise next door and twisted their metal frames.

In the distance, the sound of artillery rang out as firefighters picked their way through the destruction. Kyiv Mayor Vitali Klitschko said Russian shelling also hit several houses in Podil. Klitschko announced a curfew in the capital from Monday evening to 7 a.m. local time Wednesday, telling residents to stay at home or in shelters. Shops, pharmacies and gas stations will all be closed.

Russian troops have been shelling Kyiv for a fourth week now and are trying to surround the capital, which had nearly 3 million people before the war.

The U.N. has confirmed 902 civilian deaths in the war but concedes the actual toll is likely much higher. It says nearly 3.4 million people have fled Ukraine. Estimates of Russian deaths vary, but even conservative figures are in the low thousands.

The Ukrainian prosecutor general’s office says at least 115 children have been killed and 148 injured.

Some Russians also have fled their country amid a widespread crackdown on dissent. Russia has arrested thousands of antiwar protesters, muzzled independent media and cut access to social media sites like Facebook and Twitter.

Associated Press writer Yuras Karmanau in Lviv, Ukraine, and other AP journalists around the world contributed to this report.

How Pharmaceutical Companies Price Their Drugs