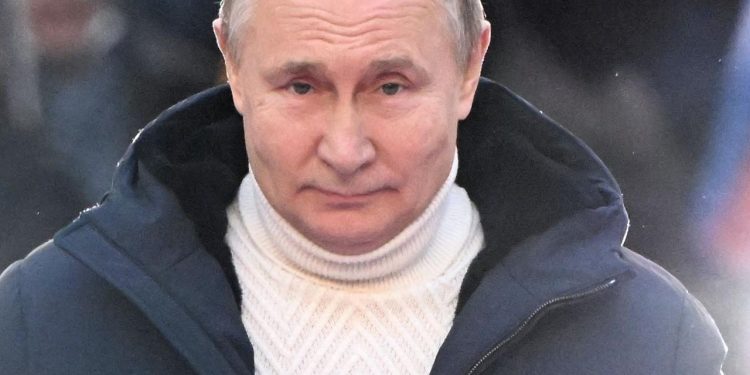 Leaders are “urgently” verifying claims Russia used chemical weapons in the besieged city of Mariupol — and they come with warnings.

Western governments say they are “urgently” trying to verify a claim from Ukrainian forces that Russia used chemical weapons in the besieged city of Mariupol.

US President Joe Biden last month said that use of chemical weapons by Vladimir Putin’s forces would trigger a “severe” response.

In the latest warnings, British Armed Forces Minister James Heappey said Tuesday any use of chemical weapons by Russia in its attacks on Ukraine “will get a response and all options are on the table”.

“If they are used at all, then [Russian] President [Vladimir] Putin should know that all possible options are on the table in terms of how the West might respond,” he told Sky News.

“There are some things that are beyond the pale, and the use of chemical weapons will get a response.”

The unverified claim of a chemical weapons attack — initially made by the neo-Nazi Azov Battalion on social media and echoed by a Ukrainian politician — comes as President Volodymyr Zelensky lobbies Western governments for more direct intervention in the war.

On Monday, the Azov Battalion claimed a Russian drone had dropped a “poisonous substance” on troops and civilians in Mariupol and that people were experiencing respiratory failure and neurological problems.

“Russian occupation forces used a poisonous substance of unknown origin against Ukrainian military and civilians in the city of Mariupol, which was dropped from an enemy drone,” the group wrote on Twitter.

“The victims have respiratory failure … the effects of the unknown substance are being clarified.”

Azov Battalion leader Andrei Biletsky later said in a video message on his own Telegram channel that “three people have clear signs of poisoning by warfare chemicals but without catastrophic consequences”.

He accused the Russians of using the chemical weapons during a strike on the city’s large Azovstal metallurgical plant.

“Victims experience respiratory failure, vestibulo-atactic syndrome. Most likely chemical weapons! This is a red line beyond which must destroy economy of despotism. We demand full embargo on all fuels from [Russia and] heavy weapons [to Ukraine] now!”

On messaging app Telegram, an aide to the Mariupol mayor wrote that a chemical attack “is not currently confirmed”.

“We are waiting for official information from the military,” Petro Andryushchenko wrote.

“We cannot confirm at this time and will continue to monitor the situation closely,” he said.

“These reports, if true, are deeply concerning and reflective of concerns that we have had about Russia’s potential to use a variety of riot control agents, including tear gas mixed with chemical agents, in Ukraine.”

UK Foreign Secretary Liz Truss acknowledged “reports that Russian forces may have used chemical agents in an attack on the people of Mariupol”.

“We are working urgently with partners to verify details,” she wrote on Twitter. “Any use of such weapons would be a callous escalation in this conflict and we will hold Putin and his regime to account.”

“Australia is working with partners to verify these reports,” she said. “Any use of chemical weapons would be a further wholesale breach of international law.”

It comes after the UK’s Ministry of Defence said phosphorus munitions had already used in the Donetsk region and could be used to break resistance in Mariupol.

A strategic port located along the Sea of Azov, Mariupol has been besieged for weeks and Ukrainian forces are warning of its imminent fall.

“[The prior use] raises the possibility of their future employment in Mariupol as fighting for the city intensifies,” the MoD said.

Pro-Russian Donetsk separatist general Eduard Basurin had spoken of the possibility of using chemical weapons against the southern port.

Basurin said the besieging forces could “turn to chemical troops who will find a way to smoke the moles out of their holes”, Russian news agency RIA Novosti quoted him as saying on Monday.

In a video message in response to Basurin’s comments, Mr Zelensky voiced concerns Russian forces could use chemical weapons in a “new stage of terror” but did not confirm whether they had already been used.

“Today the occupiers issued a new statement which testifies to their preparation for a new stage of terror against Ukraine and our defenders,” he said.

“One of the mouthpieces of the occupiers stated that they could use chemical weapons against the defenders of Mariupol. We take this as seriously as possible. I want to remind the world leaders that the possible use of chemical weapons by the Russian military has already been discussed. And already at that time it meant that it was necessary to react to the Russian aggression much tougher and faster.”

The Ukrainian leader called for tougher European Union sanctions on Russia including an oil embargo, saying “anything that does not affect oil will be received in Moscow with a smile”.

Last week, the World Health Organisation said it was preparing for “chemical assaults” in Ukraine.

“Given the uncertainties of the current situation, there are no assurances that the war will not get worse,” WHO’s Europe regional director Hans Kluge said during a briefing from Lviv.

“WHO is considering all scenarios and making contingencies for different situations that could afflict the people of Ukraine, from the continued treatment of mass casualties, to chemical assaults.”

Moscow previously claimed Kyiv could use chemical weapons against its own people before pointing the finger at Russia.

Russia has denied committing any war crimes during its military operations in Ukraine.

Mr Zelensky said on Monday he believed “tens of thousands” of people in Mariupol had been killed.

“The Russians completely destroyed Mariupol and burned it to ashes. At least tens of thousands of Mariupol citizens must have been killed,” he said, speaking by video link to South Korean lawmakers as he requested military assistance.

“But for Russia, Mariupol is just an example. Ladies and gentlemen, we’ve seen a lot of destruction like this in the 20th century.”

Two in five adults with ADHD are in excellent mental health

Two in five adults with ADHD are in excellent mental health