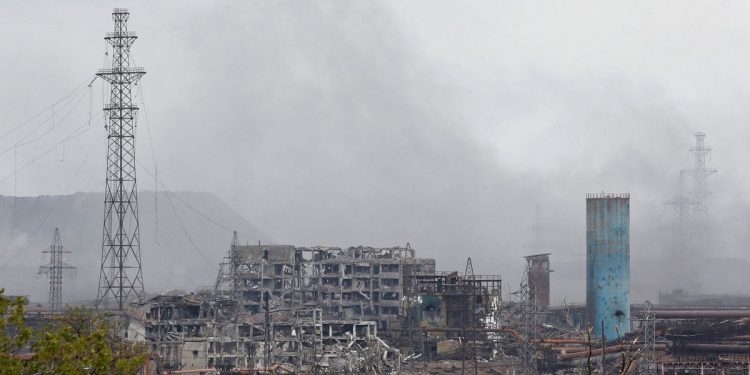 KYIV, May 14 (Reuters) – Very complex talks are underway to evacuate a large number of wounded soldiers from a besieged steel works in the strategic southeastern port of Mariupol in return for the release of Russian prisoners of war, Ukraine’s president said.

Mariupol, which has seen the heaviest fighting in nearly three months of war, is now in Russian hands but hundreds of Ukrainian defenders are still holding out at the Azovstal steelworks despite weeks of heavy Russian bombardment.

Fierce Ukrainian resistance, which analysts say Russian President Vladimir Putin and his generals failed to anticipate when they launched the invasion on Feb. 24, has slowed and in some places reversed Russian advances elsewhere in Ukraine too.

As well as losing large numbers of men and much military equipment, Russia is reeling from economic sanctions. The Group of Seven leading Western economies pledged in a statement on Saturday to “further increase economic and political pressure on Russia” and to supply more weapons to Ukraine. read more

The war has also prompted Finland and most likely Sweden to abandon their long-cherished military neutrality and seek NATO membership, a move Finnish President Sauli Niinisto defended in a telephone call to Putin on Saturday.

Ukrainian President Volodymyr Zelenskiy addressed the plight of people trapped at the Azovstal site in a late-night address.

“At the moment very complex negotiations are under way on the next phase of the evacuation mission – the removal of the badly wounded, medics,” he said, adding that “influential” international intermediaries were involved in the talks.

Russia, which initially insisted the defenders in the sprawling Soviet-era bunkers beneath the steel works give themselves up, has said little publicly about the talks.

Ukraine’s Deputy Prime Minister Iryna Vereshchuk told local TV on Saturday that efforts were now focused on evacuating about 60 people, comprising the most seriously wounded as well as medical personnel.

Moscow’s invasion, which it calls a “special operation” to disarm Ukraine and protect it from fascists, has jolted European security. Ukraine and its Western allies say the fascism claim is a false pretext for an unprovoked war of aggression.

Finland’s Niinisto told Putin his country, which shares a 1,300 km (800 mile) border with Russia, wanted to join NATO to bolster its security following the invasion of Ukraine, in what the Finnish leader’s office said was a “direct and straightforward” conversation conducted “without aggravations”.

Putin told Niinisto it would be a mistake for Helsinki to abandon its neutrality, the Kremlin said, adding that the move could harm bilateral relations.

Russia’s Deputy Foreign Minister Alexander Grushko, quoted by Russian news agencies, said Moscow had no hostile intentions towards Finland and Sweden but that it would take “adequate precautionary measures” if NATO deployed nuclear forces and infrastructure closer to Russia’s border.

A view shows destroyed facilities of Azovstal Iron and Steel Works during Ukraine-Russia conflict in the southern port city of Mariupol, Ukraine May 13, 2022. REUTERS/Alexander Ermochenko

German Chancellor Olaf Scholz, who spoke to Putin by phone on Friday, said he detected no sign of any change in the Russian leader’s thinking on the conflict.

In an interview for the t-online news website published on Saturday, Scholz also said Western sanctions on Russia would remain in place until it reached an agreement with Ukraine, adding: “Our aim is for this invasion to fail.”

In their statement on Saturday, the G7 ministers – from the United States, Japan, Germany, Britain, France, Italy and Canada – also pledged to “expedite our efforts to reduce and end reliance on Russian energy supplies”. read more

Despite Ukrainian resistance, Russian forces have made steady gains in southern Ukraine and the eastern Donbas region.

“We are entering a new, long phase of the war,” Ukrainian Defence Minister Oleksii Reznikov said in a Facebook post, predicting extremely tough weeks when Ukraine would largely be alone against an “enraged aggressor”.

In its latest bulletin, Russia’s defence ministry said its forces had hit Ukrainian command posts, ammunition depots and other military equipment in several regions, including the Donbas, killing at least 100 Ukrainian “nationalists”.

Reuters could not independently verify the report.

In a grim illustration of the toll on Russia’s own forces, Reuters footage on Friday showed the bodies of Russian soldiers being brought to a rail yard outside Kyiv and stacked with hundreds of others in a refrigerated train, waiting for the time when they can be sent back to their families.

“Most of them were brought from the Kyiv region, there are some from Chernihiv region and from some other regions too,” Volodymyr Lyamzin, the chief civil-military liaison officer, told Reuters as stretcher-bearers in white, head-to-toe protective suits lifted body bags into the box cars. read more

He said refrigerated trains stationed in other regions across Ukraine were being used for the same grim purpose.

Moscow has imposed a military-civilian administration in Ukraine’s southern Kherson region and plans to hold a referendum there on whether it wishes to join the Russian Federation, mirroring similar votes held in the adjacent Crimea peninsula in 2014 and in two Donbas regions.

Russia would almost certainly manipulate the results of such a vote, Britain’s defence ministry said.

Ukrainian forces have driven their enemies away from the second largest city, Kharkiv, near the Russian border, but Moscow was still bombarding nearby villages, including Dergachi, some 10 km (six miles) north of Kharkiv.

“I can’t call it anything but a terrorist act,” Dergachi Mayor Vyacheslav Zadorenko told Reuters after missiles struck a building used to distribute aid. read more

3 shot outside Milwaukee Bucks game. Hours later, 17 others are shot a few blocks away – CNN

3 shot outside Milwaukee Bucks game. Hours later, 17 others are shot a few blocks away - CNN