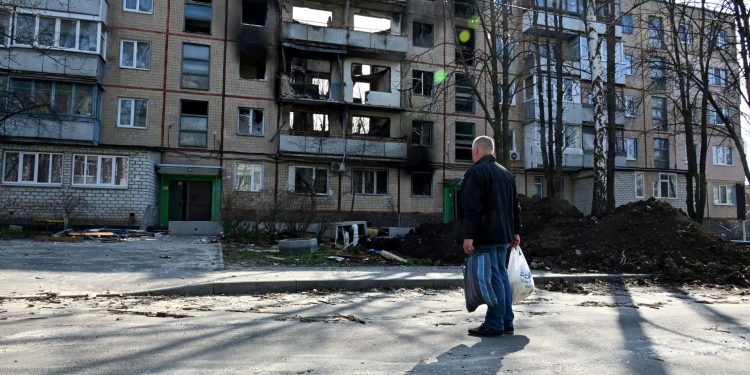 Russia said on Monday that it had used cruise missiles to destroy S-300 anti-aircraft missile systems which had been supplied to Ukraine by an unidentified European country.

Russia launched Kalibr cruise missiles on Sunday against four S-300 launchers which were concealed in a hangar on the outskirts of the Ukrainian city of Dnipro, the defence ministry said.

Russia said 25 Ukrainian troops were hit in the attack.

The planned corridors include five in the Luhansk region, three in the Zaporizhzhia region and one in the Donetsk region, Vereshchuk said.

Zelenskyy tells South Korean lawmakers that almost 300 hospitals have been destroyed in Ukraine.

Ukrainian President Volodymyr Zelenskyy has addressed South Korean lawmakers, telling the country’s Parliament that tens of thousands of people have likely been killed in Russia’s offensive on the besieged port city of Mariupol.

“Even despite that the Russians haven’t stopped the attack, they want to do so that Mariupol will be an example,” Zelenskyy said, according to a translation.

He accused Russia of targeting and destroying Ukraine’s infrastructure, including nearly 300 hospitals, and warned tens of thousands of Russian forces are being readied for the next offensive.

“There is no hope that Russian rational thinking will prevail and Russia will stop. Russia can only be forced to do this,” Zelenskyy said.

German Foreign Minister Annalena Baerbock says there are “massive indications” of Russian war crimes in Ukraine, adding it is essential to secure all evidence, according to Reuters.

“We have massive indications of war crimes,” Baerbock said ahead of a meeting with European ministers in Luxembourg, Reuters reported. “In the end, the courts will have to decide, but for us, it is central to secure all evidence.”

“As the German federal government, we have already made it clear that there will be a complete phase-out of fossil fuels, starting with coal, then oil and gas, and so that this can be implemented jointly in the European Union, we need a joint, coordinated plan to completely phase out fossil fuels to be able to withdraw as a European Union,” Baerbock said.

This photograph shows a partially destroyed five storey residential building in the Ukrainian city of Kharkiv, on April 10, 2022, amid the Russian invasion of Ukraine.

The head of the Kharkiv regional administration, Oleh Sinegubov, said Russian forces had launched approximately 66 strikes in the northeastern city and nearby points within 24 hours.

Sinegubov said 11 civilians were killed in the attacks, including a 7-year-old, while 14 people were wounded. The affected areas include Saltivka, Pyatihatky, Kholodna Hora, Pisochyn, Zolochiv, Balakliya and Derhachi.

CNBC has not been able to independently verify this report.

“We are seeing the activity of enemy reconnaissance aircraft in the region,” Sinegubov said via Telegram, according to a translation.

Ukraine’s Foreign Minister Dmytro Kuleba has urged Western lawmakers and media not to be fooled by Russian disinformation.

Ukraine’s Foreign Minister Dmytro Kuleba has warned Western lawmakers about the prospect of a “massive” Russian disinformation campaign over the imposition of sanctions and the supply of weapons to Ukraine.

“Russia knows arms supplies are essential for Ukraine and mobilizes all efforts to undermine them,” Kuleba said via Twitter.

“Moscow prepared a massive info campaign targeting foreign media and politicians. Their troll factory may spam emails and flood comments with [disinformation] on Ukraine. Don’t fall for it,” Kuleba said.

French bank Societe Generale has agreed to sell its stake in Rosbank and the Russian lender’s insurance subsidiaries to Interros Capital, an investment firm founded by Russian billionaire Vladimir Potanin.

The bank’s exit from Russia comes after mounting pressure to follow in the footsteps of other Western companies in the wake of the Kremlin’s invasion of Ukraine.

SocGen said in a statement that it would have a 2 billion euro ($2.1 billion) write-off of the net book value of the divested activities and an exceptional non-cash item with no impact on the Group’s capital ratio of 1.1 billion euros.

The ministry warned Russian forces that prior use of phosphorus munitions in the Donetsk Oblast “raises the possibility of their future employment in Mariupol as fighting for the city intensifies.”

It also said Russia’s “continued reliance on unguided bombs decreases their ability to discriminate when targeting and conducting strikes while greatly increasing the risk of further civilian casualties.”

Ears of wheat are seen in a field near the village of Hrebeni in Kyiv region, Ukraine July 17, 2020.

Ukraine’s economic output will likely contract by a staggering 45.1% this year as Russia’s invasion has shuttered businesses, slashed exports and destroyed productive capacity, the World Bank said on Sunday in a new assessment of the war’s economic impacts.

The World Bank also forecast Russia’s 2022 GDP output to fall 11.2% due to punishing financial sanctions imposed by the United States and its Western allies on Russia’s banks, state-owned enterprises and other institutions.

The World Bank’s Eastern Europe region, comprising Ukraine, Belarus and Moldova, is forecast to show a GDP contraction of 30.7% this year, due to shocks from the war and disruption of trade.

For Ukraine, the World Bank report estimates that over half of the country’s businesses are closed, while others still open are operating at well under normal capacity. The closure of Black Sea shipping from Ukraine has cut off some 90% of the country’s grain exports and half of its total exports.

Don’t Sleep On The Threat Of Real Estate Wire Fraud

Don't Sleep On The Threat Of Real Estate Wire Fraud