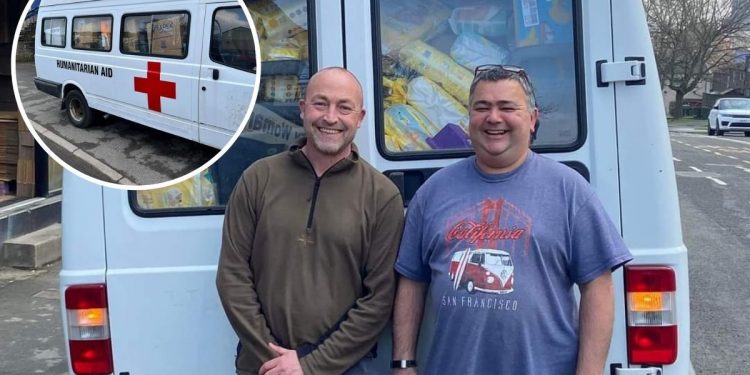 A WHITTINGTON-based street trader who undertook a mercy dash to a Ukrainian city says he is fundraising for another journey soon.

Mick Thompkins trades in Oswestry at The Curry Stall, but last week he drove to Ukraine to deliver essential items in Lviv, close to the Polish border.

He travelled thousands of miles, including 1,000km in one day, Mick explained his motivation for wanting to help and how the journey was far from smooth even before he arrived.

“I was sitting there watching the TV and saw how whole lives were being decimated, and I just thought I should try to do something to help them,” he said.

“My co-driver is from Leeds where there is a charity called Focus4Hope – we picked up stuff of our own and then Focus gave us lots of nappies and medical kits, and also enabled us to get a transport note to get us across the Channel.

“We had lots of mishaps along the way, in terms of insurance and being booked on the Eurotunnel where the bosses pulled out all the stops for us.

“And because it’s an old van we had trouble with that but the recovery encouraged us to drive it, after we had booked into a hotel.

“The following day we covered 1,000km across the day, meeting others along the way including a Ukrainian who lived in Australia and whose dad had business in Britain.

“They decided to buy a few cars to take over to Poland and volunteering from there.

“The van wouldn’t start again so we got some jump leads and I saw a car in the car park, with an old guy in his early 70s who didn’t speak English but knew we were going to Ukraine.

“He gave us a jump start, and I wrote over Google translate what we were doing and he just broke down crying.”

While there has been minimal fighting in Lviv, as it is west of the main invasion, Mick said he arrived to a city on full alert.

He added: “We were in Lviv which is away from most of the fighting but as soon as we got through border control, it was a different feeling.

“You could see the sadness on people’s faces, and the extra checkpoints that were stopping you on the major roads that we travelled on.

“In Lviv, where we met out contact, there was a pretty serious checkpoint with a tight chicane and they were paying close attention to those that travelled through it.

“When we were coming out on the bus to get to Krakow Airport later, you could see they had stepped up their checkpoint searches.”

Could a computer ever learn the same way people and animals do?