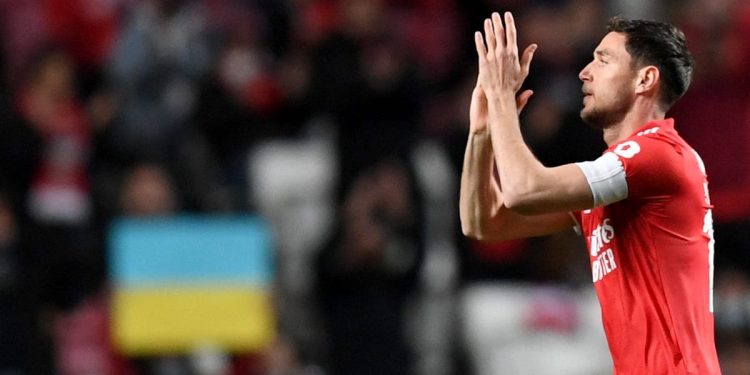 
A Ukrainian soccer player was moved to tears during a match on Sunday when the audience in Portugal’s Estadio da Luz stadium gave him a standing ovation in support of his homeland.

Roman Yaremchuk, a striker for Lisbon-based club Benfica, was called to enter the match against Vitória just after the one-hour mark. Benfica’s captain, Belgian soccer player Jan Vertonghen, approached Yaremchuk and handed him the captain’s armband.

Fans in attendance at the packed Estádio da Luz stadium were then seen rising to their feet and cheering as Yaremchuk headed onto the field. Some audience members were seen holding anti-war banners and signs, some of which said “We Are With You” and “Stop War.”

Yaremchuk was seen looking visibly emotional at the display of support.

Benfica also released a video on Twitter, which showed players donning armbands in the colors of Ukraine’s flag.

According to CNN, other Ukrainian players like Everton’s Vitaliy Mykolenko and Manchester City’s Oleksandr Zinchenko have also received similar support from their fans. The players were seen embracing each other before their teams clashed at Goodison Park on Saturday.

Meanwhile, Atalanta midfielder Ruslan Malinovskyi expressed his feelings about the Ukrainian conflict on Thursday. After scoring against Olympiakos in a Europa League match, Malinovskyi revealed a shirt scrawled with the message “No War in Ukraine.”

FIFA and UEFA have also banned all Russian clubs and national teams from competing internationally.

“Football is fully united here and in full solidarity with all the people affected in Ukraine,” the organizations said in a statement on March 1. “Both Presidents hope that the situation in Ukraine will improve significantly and rapidly so that football can again be a vector for unity and peace amongst people.”

Insider’s live blog of the Russian invasion of Ukraine is covering developments as they happen.

Vincent Simmons is free after 44 years in prison

Vincent Simmons is free after 44 years in prison