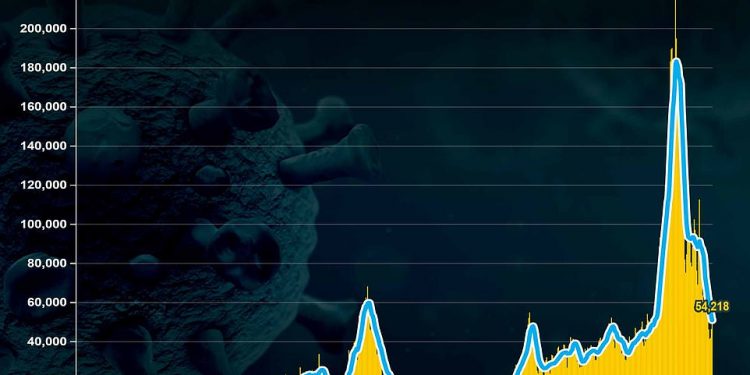 
Britain’s Covid wave has fallen on all fronts again according to official statistics, which show that cases, hospitalisations and deaths are all trending downwards.

Government dashboard data revealed another 54,218 Covid cases were recorded over the last 24 hours, down a fifth on the tally from last Wednesday.

Infections have been consistently falling for over a fortnight and data released today from a major surveillance study confirms the decline.

The Office for National Statistics (ONS) estimates England’s outbreak shrunk by 13 per cent last week, based on random testing of 100,000 Britons.

Daily data shows there were 199 Covid deaths, which marks a 27 per cent fall in a week.

Latest hospital figures showed 1,096 Covid patients were admitted to wards on February 12, the smallest number of daily admissions for eight weeks. It was also down eight per cent in seven days.

And the number of Covid patients in hospitals across England fell below 10,000 for the first time since the end of 2021. A total of 9,804 patients were recorded as of 8am this morning, the lowest figure since December 28.

The latest figures will further encourage Boris Johnson to push ahead with his plans to ‘live with’ the virus, which will see the final Covid curbs — including self-isolation — scrapped.

Under the plans, the Prime Minister is also thought to be considering ending free lateral flow tests next month and dropping contact tracing for contacts of positive cases. 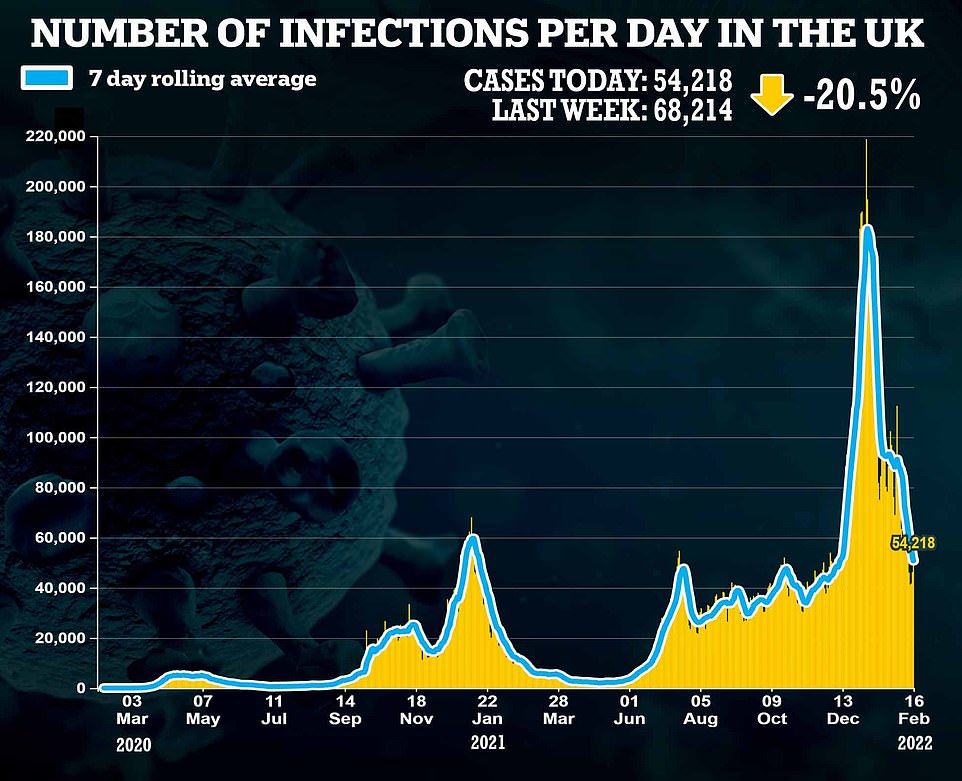 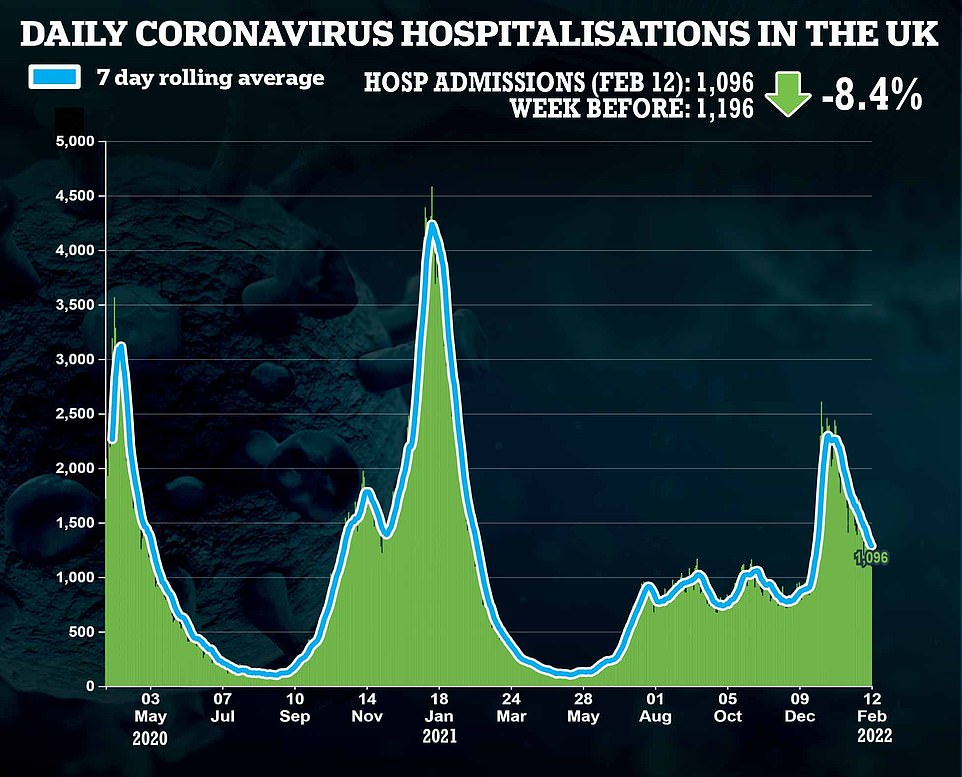 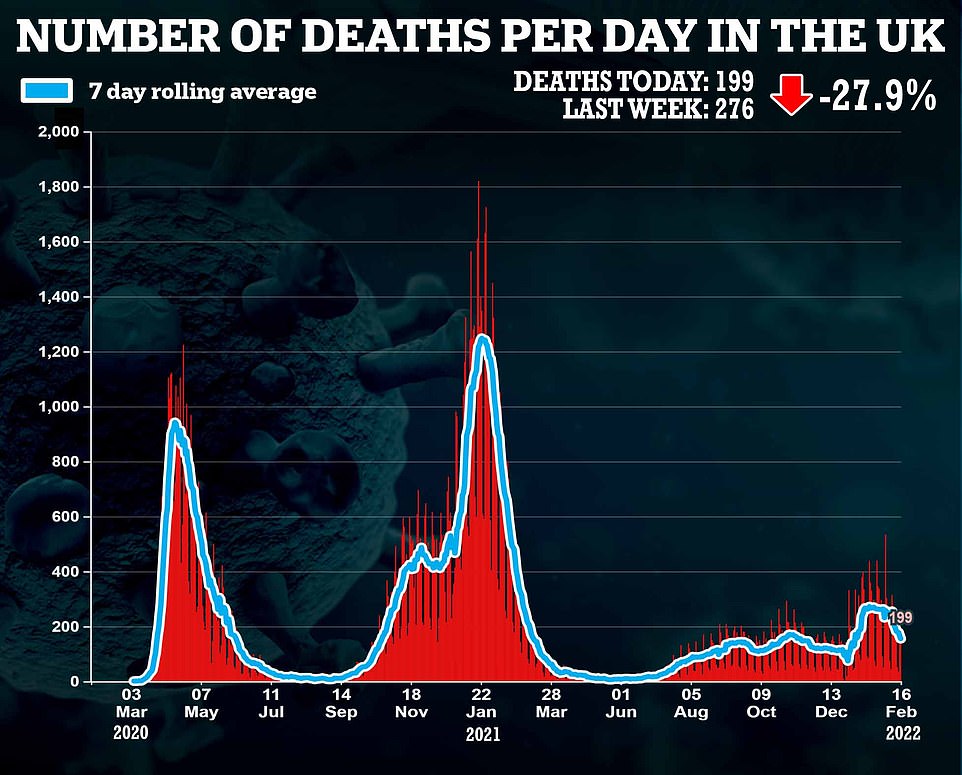 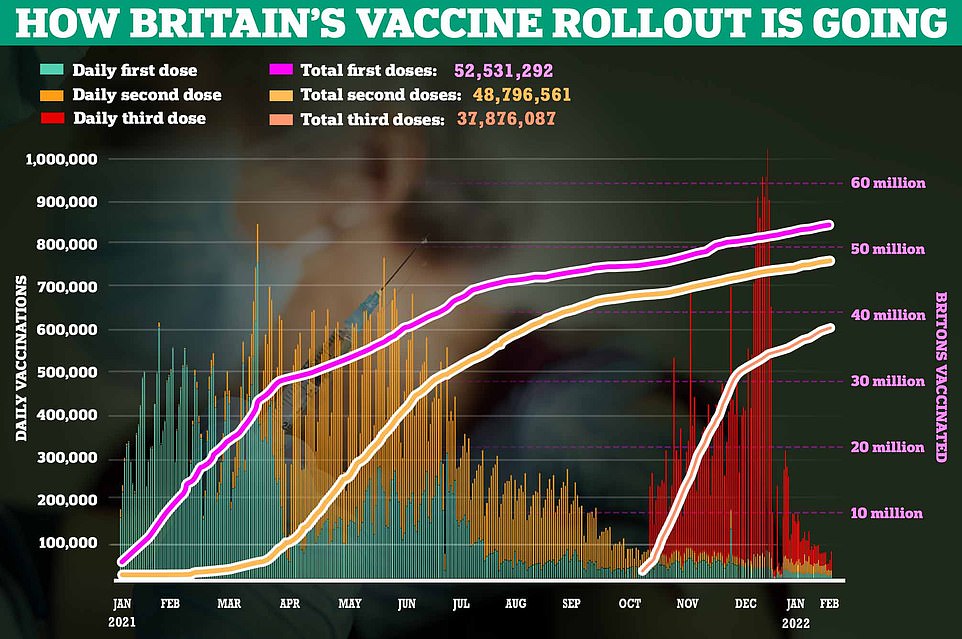 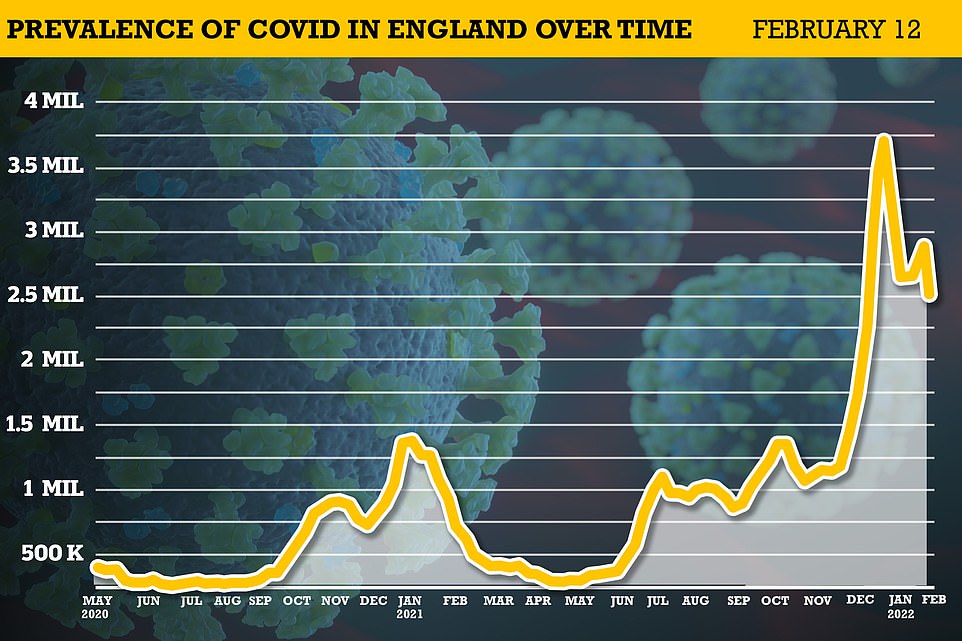 Latest testing figures show almost a fifth fewer swabs are being carried out a week, with 880,000 tests done on February 15.

But the positivity rate — the proportion of swabs that detect the virus — is also trending downwards, suggesting that the fall in cases is genuine and not just down to fewer tests.

And the number of patients infected with the virus in hospital is continuing to drop. Fewer than 10,000 Covid patients are in hospitals in England.

The figure spiked at 17,120 on January 10 — although this was only half of the level seen at the peak last winter due to high levels of protection from vaccination and previous infection, as well as the dominant Omicron strain triggering less severe illness.

And around a half of all Covid patients in England’s hospitals are being treated primarily for something else, up from a quarter in the autumn of last year.

England will start offering Covid jabs to ALL over-5s

Healthy children aged five to 11 in England will be offered two Covid jabs on a ‘non-urgent’ basis, it was announced today.

No10’s vaccine advisers have said that the jabs will protect a ‘very small number of children from serious illness and hospitalisation’.

Officials stressed that the offer is not urgent because Covid poses such a tiny risk to healthy children. Its main purpose is to safeguard youngsters against future waves.

The Joint Committee on Vaccination and Immunisation (JCVI) has warned the jabs should not be prioritised over other childhood vaccinations in this age group.

It highlighted that MMR and HPV vaccine uptake has plummeted during the pandemic, believed to be due to the emphasis placed on the Covid jab rollout.

The move comes after Scotland and Wales both announced they were expanding their vaccine programmes after accepting the JCVI’s recommendations.

Roughly 5million more children are now eligible for the jabs and will be given them 12 weeks apart. The Government aims to offer a first dose to all eligible children by April.

But only half of children aged 12 to 15 have received a Covid vaccine in England and just a fifth have had two doses – raising questions about public demand for the move.

The JCVI believes around 85 per cent of primary school-aged children have already had Covid and have some immunity.

Unlike with previous expansions of the vaccine rollout, the JCVI’s update made no mention of the jabs’ impact on infection rates.

Two doses have been shown to offer as little as 10 per cent protection against Omicron, but immunity against moderate and severe disease is much higher.

It came as separate figures from the Office for National Statistics (ONS) showed England’s outbreak shrunk by 13 per cent last week, confirming the Omicron wave is receding.

Unlike the daily numbers which rely on people coming forward for tests, the ONS can estimate cases in those that would not normally get tested because it relies on 100,000 random swabs a week.

They estimated 2.4million people had Covid on any day during the week to February 12 — equivalent to one in 20 people — down from 2.8million over the previous seven-day spell.

Cases dropped in every region except the South West, where the trend is ‘uncertain’, they said, and across every age group.

Wales followed the same pattern, where cases also dropped (down to 112,600).

London had the highest Covid case rate in England (5.27 per cent), the ONS said.

It was followed by the South East and East of England (4.8 per cent).

It comes as healthy children aged five to 11 in England were today offered two Covid jabs on a ‘non-urgent basis’.

No10’s vaccine advisers said the jabs would protect only a ‘very small number of children from serious illness and hospitalisation’.

Officials stressed that the offer is not urgent because Covid poses such a tiny risk to healthy children. Its main purpose is to safeguard youngsters against future waves.

The Joint Committee on Vaccination and Immunisation (JCVI) has warned the jabs should not be prioritised over other childhood vaccinations in this age group.

The move means roughly 5million more children are now eligible for the jabs, to be given 12 weeks apart. The Government aims to offer a first dose to all youngsters by April.

Amid the falling cases England is preparing to shift to a ‘living with’ the virus strategy the same way it does with the flu.

Mr Johnson is expected to unveil the plan — currently being thrashed out with ministers — when Parliament returns from recess on Monday.

But plans to end free lateral flow tests three months earlier than planned faced opposition from Labour leader Sir Keir Starmer today, who told the Guardian it would be a ‘mistake’.

Sir Keir told the newspaper that his party will oppose the end of free testing but he is said to have stopped short of calling for self-isolation rules to continue.

The devolved governments in Scotland and Wales have both warned against scrapping free testing. 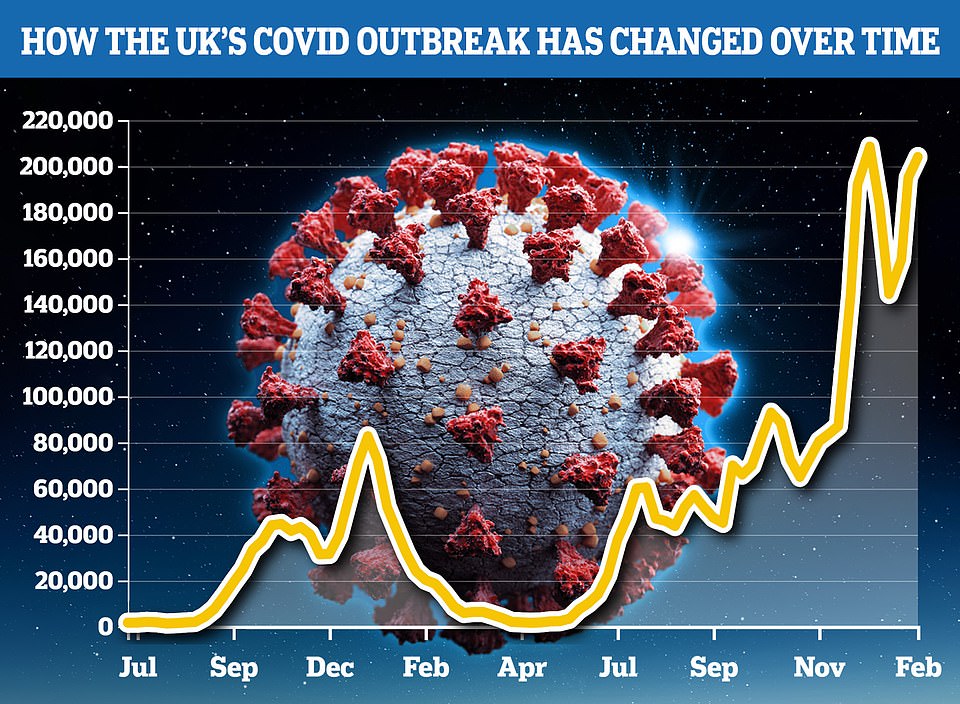 King College London scientists estimate there were 203,973 new daily symptomatic cases in the week ending February 7, up 4.5 per cent on the 195,068 recorded last week 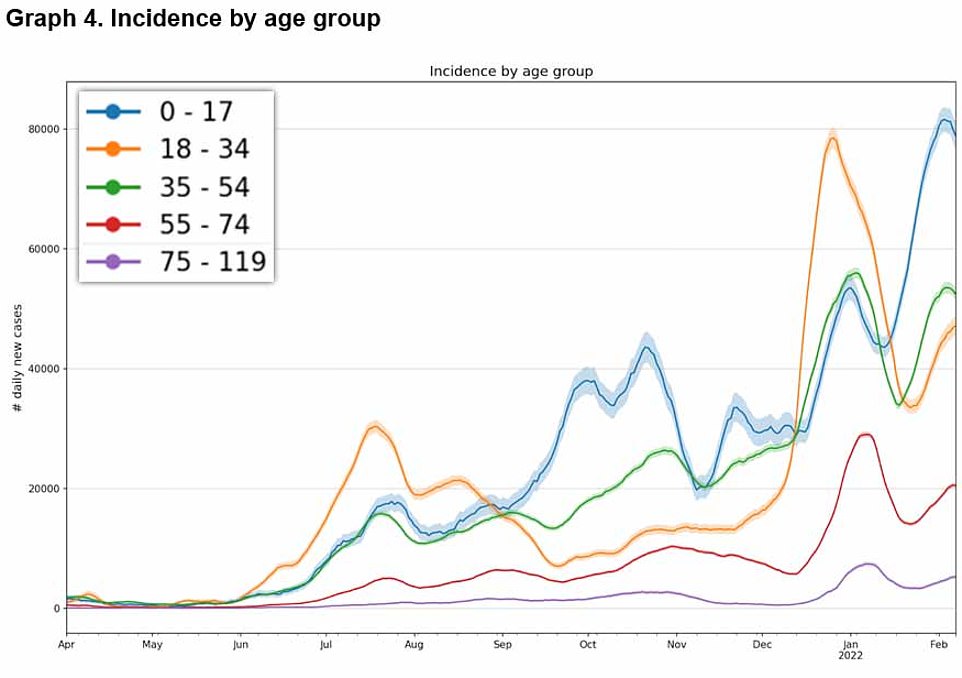 Cases remain highest in children aged under 18 (blue line) at around 80,000 per day, although they appear to now be falling in the age group. They are slowing in all age groups other than those aged 18 to 34 (orange line) and the most vulnerable over-75s (purple line), although the latter is still seeing the lowest daily numbers at under 7,500. Other lines: 35 to 54 (green), 55 to 74 (red) 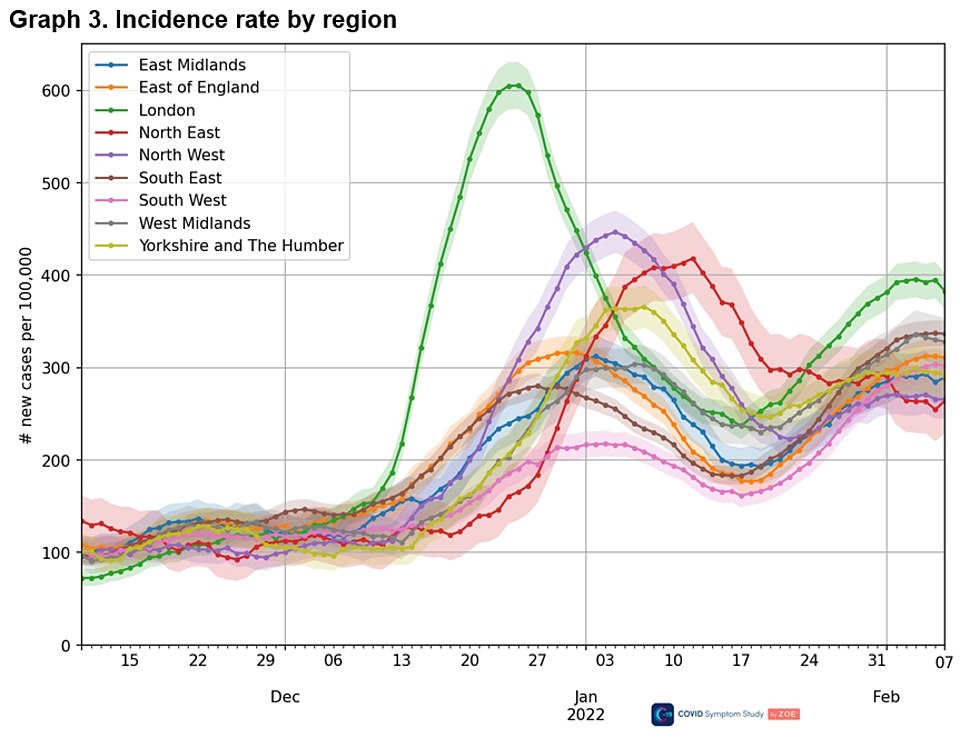 Prevalence is highest in Northern Ireland, where one in 19 people are thought to have the virus, with 8,389 cases estimated a day in total. It was followed by London, where one in 20 were infected and there were 34,080 new daily cases. Wales had the lowest prevalence (one in 36), with just 6,737 total daily cases

But the Treasury believes the estimated £10billion a year cost of the testing operation is not sustainable and has been pushing for it to be scaled back.

A Government spokesman said no decisions had been made on ending free testing.

They said: ‘We’ve previously set out that we’ll keep the provision of free testing under review as the Government’s response to Covid-19 changes.

Some long Covid symptoms could be caused by the virus damaging a vital nerve, a study suggests.

Scientists believe inflammation to the vagus nerve could explain some of the broad and seemingly unrelated range of symptoms that can plague survivors months after beating the illness.

Long Covid, the umbrella term for symptoms ranging from neurological to digestive, heart and lung problems, has puzzled scientists throughout the pandemic.

The vagus nerve is the longest nerve in the body, connects vital organs including the brain, heart, lungs and intestines, and controls muscles used for swallowing. Experts describe it as the ‘motorway’ of the nervous system.

Scientists from a hospital in Spain conducted tests on 350 long Covid patients and quizzed them on their symptoms to determine whether the nerve was linked to the lingering health problems.

Results from their preliminary analysis, based on 20 patients, shows symptoms such as gastrointestinal problems and an elevated heart rate were linked with damage to the vagus nerve.

The researchers said their findings, not published in full or peer-reviewed, suggest structural changes to the vagus nerve are a ‘central’ feature of long Covid.

‘No decisions have been made on the provision of free testing. Everyone can continue to get free tests and we are continuing to encourage people to use rapid tests when they need them.

Last week a symptom-tracking study also suggested that Covid cases had peaked across the country.

King College London researchers say 200,000 people were falling ill with the virus every day in the week ending February 7, flatlining at just 4.5 per cent higher than last week’s estimates.

Professor Tim Spector, lead author on the study, warned the figure is still ‘far too high’ but insisted it is ‘reassuring to see signs of rates slowing’.

The figures were based on 50,000 swab tests from hundreds of thousands of app users in the fortnight ending February 7.

The ZOE study has been criticised previously for being biased, with app users choosing to report cases rather than based on random samples of the population.

Critics also believe the way it works — based on people reporting symptoms of the virus — makes it hard to definitively differentiate between Covid and other viruses that trigger tell-tale symptoms.

Its estimates have significantly diverged from the Government’s own case figures and other major surveillance studies on numerous occasions throughout the pandemic.

Professor Spector said: ‘Although the true rate of new cases — unlike the Government dashboard — is currently far too high, it is somewhat reassuring to see signs of rates slowing down.

‘And it looks like we’ve now passed the second big peak of the year, with hospitalisations, ICU cases and deaths also continuing to fall.

‘Cases need to decline more among older and more vulnerable age groups before we can start to relax, and it’s still too early to tell the effects of Long Covid as a result of an Omicron infection or the effect of the super infectious BA.2 variant that continues to increase nationally.

‘Despite the Government’s hasty decision to end all restrictions this month, and the message this sends, this does not mean the pandemic is over and we should all try to be good citizens by continuing to self-isolate when ill and protect ourselves and others from what can be a really nasty infection.’

ZOE’s data has previously been criticised for getting the state of the pandemic wrong, saying the ‘Omicron wave has finally peaked’ in January 13 before today’s report claimed it has hit its second peak of the year.

It also said cases had ‘peaked for 2021’ in November before the emergence of the Omicron variant.